Will Write for Food

I’m smacked around for publishing at Quillette. 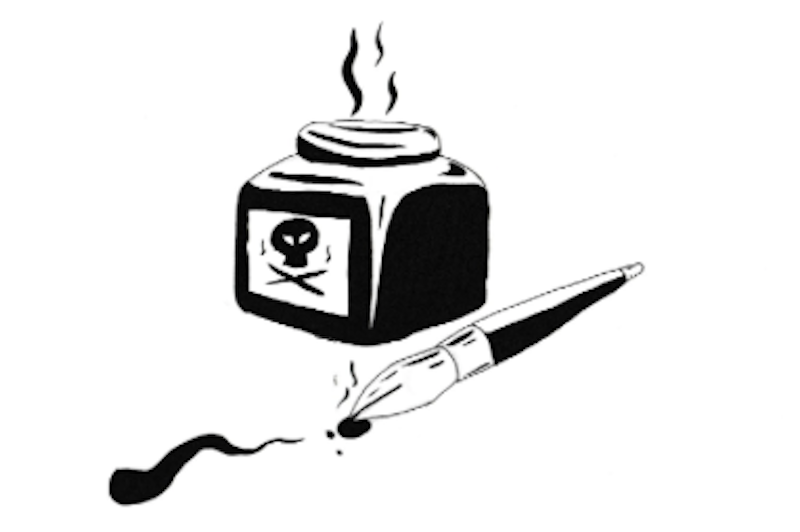 I come from a long line of writers: my father, both grandfathers, a great-grandfather, and many aunts and uncles. Sartwells, Bernsteins, Gitlins, etc. have written for everyone at one time or another. Great-grandpa wrote a campaign biography: Herbert Hoover: The Man Who Brought America to the World (and did it without drones). My father started as a reporter for the Washington Star and then worked as a writer and editor for National Geographic and Science News. He kept getting fired, though, possibly due to acute alcoholism. Then he sobered up, but still had to make a living. He edited a nuclear-energy industry association's magazine for awhile, and then cobbled together a living as a freelancer.

Frank Sartwell tried to sell me on the idea that one could always make a living with a pen (or in his case with a Royal typewriter and Pall Malls). I remember walking around Northwest Washington with him circa 1970 as he gave me some Bazooka bubblegum, which came with little folded-up comics. He read me one of Bazooka Joe's brief adventures, and then did his rap: "Someone got paid to write this. People will always need writers." I spent a lot of time rebelling against my father, but somehow took that one to heart.

Basically, if you're paying I'm playing. (Maybe you're not paying that much, and I’ve never actually made a living as a writer. But I depend on it to supplement my income as an academic.) I don't worry a lot about the outlet. I don't try to track down the magazine's or website's ultimate ownership (though I'm aware, for example, that the Koch brothers, or brother, have or has a role in funding Reason, where I have a piece coming out, I hope). I don't examine the editorial staff's Twitter feeds. "If I wrote anywhere but Splice," a friend of mine who goes by @MUGGER1955 wrote me recently, "I'd publish in The Nation or Breitbart. I don't really give a shit."

I feel the same. I take responsibility for what I say, but not what some other writer, randomly assigned to the block next to me, might once have said. Yet I find that this sort of ideological test is commonly applied today: you can be associated with anything ever published in an outlet that publishes you, and condemned on that basis. We're thinking of ideology as an inky or pixilated infection.

Last week, I published a piece on the website Quillette. Founded by Aussie Claire Lehmann, Quillette has frequently been associated with the "Intellectual Dark Web" (IDW). It's not left-leaning, though if you rummage around you'll find pieces from a number of different orientations. They've sparked controversy here and there: on James Damore's once-infamous Google memo, for example. They're pretty obsessed with attacks by the woken on free speech on campus. And the sort of reaction they've provoked often provides excellent examples of the intolerance they condemn.

Anyway, I didn't realize a lot about this when I pitched Quillette; I just eyeballed it, found it interesting and various, and thought it would be a good place to land an essay that had been rejected by The New York Times. It struck me that it might be read as sort of right-wingy and that Quillette might like it better than the people who edit the Times' philosophy column The Stone.

They accepted it quickly, paid a small fee, which is the sort of thing that still makes me feel like I'm carrying on the family business.

I was surprised by the responses I got on Twitter and in a number of emails. Almost nobody wrestled with my argument; rather, they focused on the sheer fact that it was in Quillette. Actual philosophy professors seemed to argue that where it was published showed it was false, or that it doesn't at all matter whether it is, just that it was published in Quillette and hence associates me with people they repudiate, and thus refutes my reasoning and my very person.

"Crispin," wrote @nathanoseroff, "not a good look to publish on the pro-eugenics, pro-‘culture war’, anti-trans website started by a far-right explicitly anti-feminist Australian that previously worked for The Blaze, a Canadian anti-Muslim disinformation website." In the course of our discussion, he added, "Guess a website dedicated to mainstreaming eugenics doesn’t cross the line." What he objects to, he said in the subsequent discussion, is "mostly the explicit pro-eugenics propaganda, really." I tried to get Nathan to show me the pro-eugenics editorials, but to do that would force him to link stuff that he repudiates, and that was a non-starter. Googling "quillette eugenics" produced only a review that presupposed that eugenics was wrong and disgusting.

But at any rate, even if Quillette published something that someone could construe as pro-eugenics, that doesn’t make me an advocate of eugenics, which I repudiate. This guilt-by-association approach to publications and publication ends up attributing thousands of contradictory opinions to everyone who writes opinion journalism for many outlets.

On Facebook, I posted the piece with the tag line "First time in Quillette." "May it be your last," commented Thomas Nadelhoffer. "It's not in keeping with good intellectual company in my eyes." He was milder than Oseroff, though, conceding that The Wall Street Journal is okay. "Having read what was said to you [by Oseroff] and this response," tweeted @chrisiousity, "I think you may not be the guy to answer the questions of what 'rationality' means. No wonder you ended up in Quillette." No wonder, indeed, as publications (even the Times, for example) become evermore ideologically pure. I’ve been driven in recent years toward right-associated outlets, though I definitely don’t consider myself to be a rightist. But I'm not a leftist either, and that's enough to get you exiled.

But Nathan Oseroff-Spicer is at least consistent, and condemns himself on the same grounds:

Oseroff regretted having appeared in THE on the basis of this article. But this is getting sad: Oseroff-Spicer is going to quickly make it impossible for himself to advocate his positions in any outlet, or at least an outlet that has any readers who don't already agree with him. And what will he have accomplished?

It's true that I wouldn't write for the Daily Stormer or the official organ of the Communist Party anywhere. So there are some lines, I acknowledge. But Quillette (or Reason, or the Nation) don't come anywhere close to that line, in my opinion. And a publication that showed the degree of intellectual purity that the people emailing me are demanding would be an extremely boring propaganda organ. That's the direction we're headed, but is that what you really want?

It's a pleasure to be in Splice Today, for example, but I’m not taking responsibility for the positions of Noah Berlatsky or Todd Seavey; I'm not obliged by the proximity of our bylines to endorse the dysfunctions of Rooster Quibbits nor to affirm the sea glass of Mary McCarthy, though I do. On the other hand, these poor suckers may well be discredited by their proximity to me, who once wrote something for Quillette.

At any rate, doing things like writing for Hoover or the nuclear industry (or indeed fraternizing with Warren G. Harding) run in my family. Editors: Tweet me.