You’ll Check In, But You Can’t Check Out

A review of Stephen King’s The Institute. 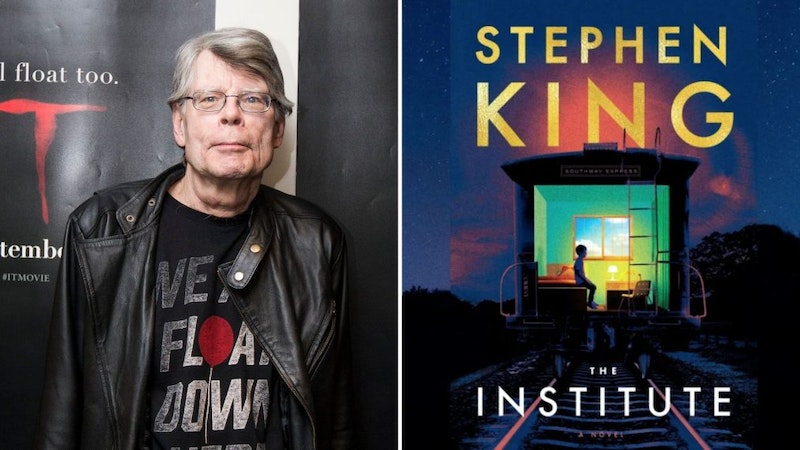 Tim Jamieson, a divorced, middle-aged ex-Florida cop, abandons a flight from Tampa to NYC on a whim, opting to hitchhike north, drifting. Eventually he settles in as a “night knocker” with the police force in DuPray, South Carolina. Luke Ellis, a 12-year-old genius with mild telekinetic abilities, wakes up in what appears to be his bedroom—but subtle differences exist, and there are no windows. He wanders out into… a dormitory hallway, full of chillingly banal motivational posters. Jamieson and Ellis don’t know what they’re in for yet, and neither do we.

The world of The Institute is recognizably a gloss on our own: all doubts, digital whirlwinds, municipal budget cuts, conspiracy theories, uncertain futures, and fucked politics. But this novel posits an alternative universe where telepathic and telekinetic teens and pre-teens are conscripted, clandestinely, into a cruel, mission-oriented service that amounts, incidentally, to genocide. If that notion somehow sounds both terrifying and pedestrian—like cheap YA knockoff pulp—it’s worth remembering that this is a Stephen King book.

His introductory sally, focusing on Jamieson, is long, languid, and measured almost to a fault; you might wonder, even while enjoying the drift, where is this going? King gently romanticizes the lure of the open road, lingers lovingly on trains and railroads, and sketches quick, effective character studies that feel lived in. Jamieson’s persona and background is teased loose until we essentially know who he is and what he’s capable of. Then we’re introduced, in the same ambling, rich, expository rhythm, to Ellis. Though we don’t really know him, just yet, at the point where multiple characters are efficiently assassinated via that same measured, casual prose. The way this is rendered isn’t especially jarring—which is in itself unsettling. What follows is a malfunctioning emotional rollercoaster you couldn’t pay me to get off of; it’s damning, horrific, gripping and cathartic.

King’s Constant Readers—those fabled stalwarts who’ve read everything he’s written, from Cujo to The Tommyknockers to The Stand to Doctor Sleep—know that he’s a shameless, enthusiastic juggler of literary genres. The Institute itself is comparable to a masterful DJ set, sublimely synthesizing various familiar elements into a thriller as electrifying as Michael Crichton’s Jurassic Park: World War II histories, Logan, Looper, Minority Report, the plot of the New Mutants movie supposedly coming out later this year, the first Zoolander, and the author’s own Carrie and The Dark Tower VII: The Dark Tower. (He limits himself, this time, to a single mild, indirect self-reference, to Stanley Kubrick’s adaptation of The Shining.)

Scenes late in the book, where young people are gathered and induced to focus on video clips of prominent men, have a specific situational purpose but resonate a little differently in our own here and now. I was struck by and reminded of the ways in which we collectively fixate on icons and iconoclasts, channeling our energies, longings, and antipathies in their direction—attention and interaction that is harnessed, monetized, and weaponized. It’s information, entertainment and propaganda, presented as a sort of freedom or inalienable right. It’s presented as painless.

This is where I warn you—even as I try to minimize spoilers—that The Institute of the title is not a painless place; it’s a “school” of very hard knocks, lots of them, in a manner that may remind you of things you’ve heard about (or experienced personally) the military, in prisons, in juvenile or mental institutions. As the plot coalesces, King employs a strategic mercilessness designed to invest us in this story and remind us, pointedly, of how pervasive man’s inhumanity to man is—to say nothing of older generations’ willingness to blithely exploit children in myriad, unforgivable ways—and has always been, and always will be.

A blessing: these writerly cruelties are contemporary, wrought by the woke, Twitter-fluent Grandpa Stephen of today rather than blackout-prone, coke-binge Uncle Steve from the late-1970s and early-1980s, a damaged guy whose xenophobic, prurient extremes and exhausting, italicized flashbacks would’ve doomed this story to modern irrelevance (and would’ve probably run 1200 laden, interminable pages instead of a fleet, affecting 550). Like his similarly excellent 11/22/63, The Institute strikes a careful balance between realism and compassion—and will have your heart wriggling in its grasp long before you realize it.