The indictment of an innocent man in America. 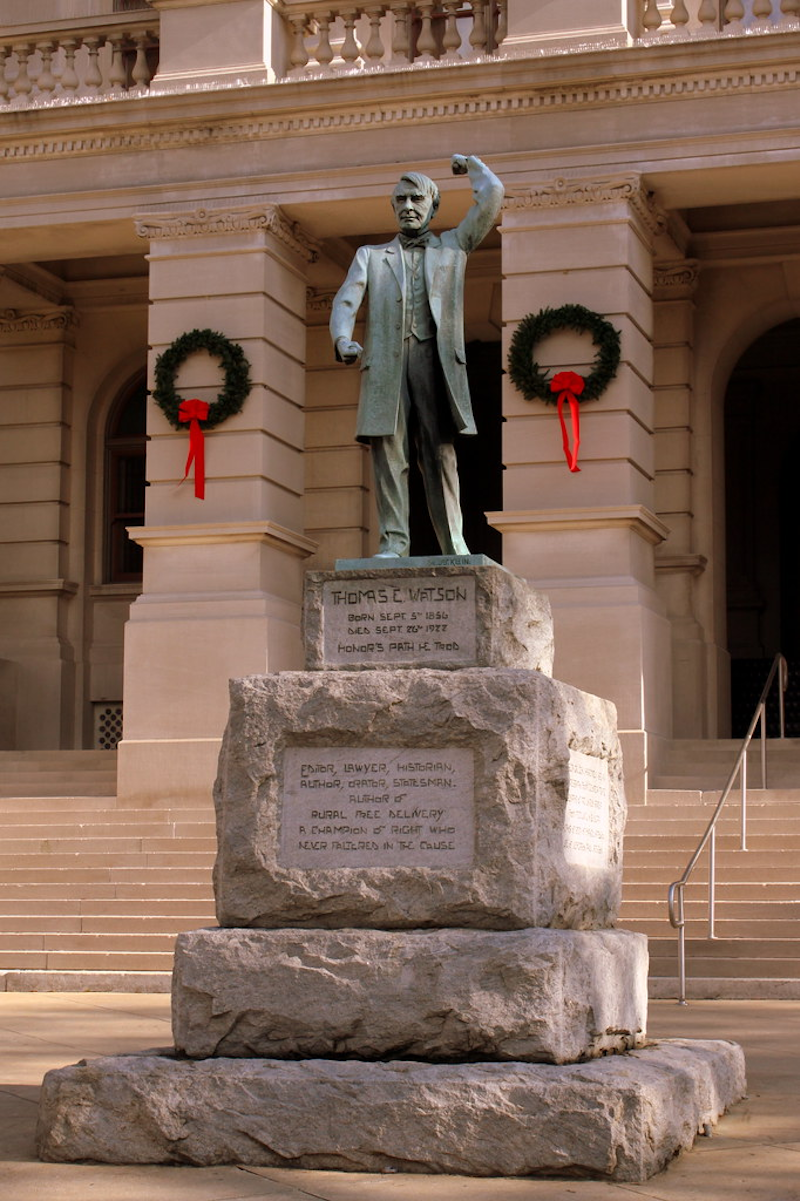 Leo Frank, born on April 17, 1884, grew up in Brooklyn. In August 1908, he moved to Atlanta to supervise a family business, the National Pencil Factory. In early April 1913, one of its employees, Mary Phagan, was laid off for lack of work. She was a pretty girl, nearly 13, and was owed back wages of $1.20. Everyone now agrees that, on April 26, 1913, Confederate Memorial Day, a day of parades and ceremonies in Atlanta, she stopped by the factory for her money. Leo Frank was working in his office and paid her.

At three a.m. on April 27, Newt Lee, a Negro watchman, found Mary’s strangled, blood-soaked body in the factory’s basement. The Atlanta police arrested Lee and another Negro, Jim Conley, a janitor who’d been seen washing blood from a shirt shortly after the incident. Then Leo Frank was arrested: Police insisted that Frank had been the last person to see her alive.

On May 24, he was indicted for murder. Hugh M. Dorsey, the prosecutor, wanted higher office and hoped to gain it by convicting Mary Phagan’s killer. The police and prosecution swiftly committed themselves to a theory of Frank’s guilt. They began releasing carefully chosen information to reporters, who apparently filled in the gaps with hearsay. The three Atlanta dailies, the Atlanta Constitution, the Journal and the Georgian, also assumed Frank’s guilt and fought to exploit the story’s sensational details.

Gossip that Frank was a pervert was printed as news under bold headlines. As the public responded to the media prompts by demanding Frank’s conviction, the police quietly disregarded far more considerable evidence pointing to Conley, whom Dorsey began preparing for trial as his main witness.

Frank’s trial opened on July 28, 1913. It lasted 25 days in the heat of a Georgia summer. Throughout the trial, the streets outside the courthouse were jammed by mobs, drawn by the sensational press coverage. Men standing in the courtroom windows shouted play-by-play commentary down to the crowd as vendors hawked refreshments. Dorsey heavily relied on Conley, who testified that he’d been Frank’s lookout while the supervisor had forced himself on female employees; that he’d found Frank standing over Mary’s body and had helped him carry it downstairs. Dorsey called several female ex-employees of National Pencil. They all testified that they had a bad opinion of Frank’s character, although they couldn’t provide concrete examples of his immorality.

Dorsey’s summation lasted three days, with thousands packing the streets for blocks around the courthouse, roaring “Hang the Jew!” The judge advised Frank and his lawyers not to attend the verdict’s reading for fear of their lives. In this way Frank was convicted and sentenced to death.

Most Georgians believed Frank’s guilt had been proven beyond a reasonable doubt. Surprisingly, so did many of the reporters who had covered the trial for the national media, such as Herbert Asbury, author of Gangs of New York.

But outside Georgia, many believed Frank had been railroaded. Frank’s family and friends spent tens of thousands of dollars to finance his appeals to the Georgia Supreme Court and then to the Federal courts.

Nearly a year after Frank’s conviction, the Atlanta Journal, a conservative, pro-business newspaper, published an editorial calling for a new trial. As a red rag to a bull was this to Thomas Edward Watson, and so one of the most remarkable Georgians of his time rose up against Frank. The folk songs call Watson “a man of mighty power,” and in his time he inspired all emotions save indifference. A lean, red-haired 59-year-old lawyer and editor, a radical Democrat and revolutionary, Watson combined intellectual tastes with a genius for rabble-rousing demagoguery. More than 20 years before, he’d served one term in Congress, calling for taxing the rich, regulating railroads and utilities, and the eight-hour day. Repeatedly defeated as a People’s Party congressional and presidential candidate, he used his time out of public life to practice law, write bestselling histories and biographies, and edit his weekly newspaper, the Jeffersonian.

When he returned to the Democratic Party in 1908, Watson’s platform of tax and fiscal reform and railroad regulation also included white supremacy. To Watson, reform required an all-white electorate: He believed the Negro would invariably sell his vote to the rich for a few dollars. He had his way by 1910 and thereafter dominated state politics. Until his death, no governor was elected without his support or at least his acquiescence.

Watson had refused a $5000 retainer to defend Frank; he’d declined to assist the prosecution. Indeed, he had publicly said nothing about the case. But the Journal had always opposed Watson, who saw the editorial as an opening shot in a “gigantic conspiracy of big money” to corrupt the state’s courts, government, and press to save the life of a wealthy murderer. Week after week, Watson attacked Frank, using every slimy rhetorical device in his newspaper and speeches: rumor, half-truth, merciless slander. Thus, as C. Vann Woodward wrote, he played masterfully upon every prejudice of his people: chivalry, sectional animus, race prejudice, class consciousness, state pride.

“How much longer is the innocent blood of little Mary Phagan to cry in vain to Heaven for vengeance?” he asked.

“Yes,” Watson wrote, “she was only a factory girl… She had no millionaire uncle; she had no… kinsmen ready to raise fifty thousand dollars for her…” Thus, “while the Sodomite who took her sweet young life basks in the warmth of today, the poor child’s dainty flesh has fed the worms.” His feverish, prurient rhetoric knew no limits. Frank was “the lecherous Jew… the lascivious pervert guilty of the crime that caused the Almighty to blast the Cities of the Plain… Here we have the typical young libertine Jew who is dreaded and detested by the city authorities of the North for the very reason that Jews of this type have an utter contempt for law, and a ravenous appetite for the forbidden fruit—a lustful eagerness enhanced by the racial novelty of the girl of the uncircumcised.” He even argued that Frank’s guilt was apparent from his photographs: “those bulging, satyr eyes… the protruding fearfully sensual lips; and also the animal jaw.”

All appeals were denied. The Georgia State Pardon and Parole Commission refused, by a 2-1 vote, to recommend clemency. Frank’s execution was set for June 22, 1915. Thus, Frank’s life came to lie in the hands of Governor John Slaton, who’d been elected with Watson’s support in 1912. Slaton’s last day in office was the day before Frank’s execution. He would be succeeded by Nat E. Harris, a Watsonite. Through a mutual friend, Watson promised Slaton that if Slaton did nothing—let Harris’ administration hang Frank—Watson would support him for U.S. senator.

Watson had mistaken his man. Slaton, a gifted lawyer who would much later serve as President of the Georgia Bar Association, read the entire record of the case: the transcripts, briefs, and papers, and he concluded that Frank’s conviction was not supported by evidence beyond a reasonable doubt. The decision wasn’t easy. Finally, he confided in his wife, who told him to follow his conscience: “I would rather be the widow of a brave and honorable man than the wife of a coward.” On the day before his term ended, Slaton commuted Frank’s sentence to life at hard labor, saying, “Two thousand years ago, another governor washed his hands of a case and turned over a Jew to a mob. If today another Jew were lying in his grave because I had failed to do my duty, I would all through life find his blood on my hands.”

Martial law was declared for Slaton’s protection. Armed guards escorted him to the capitol for his successor’s inauguration. When Slaton rose to present the state seal to Harris, the gallery rose to its feet, booing. Harris later wrote that, as the two men left the house chamber, persons on the stairs and in the vestibules began hissing. More than 1000 jeering people were outside the main entrance, and a man attempted to assassinate Slaton as he entered a waiting automobile. That night, 5000 men marched on Slaton’s house, armed with revolvers, pistols, sticks, axes, knives and dynamite sticks. The National Guard fired on the crowd, finally driving them off at bayonet point. Slaton left the state the next day. He wouldn’t return for a decade.

Watson wrote, “We have been betrayed! The breath of some leprous monster has passed over us, and we feel like crying out, in horror and despair, ‘Unclean! UNCLEAN!’” Under the headline, “When ‘Mobs’ Are No Longer Possible, Liberty Will Be Dead,” he defended the assault on Slaton’s home, calling the attackers “as fully respectable a mob as those that took the tea from the British ship in Boston.”

Some two months after Frank’s transfer to the state prison farm at Milledgeville, eight vehicles carrying 25 armed men from Marietta, Georgia, arrived there around 11 p.m. on August 16, 1915. Only two men bothered to wear masks. They handcuffed the warden and superintendent and subdued the guards. Frank protested that he wasn’t properly dressed. “Don’t bother with the clothes,” they told him. “Come just as you are.” Then they took him on a seven-hour drive over the 120 miles back to Marietta, which had been Mary Phagan’s original home. Near Frey’s Mill, they stopped at an oak tree and tied a length of manila rope into a hangman’s coil. Frank asked them to remove his wedding band after his death and return it to his wife. His murderers promised they would do so and they did. Then they tossed the rope over a limb, placed the noose around Frank’s neck, lifted him onto a table, tightened the rope and kicked the table from under him. As Frank swung from the tree, they walked away.

Toward morning, a crowd gathered to celebrate. Some cut snippets of rope or tore shreds from Frank’s clothing as souvenirs. One zealot stamped on Frank’s face. Frank’s body was rushed to an Atlanta undertaker, where the authorities ordered the corpse publicly displayed. That night, the body was quickly embalmed and placed on a train for New York.

According to research compiled by professor Stephen Goldfarb of Emory University, the lynchers were among Marietta’s leading citizens: a former governor, state senators and representatives, mayors, judges, and prosecutors. Nonetheless, the grand jury found that Frank had died “at the hands of persons unknown.” No one stood trial for Frank’s murder.

Jim Conley died in 1962, his life a monotonous litany of petty crimes and imprisonments. John Slaton never held public office again. Leo Frank was buried in Mount Carmel Cemetery in Ridgewood, Brooklyn on August 20, 1915. A musical about the events leading to his death, Parade, reached Broadway in 1998: it won the Tony Awards for best book and best score. Mary Phagan lies in Marietta’s old cemetery. Her family still believes in Frank’s guilt.

Thomas E. Watson was elected a U.S. Senator in 1920 and died in 1922. He was, according to the Library of Congress, an assiduous reader of books on many subjects. Ten years after his death, a 12-foot tall bronze statue, sculptor Joseph S. Klein showing him in full peroration with fist raised to Heaven, was erected on the State Capitol’s steps.  It remained there for over 80 years. On November 29, 2013, Governor Nathan Deal ordered it moved to a park across the street. The fiery orator now stands before an empty square, motioning action from a nonexistent crowd.

Its plinth is graven: HONOR’S PATH HE TROD.