Wander around Glen Oaks, Hollis Hills, and Hillcrest and see what’s out there. 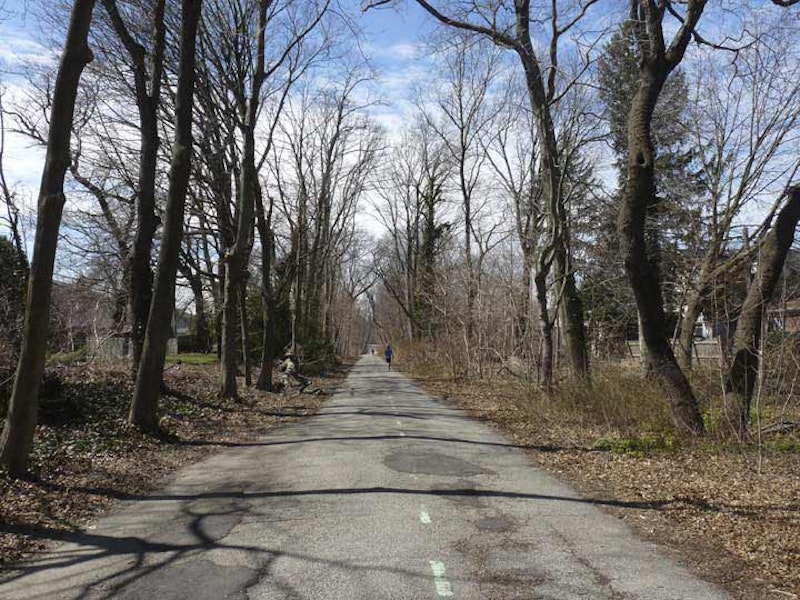 I moved to Flushing in 1993 after 35 years in Brooklyn to be closer to a job in Nassau County. I’ve lived in Queens since, within walking distance of the Long Island Rail Road (which acts like a subway, with frequent local stops, on the Port Washington Branch in northern Queens, though with a round trip daily rush hour fare of $20 without a discount monthly ticket, it’s geometrically more expensive than a mere subway; for temp jobs of short duration, I spend $5.50 daily with lengthy bus-subway transfers).

I was impressed with how wide the roads are in eastern Queens when I rode a bicycle around the area in the 1990s and into the 2000s. Near Nassau County, these are realms unplumbed by subway lines, and with scant bus service (some lines are rare or absent on weekends) and just the Port Washington LIRR, which serves a specific area, leaving most of eastern Queens without subways or railroads, this is the land of the auto. I’ve never driven a car, and get around Eastern Queens exclusively by foot. Today, I’ll wander around in Glen Oaks, Hollis Hills and Hillcrest and see what’s out there. 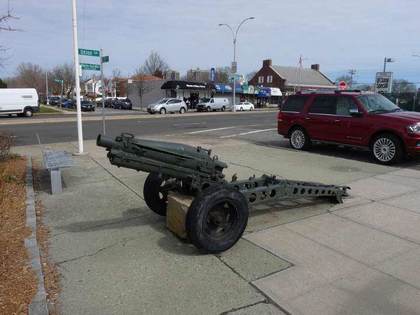 I was surprised to find a mounted artillery weapon on Union Turnpike at 80th Ave. and 252nd St. The Stein-Goldie Veterans Square, marked by both a Department of Transportation sign and brown Parks Department sign, was dedicated in 1943 with donated 75MM Howitzer M1. The square was dedicated in the year the weapon reached peak production. To my surprise the howitzer wasn’t named for its inventor, but comes from the German word houf, for “crowd.” Original howitzer weapons were fired into charging cavalry. 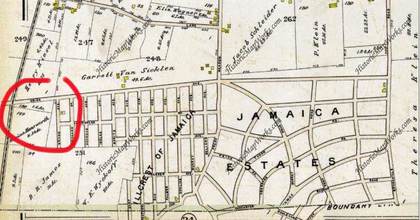 A lengthy stretch of Union Ave. between Metropolitan Ave. and Brushville Rd. (which evolved into 188th St.) was laid out by 1909. The road was extended both east and west, reaching to Myrtle Ave. and 88th St. in Glendale in the west and in the east, the Nassau County Line; Union Turnpike extends east briefly to Marcus Ave. in New Hyde Park.

There may have been a plan to toll the road at one time—hence its renaming as a Turnpike—but once Greater New York consolidated in 1898, those plans were likely scrapped. (I don’t see any photographic record of any tollhouses on the road, unlike postcards I’ve seen featuring tollhouses on Jamaica Ave., originally Jamaica Plank Rd.) 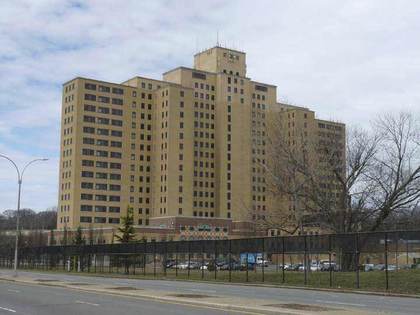 Building 40 of the Creedmoor Psychiatric Institution is among the tallest buildings in eastern Queens, exceeded only by the North Shore Towers apartments in Glen Oaks. The Creedmoor Psychiatric Facility was founded in 1912 as the Farm Colony of Brooklyn State Hospital. Before that, it was the Creedmoor Rifle Range (which had been established by the National Rifle Association in 1871 and was here until 1891).

At its peak, it housed some 7000 patients. They tended gardens and raised livestock on the hospital’s grounds. The hospital contained gymnasiums, a swimming pool, a theater, a television studio, and giant kitchens and laundries where patients were put to work. “Deinstitutionalization” began in the 1960s and accelerated in the 1980s, and today much of the campus looks run-down and abandoned. Still, you’ll find one of NYC’s oddest museums on the grounds south of Union Turnpike, the Living Museum, whose works are all supplied by those undergoing treatment here. 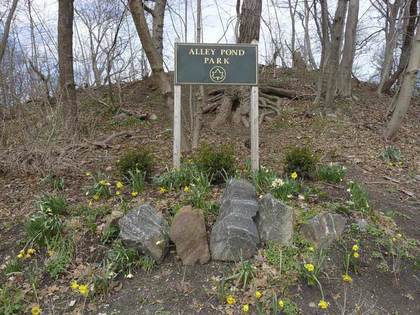 In 1790, and well into the 20th century, there were few good roads in eastern Queens. What is now West Alley Rd. runs through a valley between two hilly areas left by a retreating glacier 150 centuries ago, and the lone road through was called “the alley” on early maps. A number of roads through the area took its name. In the early-19th century, Alley Rd. became Douglaston Parkway and East Alley Rd. became 61st Ave.; only West Alley Rd. retains its old name.

President George Washington visited the plant nurseries of Flushing in 1789 and made a return visit to Queens and the rest of Long Island on a five-day swing the following year. Beginning April 20, he made a 165-mile round-robin journey from Brooklyn to Jamaica, Long Island’s South Shore, Patchogue, north to Setauket, Smithtown, Huntington, Oyster Bay, Roslyn, and Flushing, returning home to his Manhattan mansion on April 24. Washington was on his final leg of the tour when passing Alley Rd.

The area now constituting the 635-acre Alley Pond Park was occupied by the Matinecock Indians in the pre-colonial era. After their violent ouster by Thomas Hicks in the 1700s the region remained mostly rural with the exception of mills harnessing water flowing into Alley Creek. A general store in the Alley surprisingly survived between 1839 and 1929. The store went out of business and was razed when the City acquired the acreage to turn it into Alley Pond Park. The new park’s ribbon was cut by Mayor Fiorello LaGuardia in 1935. 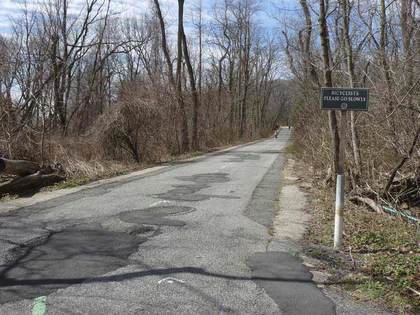 The Alley Pond Park entrance at Union Turnpike and Winchester Blvd. also is the eastern end of what was built as the Long Island Motor Parkway in Queens. The road was constructed in 1908 as a venue for industrialist heir William Kissam Vanderbilt’s Vanderbilt Cup Race. It was one of the first auto races and attracted drivers from the world over. It replaced an earlier route of the race held on Jericho Turnpike and other public Long Island roads.

After a 1910 accident in which four people were killed and 20 injured, the US capital of auto racing shifted to Indianapolis, Indiana. The Motor Parkway became a public toll road, and remained in that role until 1938 when it was supplanted by lengthier roads like the Grand Central Parkway. In 1926, the Motor Parkway was extended west to Fresh Meadows, and a surviving section between Fresh Meadows and Alley Pond Park was turned over to runners, walkers and bicyclists after the autos departed. 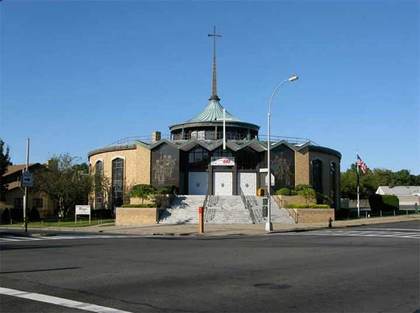 The saucer has landed at Union Turnpike and Bell Blvd., where you find the American Martyrs Roman Catholic Church, built in 1967. The martyrs were eight Jesuit missionaries to the Huron Indians in the 17th century. All eight were killed during a Huron conflict with the Iroquois in what is now Quebec and upstate NY between 1642-1649.