There’s nothing worse than soggy greens drowned in oil and vinegar. 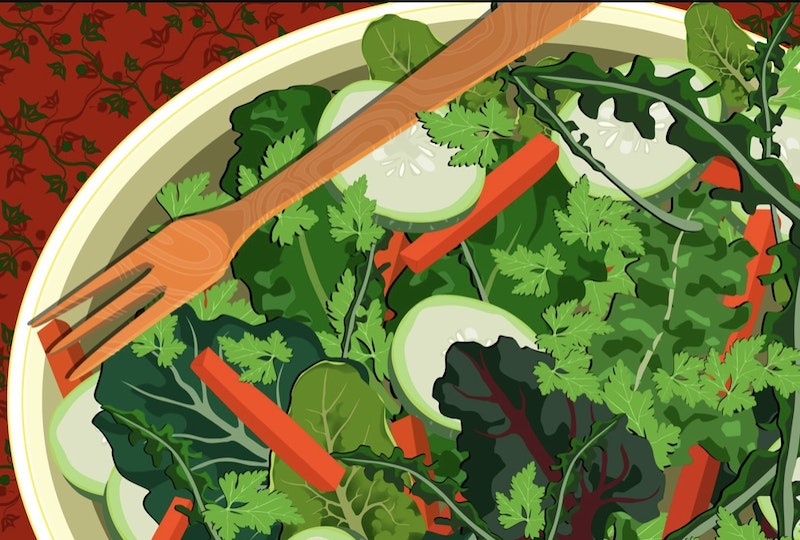 A friend of mine uses the fried calamari metric to judge a restaurant’s quality. At its most pure, the dish has just a few ingredients. Squid. Some kind of flour for dredging. Seasoning. And oil for deep frying. I don’t count lemons or marinara here as you could technically omit them. Yet with so few ingredients, calamari is incredibly easy to screw up. If the oil isn’t the right temperature, the outcome is greasy mush. Cook it too long and the squid becomes rubbery and the crust inedible. In my friend’s mind, if the restaurant can’t get calamari right, there’s no hope for the rest of the menu.

I use the same metric for salad, because the potential for something going wrong is higher, especially when the dish in question is an entrée. Eating a few slimy calamari and putting the rest of the appetizer to the side is a letdown, but if the main attraction is a disappointment, then dinner is ruined because there’s nowhere left to go. It’s not like you’ll pony up for dessert.

Freshness should be a given but it’s not. Tomatoes past their prime, shaved carrots with freezer burn, and cauliflower with dark mold spots. If you’re going to eat even halfway healthy, you should at least be presented the healthiest version of what you ordered. A diner would not put up with rancid meat or fish. Some restaurants act like salads are expendable.

There’s a fine line between creativity and madness. A mélange of ingredients is acceptable, especially when they complement each other. Bitterness of arugula with sweetness of peaches, for instance. Steak is a nice component for juicy tomatoes and robust greens. When it looks like the chef dumped everything in the pantry into one bowl without any sort of consideration, it’s as visually chaotic as it is unpleasant tasting. Canned chickpeas with fried tortilla strips and dried cranberries shouldn’t be in the same bowl. It reminds me of the joke you hear people say when they’re piling everything together on their plate with no compartmentalization: It’s all going in the same stomach. But isn’t it better if you enjoy eating it while it’s going down?

The next place salad can go wrong is the dressing, which should be treated as a supporting actor and not the star. There’s nothing worse than soggy greens drowned in oil and vinegar. Whoever made it might be related to the same person working at the grocery store check-out line who has to ask their customer if the green bulbous item they’re trying to scan is a leek or a scallion. It’s easy to forgive the person ringing them up for this lack of knowledge. But if you’re preparing them in a restaurant, especially an upscale one, a knowledge of vegetables and how much dressing is necessary should be a part of the hiring process.

The perfect salad also demonstrates knife skills. Or hand-skills if the greens have been torn in that manner. Presenting an entire roast pig to a dinner table is a feast for the eyes. The same can’tbe said of the chef who didn’t take the average mouth size into consideration when making a Caesar salad with lettuce so large the diner has to choose whether to gnaw on one stalk at a time, or awkwardly try to cut an entire head of greens in an eight-inch-bowl. At that point you might wish for extra dressing if only to avoid needing your date to perform the Heimlich maneuver.

It’s important to keep in mind that the type of dressing can make or break a salad. This lays the ground rules for what constitutes an actual salad. Honey-mustard shouldn’t be on a salad. It shouldn’t even be on the menu. Other counterfeit salad dressings: Buffalo wing sauce. Salsa. Next time, order the nachos or the buffalo wings. It’s hard enough to get a good salad as it is.