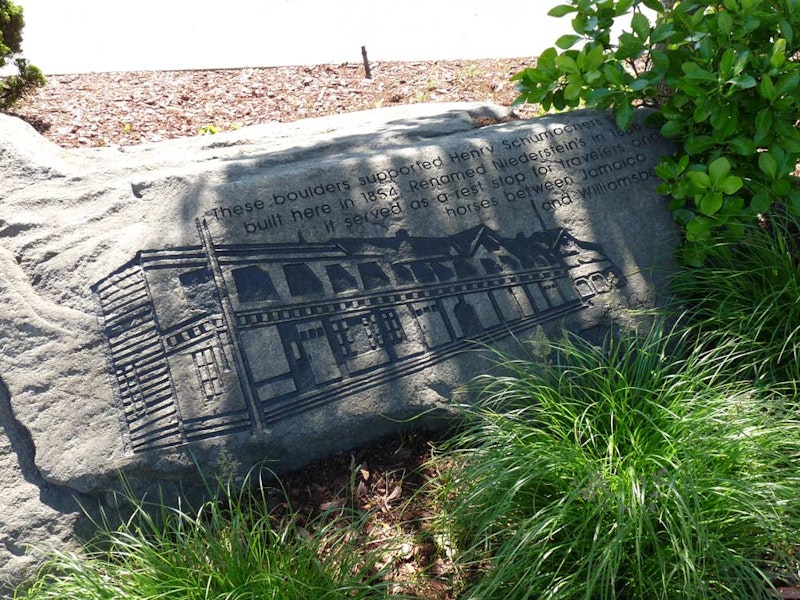 Metropolitan Ave. is one of the lengthiest routes between Brooklyn and Queens. It was first built in 1815, give or take a year, as a toll road and was known along much of its length as the Williamsburg and Jamaica Turnpike until the mid-1800s. It runs from the East River to Jamaica Ave. and along the way, marks the southern limit of Newtown Creek, and runs through Lutheran/All-Faiths and St. John’s Cemeteries, as well as Forest Park. It’s the spine of several communities—Williamsburg, Middle Village (named because it was midway between Williamsburg and Jamaica), and Kew Gardens, and forms the boundary line between Ridgewood and Maspeth. It’s about 13 miles in length. I’ll show you a couple of things from its stretch in Middle Village.

East of the last stop on the M train at All Faiths Cemetery and Christ the King High School is an Arby’s Roast Beef outlet. A roadside tavern called Niederstein’s occupied the Arby’s space for decades. A relic of the era when outings to cemeteries were the Sunday rage, Niederstein’s Restaurant stood on Metropolitan Ave. (formerly the Williamsburg and Jamaica Turnpike) from the early 1850s to 2005. 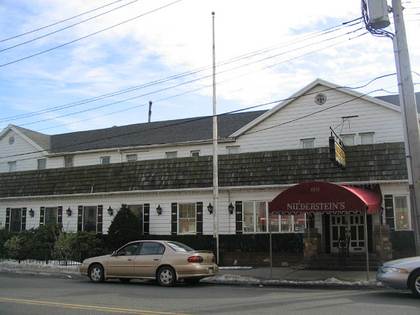 The roadhouse was constructed by Henry Schumacher in the early-1850s and was purchased by German immigrant John Niederstein in 1888. Niederstein, a cook by trade, made money operating the Yorkville Assembly Rooms on 2nd Ave. in that Manhattan German stronghold after his arrival in the 1860s.

Niederstein greatly expanded Schumacher’s roadhouse in response to the popularity of Sunday outings in the Queens cemetery belt, adding two wings on each side and eventually building 32 rooms. Besides cemetery outings, holidays became a great source of business, with Decoration (Memorial) Day the most popular one, followed by Mother’s Day and June 15th, which in the early-20th century celebrated as Slocum Memorial Day; the General Slocum steamship had burned in the East River on June 15th, 1904, killing over 1000 day trippers mostly from the Lower East Side and decimating what was then called Kleindeutschland—“Little Germany.”

During Niederstein’s peak it served dinner to over 130,000 patrons per year, which over the last 20 years of operation came to approximately 330,000 pounds of sauerbraten and 200,000 pounds of pork loin, according to The New York Times. Patronage steeply declined in the late-1990s and early-2000s and finally, ownership decided to close Niederstein’s and sell the property; an Arby’s franchisee purchased it for $1.6 million in late-2004. The restaurant closed in February 2005 and it was razed several weeks later.

Niederstein’s wasn’t the only German restaurant in Middle Village and Glendale to succumb: in the first two decades of the 20th Century, Van Westernhagen, Dubrow’s, and Chalet Alpina all closed, leaving Myrtle Ave.’s Zum Stammtisch the last knockwurst still standing. 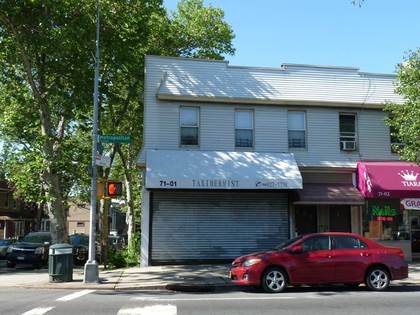 I was knocking around Cypress Hills a few months ago and noticed that the taxidermist at 964 Jamaica Ave., west of Grant, which had been marked by the sight of a stuffed fox and chickens in its transom window, was no longer there. A little research showed that the taxidermist shop was still alive and well, so to speak, and had moved here to Metropolitan Ave. and 71st St.

It turns out that John Youngaitis, NYC’s last taxidermist, put the joint up for sale in 2011, a pity since his shop was a sight to behold. Youngaitis is still in business at Cypress Hills Taxidermy Studio at 71-01 Metropolitan Ave. in Middle Village, where he moved in 2014.

Head east a couple of miles, through St. John’s Cemetery, the final resting place of John Gotti (Metropolitan Ave. has no sidewalks running through the cemetery, so you have to walk on a rocky path in the grass median) turn left at Alderton St., just past Woodhaven Blvd. In one block you come to a fork in the road where Trotting Course La., a leftover from Woodhaven Blvd.’s original path before it was widened and straightened. In the V of the fork you’ll find one of Queens’ smallest cemeteries, quite a change from the economy-sized Lutheran/All-Faiths and St. John’s Cemeteries we’ve previously seen on Metropolitan Ave.

Remsen Cemetery contains eight burials from 1790-1818. A historical plaque identifies Colonel Jeromus Remsen (1735-1790), who served in one of the major Revolutionary War chapters, the Battle of Long Island. Fortunately, in contrast to other small cemeteries around town, Remsen Cemetery is well-kept, the grass is mowed with regularity, and there’s even a remaining original historical marker from the 1930s. 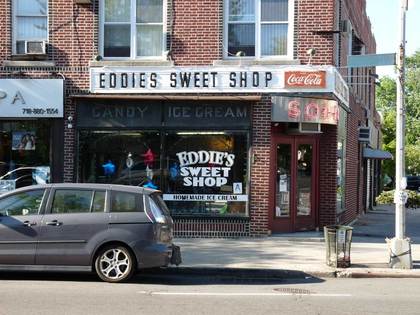 One Metropolitan Ave. eatery in no danger of closure is Eddie’s Sweet Shop at 72nd Rd. in Forest Hills. It has been in business since 1909 and has gone through four changes in ownership. A visit to the interior—wood tables with wrought-iron chairs, wood-paneled walls with ancient light fixtures, and menu of ice cream sundae dishes and fountain specials like banana splits with any topping imaginable (within reason), mit plenty of schlag (whipped cream)—no doubt provides the same experience as in 1995, 1965 or 1935.

A huge glass case beckons the kiddies with candy of all descriptions. Etched glass signs, a neon “soda” sign and a “privilege” sign provided by Coca-Cola contribute to three generations of store signage, if you enjoy noticing that sort of thing. I always order two scoops of vanilla, hot fudge and nuts because I’m a traditionalist when it comes to ice cream parlors. 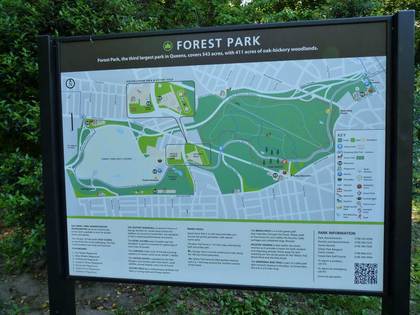 Forest Park is among NYC’s biggest parks, with over 500 acres stretching between the cemetery belt, Kew Gardens, Union Turnpike and Glendale and Park La. South in Woodhaven and Richmond Hill. It forms a natural boundary between communities in northern Queens (Glendale and Forest Hills) and their southern cousins. I haven’t extensively explored Forest Park as much as say, Central and Prospect Parks, and Forest Park makes no pretense of matching the cultural aspects of those two Olmsted and Vaux creations, though it has its moments.

Forest Park was actually created by the city of Brooklyn in 1895, with the city’s Parks Department buying up acres of forested property, hence the name. It’s among the more “natural” of our big parks, with about 165 acres left as woodland, interspersed with marked trails.

The park was surveyed by Frederick Law Olmsted, the co-developer of Central and Prospect Parks and much like the parks and natural reserves of Staten Island, Forest Park contains several nature trails ‘blazed’ or marked for the ease of hikers, and also boasts a bridle path.