Wikipedia Explains It All: Notes On The French Resistance

I began to wonder whether there wasn’t a bit of wishful thinking mixed in with the legend of those Resistance guerrillas. 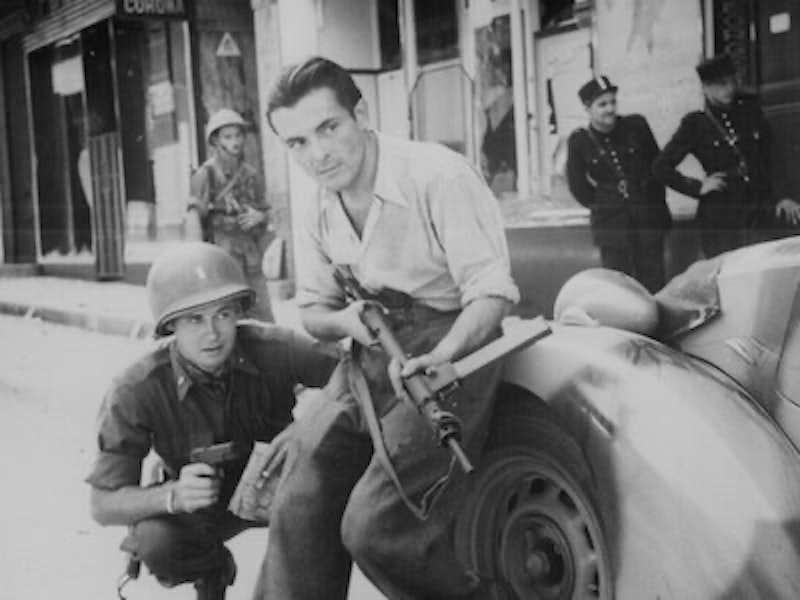 I grew up in a family of Communists, so all my life, I’ve heard about the French Resistance. Like the Lincoln Brigade, the protesters in Selma, and the Viet Cong, the French Resistance has a special place in our history. It’s a symbol of the incredible resilience and resourcefulness of the human spirit amidst besetting evils. I grew up believing that guerillas were the only unbeatable soldiers in the world. You didn’t mess with guerrillas; they had the element of surprise going for them. When I found out that the Seminoles had waged guerrilla warfare against the Spanish, I half expected our Everglades tour guide to say, “And that is why we proudly welcome you to the independent, indigenous nation of Florida.”

It made perfect sense to me that many of my favorite French writers had been members of the Resistance, including Albert Camus, Samuel “Irish” Beckett, and Andre Malraux. (For those of you who don’t believe Beckett is French, I refer you to En Attendant Godot, the original version of his play Waiting For Godot. Beckett wrote primarily in French; the rest of his novels and plays are in Greek.) I knew Malraux had to have been in the Resistance, since he was a man of action. In Malraux’s novel Man’s Fate, the characters all speak in pithy aphorisms about the importance of action, such as, “If a man is not ready to risk his life, where is his dignity?” To put this in context, the character in question is buying a croissant. So Malraux was a foregone conclusion. Camus, on the other hand, was pleasantly unexpected.

Then I made a terrible decision. I sat down and read Journey to the End of the Night, a novel by Louis-Ferdinand Céline. Céline is difficult to characterize: surreal, vituperative, and protean, he always remains a marginal figure, no matter what shape one might try to impose on French literature. This is perhaps why Céline is perhaps best known, even now, for being a writer who collaborated with the Nazis. My parents refused to read him, my friends had never heard of him, and my literature classes in college omitted him. The only people who seemed willing to bring him up were Jim Morrison (“End of the Night”) and Harold Bloom, who grudgingly included him in an appendix to The Western Canon. Meet Céline, everybody: the utility infielder of French letters.

Since I loved Céline’s novel, I got defensive about the whole French Resistance. Martin Heidegger had been an actual Nazi for many years, after all, but that hadn’t put him out of circulation. I’m not defending Céline’s cowardice, incidentally; about his life, the best one can say is that he failed to live up to ideals he didn’t possess. Nor am I making light of the risks that French Resistance fighters sometimes ran. But since every writer who fought for the Resistance seemed to have miraculously survived, I began to wonder whether there wasn’t at least a little bit of wishful thinking mixed in with the legend of those Resistance guerrillas. It was time to get the facts.

When I clicked Wikipedia, the site took me to an article that is, ostensibly, already complete. It’s nonetheless in dire need of annotations. So I’m proud to announce my newest publication, The Annotated “French Resistance.” I’ve included some excerpts (from the section “Activities”) below.

By June 1941, 81% of the miners of the national coal mining company, Charbonnages de France, were on strike, slowing deliveries of coal to German industrial plants supporting the war effort.

To be sure, this was fully a year after the Occupation. What the miners lacked in alacrity, however, they made up by being tenacious. When the Nazis re-occupied France in 1961, the miners went on strike again. Also they went on strike in 1962. And 1963. By the mid-1960s, Germany had entirely abandoned its plans to annex France, citing uncertainty about supplies of coal.

The first action of many Resistance movements was the publication and distribution of clandestine press material… Most clandestine newspapers were not consistent in their editorial stance.

For the two million French readers who subscribed to either print or digital versions of Resistance periodicals, this lack of editorial consistency was incredibly frustrating. After all, you didn’t have to be a German rocket scientist to grasp the basic topic and position of a good Resistance editorial. What was so hard about writing “FROM THE EDITOR: We Believe The Nazis Should Leave France”? Nobody knows, but apparently, that was just asking way too much. Instead, the Resistance journalists would go to rural areas and interview anyone wearing a “Make France Great Again” collaborator hat.

The decision to use friendly shops was a stroke of genius; it’s generally attributed to de Gaulle. Such shops charged very little, and were less likely to start firing at the writers. It was also a good idea to work at night, because nobody—not even you—could see what you were doing unless you turned on the lights. Sometimes this led to problems, such as the inclusion of a startling and irrelevant article on poodles, but usually it went okay.

If the Germans had noticed that the Resistance was using the official typeface of the Third Reich, they would’ve been furious, since this was occurring right after Joseph Goebbels began his famous “Arial for the Aryans” propaganda campaign.

The underground press brought out books as well… The 1942 novel Le Silence de la Mer, by Jean Bruller, quickly became a symbol of mental resistance through its story of how an old man and his niece refused to speak to the German officer occupying their house.

In fairness, though, many postmodern critics writing about Bruller have observed that neither the old man nor his niece realize the officer-in-residence is a Nazi. They are, in the words of one reviewer, “simply being French.”

The BCRA and the different British intelligence services often competed with one another to gather the most valuable information from their Resistance networks in France.

That is adorable. I bet they gave out monthly prizes. “We’ll beat those other Resistance chaps this month!” was a typical comment you might hear in a BCRA office.

The various Resistance movements in France had to understand the value of intelligence networks in order to be recognized or receive subsidies from the BCRA or the British.

The BCRA and British would generally administer short quizzes on this topic. A sample question:

Information from such services was often used as a bargaining chip to qualify for airdrops of weapons.

The Resistance was also able to qualify for these airdrops by selling 1000 magazine subscriptions or more.

Sabotage was a form of resistance adopted by groups who wanted to go beyond just distributing clandestine press publications.

This is why the BCRA offered French organizers both the “standard” Resistance package, which meant gathering intelligence and printing newsletters, and the “deluxe” version, which included a “sabotage of your choosing.”

In August 1941, the Parisian chemist France Bloch-Sérazin assembled a small laboratory in her apartment to provide explosives to communist Resistance fighters. The lab also produced cyanide capsules to allow the fighters to evade torture if arrested. Indeed, she herself was arrested in February 1942, tortured, and deported to Hamburg where she was beheaded by guillotine in February 1943.

So, I guess what we’re saying is, her cyanide capsules weren’t 100 percent effective.

Stealing dynamite from the Germans eventually took preference over handcrafting explosives. The British Special Operations Executive also parachuted tons of explosives to its agents in France for essential sabotage missions. The railways were a favorite target of saboteurs, who soon understood that removing bolts from the tracks was far more efficient than planting explosives.

Telegram from the Resistance: “HELLO BRITAIN /STOP/ THANKS FOR THE EXPLOSIVES /STOP/ PLEASE DON’T SEND ANY MORE /STOP/ WE’VE JUST FIGURED OUT HOW TRAINS WORK”

After the invasion of the Soviet Union in June 1941, communists engaged in guerrilla warfare, attacking German forces in French cities... The assassinations that took place during summer and autumn 1941, starting with Colonel Pierre-Georges Fabien's shooting of a German officer in the Paris Métro, caused fierce reprisals and executions of hundreds of French hostages. As a result, the clandestine press was very discreet about the events and the communists soon decided to discontinue the assassinations.

That’s the whole situation, right there, in a nutshell. But every cloud has a silver lining, and here that silver lining was the incredible tact and discretion shown by the men and women of the clandestine press. Headlines such as “Communists To Adopt Different Strategy; 300 Dead In Unrelated Reprisal” were the order of the day.

Well, that about does it for our story, which has been written entirely in the same typeface as officially sanctioned documents. As for the Resistance, for everything to be consummated—for me to feel less alone—I have only to wish that there be a large crowd of Wikipedia contributors, on the day of this document’s publication, and that they greet me with cries of hate.