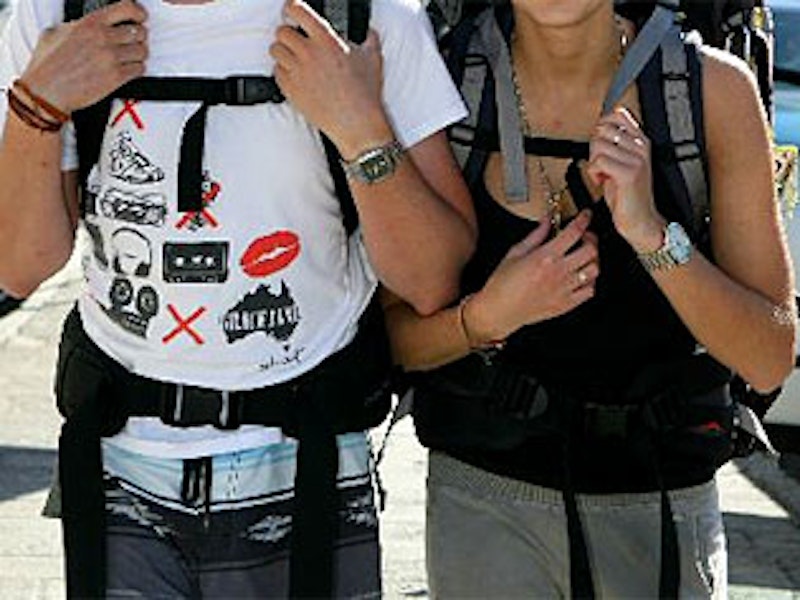 If you're an American backpacker, you have to deal with embarrassment and plenty of it. “No, no,” you feel like saying to Canadians and Brits and Germans. “I recognize that other nations have cultures of their own and their own languages, as opposed to English played at a louder volume. I recognize that we are here to learn, not to carry our ignorance about. I recognize—” And so on. But it's tough to get the message out. Reality keeps getting in the way.

Example. I'm in Oaxaca, which is a decent-size city in Mexico. I'm talking to a nice, lively woman in her 60s, a spry character who smiles at the local inhabitants and bubbles about the lovely vistas. Where is she going next? She plans to follow her nose, like a good traveler. On the bus to Oaxaca she saw signs along the highway. “Staw Maria,” they said. She's curious. She'd like to see “Staw Maria.” As in “Sta” Maria, an abbreviation for Santa Maria.

Hey, wait a second. Staying at my modest albergo in Oaxaca, I find that I'm neighbors with a young couple. He's short, square-built and rosy-faced. She's slender and long-legged, with a fine profile. As far as I can tell they have about half a brain between them. All they talk about is bars, dope, beaches, drinks, other bars, clubs, beaches in Thailand, more drinks and Kate Moss. (One day, a little before noon, I hear the girl out on the landing. “And Kate Moss was there,” she says. She's telling the boy about her dream from the night before.)

One time I bump into the boy outside our little hotel. “Do you know where Georgie is?” he says. But who is Georgie? Another guest? A friend of theirs? The boy shakes his head. He's too good-natured to be impatient, but you can see that getting my brain going strikes him as a tough job of work. “Georgie,” he says. “This hotel. He owns this hotel here.”

“Oh!” I say. “Jorge.” He stares at me. I realize I should have kept my mouth shut. But yeah, he means Jorge, just like it says on the sign naming our friendly proprietor. All this time he and his leggy girlfriend have been addressing this man, who is more than twice their age, as Georgie. The man hasn't said a word about it. The long-suffering people of Mexico have learned to put up with the casually indifferent behavior of their northern… all right, the kids were English, not American. Maybe the mention of Kate Moss tipped you off.

You can see where this is going. I stay at a youth hostel in San Miguel de Allende. The person in charge is a loud, swooping woman named Esther. She can't walk into a room without making noise. She proclaims her opinions and makes a great show of her dynamism. Elbows out, she strides here and there, picking things up and putting them down.

Her assistant is a Mexican named Carlos, a slim man who is indeed long-suffering. “You are making absolutely no sense,” she barks at him. “I think your English is getting worse.” His English is actually pretty good. Her Spanish is nonexistent. Two years in Mexico and she hasn't learned any.

Yes, Esther is from England. Perhaps you have imagined her beak nose and knobby elbows. If so, your imagination knows the score. She has the English tendency to confuse noise with energy, energy with spirit, and spirit with character. She has the inverted puritanism of her kind, so that she stands outdoors and throws cherry bombs like an idiot because that's what the Mexicans do and they're so free, not like those constipated fools back home, or the Americans and their… Oh, dear.

There was also the Dutch couple who arrived in a Guatemalan mountain town and wanted to know where the hot showers were and why the local restaurant didn't do takeout. The Quebecois boy who explored Greece and came away bubbling about the youth hostel's jukebox and how it had all the tracks by the Doors. The German girl who delivered a lecture about using only local transportation, not knowing that people in the Turkish mountains hire one of the local beat-up cars when they have to get somewhere.

I'm not saying that Americans, by and large, are so much better than the goofballs described above. But they haven't been worse, and all the outstanding examples of goofballism, as encountered by me, have been European or Canadian. In the usual way of humans, they stick their shortcomings onto someone else—in this case that most First World of groups, Americans. That's because travel makes people broadminded.

So what we have learned? First, that I'm irritable. Second, a lot of backpackers are really just assholes.