A Few Rules For My Funeral 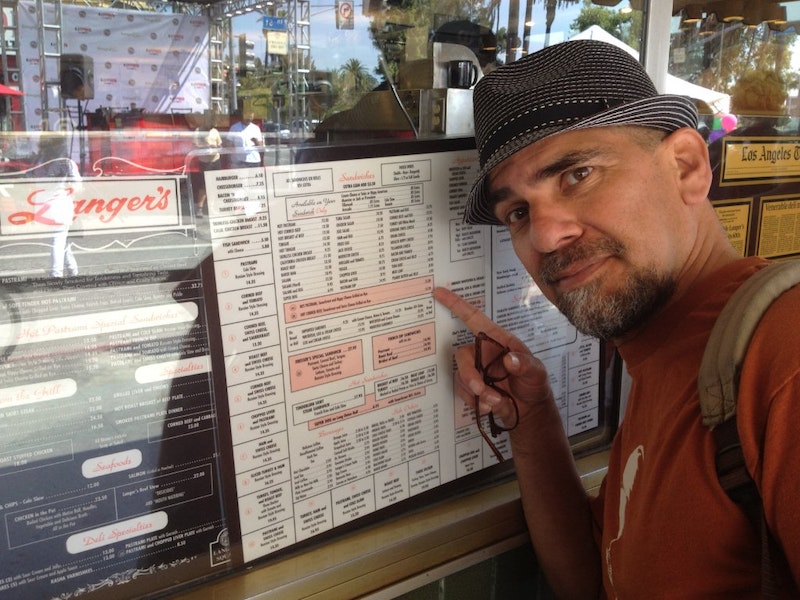 When I’m dead, please, promise me that my brother Jaime does not sing at my funeral. Please swear to me, that you will not let him do that thing, that warbling, vibrating thing. Please, don’t let him do that.

I love my brother like a brother but that I can’t stand. I’m serious. This is my big exit and I don’t want it spoiled. Okay?

Look, I’m not morbid, and I hope I live a long life, but that hasn’t stopped me from planning my funeral. You see, I’ve had many near death experiences. I’ve been nearly drowned, shot, electrocuted, incinerated, crushed and choked.

I was around 10 the first time I almost died and it was a bratwurst that nearly did me in. I’d been wolfing down a giant brat dog when my aunt Lucille yelled, hurry up.

We’d been fishing and she had a couple gunnysacks of bonito she needed to get home. There was enough for two normal bites, but because she rushed me and because I’m a pig I put the whole thing in my mouth and swallowed. It got stuck in my throat and nobody knew about Heimlich back then.

Somehow I managed to hack the thing up, but got no sympathy from my aunt other than a rag with fish scales all over it to wipe my mouth. Then there was the time in the Mojave Desert with the Boy Scouts shooting rifles, 22’s and Army issue M1’s. My next-door neighbor Freddy aimed in my direction and pulled the trigger. The bullet came so close that I could feel it graze my scalp.

Another time I even saw the white light thing after I grabbed onto a power line coming from a telephone pole in Ensenada. Stupid me for believing some Boy Scouts from troop 300, when they told me that it wouldn’t hurt. The lesson here is don’t trust Boy Scouts, the rat fuckers. The Scouts motto is “Be prepared!” Be prepared to die is more like it.

Let me see, on two different occasions I flipped cars on highways with them landing upside down. I once woke up with my mummy bag in flames. That was in Alaska and a lot of alcohol was involved. That one hurt. Then there was that other time in Alaska that I fell into a freezing bay in a pitch-black night and a strong tide was dragging me out to sea.

See, the thing about my funeral is that I don’t want it left to chance. I want it to be fun and cool. When Belushi died, he and Aykroyd had worked out an agreement that the “flight of the bumble bee” had to be played at their funerals. You know, an homage to the killer bees sketch from their days at Saturday Night Live. A nice touch I thought.

And then there are traditions, like bagpipes or taps that are often played. When a famous actor from the theater dies the lights on Broadway are dimmed. I’ve heard that when a jockey dies, they have a boots put backwards in the stirrups of a riderless horse and then someone leads it around the track. There’s the 21 gun salute, flags at half mast, when somebody dies in the world of boxing they strike a bell 10 times, and the Air Force with four jets flying in formation before one jet veers off solo. How about when John Lennon died? There was a minute of silence on the radio.

But what have I done with my life? I’m a goddamned telephone solicitor. How would I be eulogized? What would be said, other than something trite and corny that you might see on a bumper sticker like, “Salesmen don’t die, they just go out of commission.”
And then, what?

The bane of the telephone solicitor, a dial tone after the dreaded hang-up!

So, this is what I decided: first I want Irish keeners, two of them. Professional wailers, the kind that will carry on like they’ve just lost their only kids. And I want Van Morrison singing something, but I haven’t decided on the set yet, although something from Astral Weeks would be good. And I want a pregnant woman to jump on my casket screaming, “No daddy no!” And I want a couple of really hot babes, breaking out in a nasty catfight and tearing each others’ clothes off. And I want four jackasses running in a mini-herd and then one galloping off alone. And a New Orleans funeral jazz band playing the slow dirge for the procession and then kicking off into some wild party riff that will compel everyone to dance.

And Langers will cater, serving the worlds best pastrami sandwiches. The overall combination of crispy, tender, chewy, peppery, smoky and tangy is a thing of beauty. These are so good that after just one bite from this amazing meal of a sandwich all resentments towards me will vanish instantly and everyone will think the thought that undoubtedly someone will be heard saying, “Y’know, this pastrami is so good, you kinda wish he could die every day.”

And I want piñata’s made in my likeness. Piñatas with my body and face that will get swung at and smashed open with corked bats and the contents will be pounced on; little bottles of booze and expensive chocolate bars and non-filter cigarettes and real good pens and movie passes and one ounce plata pura Mexican silver coins and Dodger dogs all fought over as they come spilling out.

Finally, I want to be cremated, and I want my ashes thrown into the faces of people that have pissed me off. I’ll make a list, don’t worry, I’ll make a list of the people you can count on that. I just don’t think there’ll be enough of me for them all.

Conrad Romo is a partner at the indie press Writ Large and hosts one of L.A.'s best literary reading events, Tongue & Groove.