The Girl in the Gay T-Shirt

An encounter with a White Girl in Charge of Tolerance. 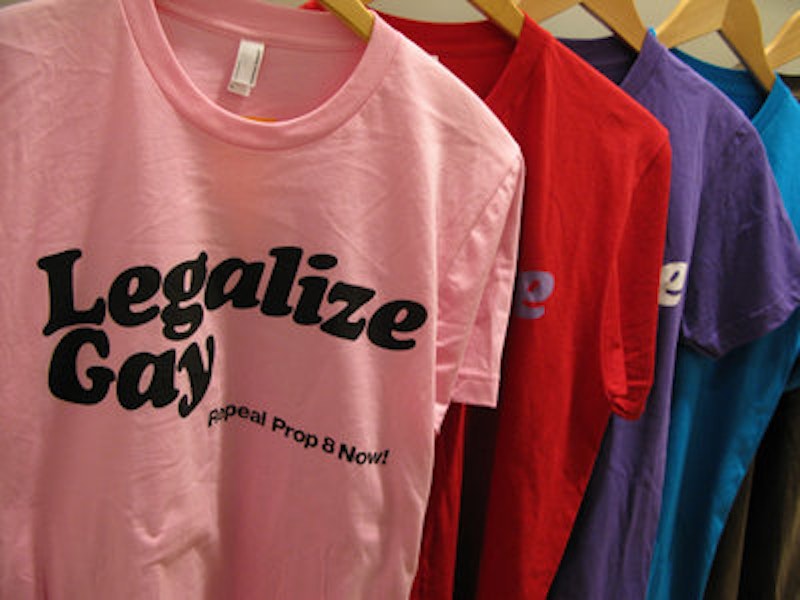 One Saturday morning I found myself faced with an odd mission. I had to go to a clothing store and return merchandise. It was odd because I buy my clothes second-hand and wear them until they're rags. I try to avoid spending money on clothes and I hate paperwork and sticky bureaucratic procedure—for example holding on to receipts and then presenting them to a cashier and hoping that the returned items will pass muster with the cashier's eagle eye. I like life to be simple, very simple.

But in this case another party had intervened. My yoga teacher (as he then was) had insisted that my standard yoga wear of sweatpants and a heavy t-shirt could no longer be tolerated. His rationale was that he had to see my body at work so he could properly judge my progress. On the one hand, I recognized that there were men in the class who routinely took their shirts off for practice. On the other hand, I didn't want to. Furthermore, my teacher expressed all too great an interest in my body. He had done this by means of jokes and gestures that I routinely brushed off.

In his way he was a very good teacher, at least at that time, and he also suffered from a severe case of flapmouth. The combination made it easy to discount his sex jabber. But now he was pushing things. When I refused to take off my shirt for class, we bargained a bit and arrived at this: he would pick out a shirt that would allow him (as he saw it) to do his work properly. If I liked the shirt, I would pay him back.

The result was that, in class on Friday, he presented me with a mesh t-shirt and insisted that I put it on. I insisted back, successfully, that I would give the shirt a try when I was alone at home. During this exchange he got down on one knee and told me, in so many words, “But I will be your father!” Yes, he would say crazy things like that. God knows how he reached this particular bit of craziness when our starting point was a t-shirt. But he managed. My answer was an eye roll and a straightforward “Yeah right, you're my daddy,” and that ended matters for the time being. I'd try the t-shirt on at home.

On Saturday morning, looking in the mirror, I realized something horrible. Not only was this a mesh t-shirt, it was also a size too small. At least. Let me note here that my teacher considered himself a man of remarkable gifts, including an infallible eye. But my teacher's infallible eye had failed, and as a result I could see flesh and body hair push through my clothing's weave like a horrible kind of cheese. I decided right then that something had to be done. I would march to American Apparel and give the clothing back before my teacher had a chance to protest.

I had the receipt because my teacher wanted to be paid back. What else was involved? I figured I should call up and make sure, since the outlet in question was a 30 minutes' walk away. So I picked up the phone and soon enough I was listening to a young girl's voice competing with background noise. The background noise was the sort of music played in young-people shopping outlets to get the customers revved up. Thump, thump, thump. And the girl's voice wasn't competing too hard. Either she took noise like that for granted or she didn't think she should have to talk to a stranger on a phone. Or both, of course.

I wanted to return something. Did I just show up with item and receipt? “Well, yeah.” And I got my money back? Pause. “No.” She explained that I had to exchange the item. Was it damaged? No, not damaged. Somebody else bought it for me by and I didn't like it. She said something or other. “Can you turn down the music?” I asked. “What?” “Can you turn down the music?” Another pause. “No.”

“A card,” she said, rather impatiently. “You get a card and you can use it to buy something.”

Which left me where I had started, except at least I didn't have to pick anything out that morning. I could wait until I felt the need for some item of clothing, and then I could go to American Apparel and spend my $32.50 by means of the card. “Can I use the card and some money to buy something that's worth more than $32.50?” I asked. This seemed to overwhelm her circuits, but at last my meaning penetrated and she answered with a flat and weary “Yes.” And the line went dead.

I arrived at the store. The wide floors outside the American Apparel were empty; apparently nobody goes to malls before noon on a Saturday. Inside the store I found racks of clothing hanging mute beneath the same thump-thump-thump I had heard over the phone. A high counter and almost equally tall cash register stood near the store's entrance. Behind the counter was a small, very pretty blonde girl. I said I had come to return a shirt.

“Oh,” she said. “You.” I handed over the shirt and receipt, and she went to work. This involved, as I remember it, moving around other slips of paper. She did the job with a dent notched at either corner of her mouth, but even so she worked with speed, not lackadaisically. My read on her was the following: She was the sort of pretty mesomorph girl who thinks she is especially capable just because she bothers to take her work somewhat seriously.

One thing was odd about her. She wore a lavender tent that bore the words “Legalize Gay” and, in smaller letters, “Repeal Prop 8 Now!” The words were in a dreadful, fat-tired, funky typeface that made me think of the 1970s. I could not imagine anybody wearing the thing, but here somebody was and she was swathed in it. The shirt she had on had been sized for an XL man with a beer belly.

“Are you from California?” I asked. “No,” she said. “Vancouver.” Then came a small surprise. Pretty mesomorph girls who are convinced they are efficient are also convinced that male customers want to vault the counter and grab them. They give nothing in the way of friendliness. But maybe she noticed that I kept my distance and had my gaze parked indifferently off to her side. At any rate, she added, “Why?”

She puzzled over this, then got it: Proposition 8. At that moment her mood softened. Proposition 8 is a California ballot initiative that made gay marriage illegal. The girl figured that anybody who knew about it had to be gay. I was gay, so she approved of me. “Where are you from?” she asked. Compared with a few moments before, she was radiating friendliness.

I told her I was from New York, which was true. Being the sort who jumps to conclusions, she decided this meant I lived in New York. No doubt I was visiting Canada for a quick weekend of fiddling with receipts and returning bought goods.

“You have to see the Village,” she said, the Village being the gay section of my adopted city. “You just go onto St. Catherine St. and walk east and…” You might wonder why she thought a gay man visiting a major city would have no idea where its world-renowned gay neighborhood was. But she was a White Girl in Charge of Tolerance. They love to give directions.

By now my transaction was done. I had my card and was ready to go. But the girl wanted to make a last gesture. “Hey,” she said, “Do you want one of the shirts? We've got a box of them.” She meant one of the “Legalize Gay” shirts. A box of them sat against the wall.

I considered. “Well,” I said, “how does it look?” She hesitated, not knowing what I meant. So I said, “Do you mind…?” And I gestured, a little gesture with both hands: thumb pressing forefinger, each hand gliding out to the side by an inch or two. It was the sort of gesture you'd make if you wanted someone to gently pull shut something closed with purse strings. “Because it hangs,” I said. “You know.”

“Oh!” she said. I wanted her to pull the shirt tighter so I could size up its effect. “Yes,” she said. “Sure.” After some fiddling she had it molded more or less tightly against her frame. She had small breasts, as you might expect, but they were nicely round.

I tilted my head and looked, and at this point she blushed. “All right,” I said. “Sure.” And after a moment I added, “Thanks.”

Before I left, she remembered a last bit of information. “And it's Pride Weekend!” she said. “Great,” I told her. “Everyone can high-five me.” Back home I went down to the basement. My building's handyman, who's a drunken fool and lives like a pig, was asleep in his bed. He never locks his door, since he figures nothing he has is worth stealing.

The handyman keeps his clothing on the floor: smelly jeans here, smelly t-shirts there. I lifted a handful of the shirts and dropped my addition into the middle of the pile.

Since then it's been more than a year. I fired my troublesome yoga teacher a few months after the t-shirt episode. I'm still waiting to think of something I want to buy at American Apparel. And the drunken handyman never unearthed my present to him—I asked and he had no idea what I was talking about. But all in all, I remember that Saturday with great satisfaction.