On a few warning signs that it’s time to cut your losses and firmly, finally abandon what was a serious friendship. 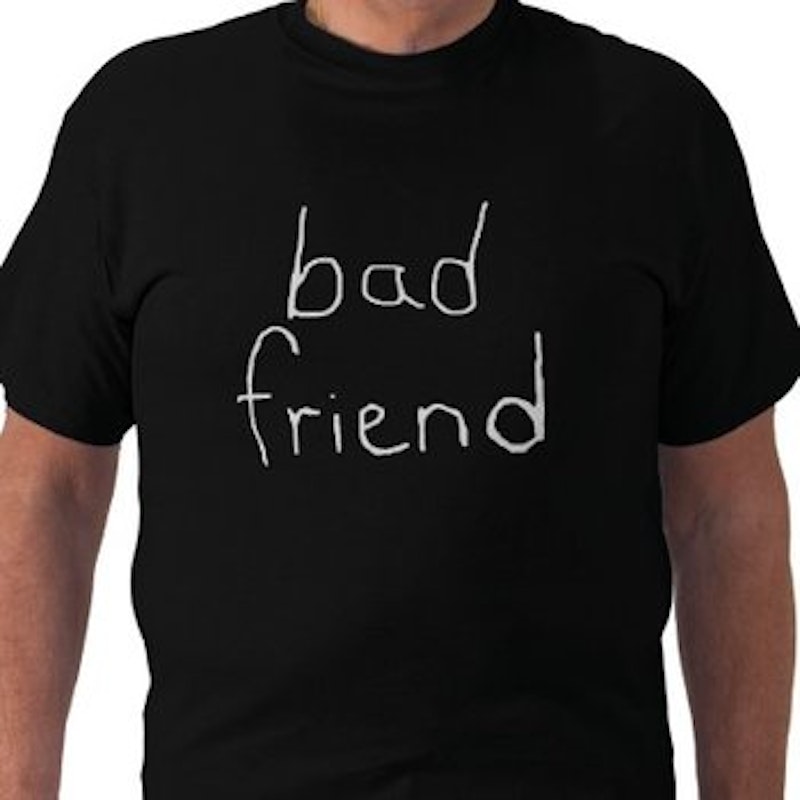 When you immediately assumed that I was taking the opposing side in an online, hopelessly internecine squabble that got pretty personal, and then you started yelling at me on the telephone, and you subsequently assumed a pose of emotional remoteness vis-à-vis our once-brotherly bonhomie.

When your good-natured spouse friended me on Facebook in an attempt to extend an olive branch of sorts in recompense for you ultimately revealing yourself as a deadbeat friend, not just to me, but to pretty much everyone who trusted you and respected you and broke bread with you after you graduated from high school.

When I’m rooting through old compact discs looking for stuff to sell, and I realize that every album that reminds me of you makes me feel nauseous.

When you became more interested in my friends than you were in me, even though you knew me first and best.

When I told you, via email, I was involuntarily jobless and you made some comment about me being an economic statistic.

When you got married and ditched all of your old friends, including me.

When you returned all my shit when I wasn’t around, so you wouldn’t have to confront me.

When I have no idea how to find you and realize that the likelihood of you trying to track me down is slim to none, and slim just left town.

When my spouse asks me if I want to send you a Christmas card, and I say “No way” for the fifth or sixth Christmas in a row.

When you went on about how I used to be your best friend, immediately before going on about your new best friend.

When you stood me up and laughed when I protested it later, offering no apologies.

When you stood me up again and expected me to acquiesce.

When suddenly talking to you was like conversing with a robot.

When you stopped returning my telephone calls.

When you stopped replying to my email messages.

When you betrayed me for sport.

When the email responses you do bother to send are single-word pop-culture catchphrases of the moment.

When you acted like you were too cool to know me anymore.

When you just went ghost.

When you made a habit of going ghost for long stretches of time, even though you knew I worried.

When your train of thought in conversation with me keeps skipping like a fuzzy needle on a turntable, as though you were trying and failing to play a part convincingly.

When nothing you say is heartfelt: when it’s clear that I might as well be a stranger at the bus stop.

When it was clear that I was a stepping-stone to someone else, or, worse, one of a series of people that you were using in the same way, methodically, one at a time.

When you allowed me to believe that I was your confidante in relation to people we both knew who you believed were trifling and possibly demented, who you were above, and I allowed myself to believe that you weren’t slagging me with those people, and that ultimately you’d tire of all of us, en masse, and ascend to another, rarified social circle.

When I defended you to many and you proved by action that I was drunk on the Kool-Aid.

When you moved away, or I moved away, and then suddenly it was as though the sustained miracle of our connection—that almost intimate psychic knowing—was temporary, a joke, because in the absence of physical proximity all was lost, was a sham, was pure vapor.

When it became painfully apparent that losing me as a friend—me vanishing or dying or whatever—would not affect your life in an meaningful, significant way.

When, unbeknownst to anyone, you pivoted, did an about-face, ceased to be you.