Why Do We Talk?

As against Richard Rorty, I'm holding out for a distinction between truth-telling and messaging. 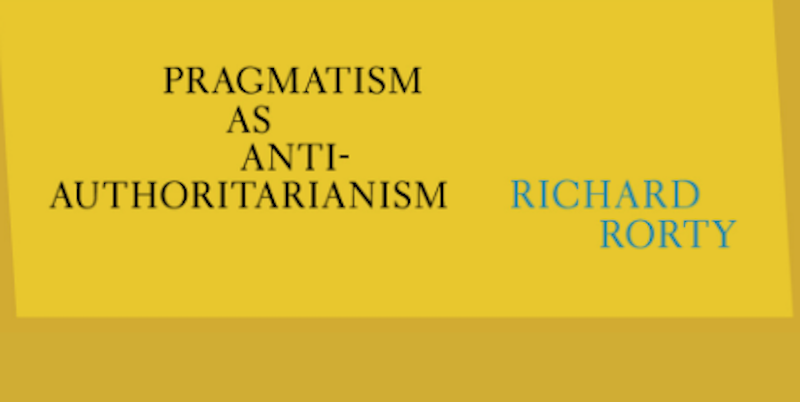 Richard Rorty, one of the most eminent and provocative philosophers of his period, died in 2007, but his "last" book was just published. Pragmatism as Anti-Authoritarianism was reworked into a book by Rorty after a 1996 lecture series he delivered in Spain, and was published in Catalan and Spanish translations, but not English until last month. It’s a clear a statement of his philosophy. For academic theory, it’s amazingly well- and clearly-written. It's also wrong about many things. Let's take one: the nature and purpose of human communication.

Since his magnum opus Philosophy and the Mirror of Nature (1979), Rorty could state his most basic point along these lines: the Western philosophical tradition often conceives truth as a language that reflects, accurately pictures, or mirrors reality. This, Rorty argues, is simplistic and false. In dismantling truth as a mirror of nature, Rorty conjures a crew of torpedoes: Hegel, Dewey, Heidegger, Wittgenstein, Derrida, and Quine, among others. What and how words mean, these figures more or less argue (at least according to Rorty), is a nexus of social conventions. We can only construe a world through the cultural categories that we’ve inherited.

Whether anything in Reality corresponds to what we call “redness,” for example, can’t be known until we can exit our own categories and experience colors from a God's-eye point of view. Our way of sorting colors is essential to our experience of them. But another culture and language might have a completely different system. The test for which of these systems is better or which is true can’t be that one matches reality and one doesn't: we can't compare the real color outside all color categories to the color we experience, in order to see whether they match up. We only have our own descriptions.

Truth, then, is a social matter. From this, and a further series of moves, Rorty concludes that truth is a pragmatic category, a matter of the social effects of a belief or theory. We shouldn't ask whether a particular belief mirrors the way things really are but whether it makes our lives together better. He wants to construe "the pursuit of truth as the pursuit of human happiness." We're not going to find out what to believe from God or from Reality Itself. This series of thoughts, he writes, "requires us to set aside anyauthority save that of a consensus of our fellow human beings." We can no longer separate saying the truth from having a good social effect. Beliefs, he says, "are merely tools to increase our chances at happiness."

Rorty views this as a kind of liberation: it's only us down here, muddling through. Now we need to ask which of our beliefs will be useful in creating human happiness. We can call those “true,” and we can try to inculcate them in others. We have to think about what it would help us to believe together. If you're a politician, for example, your task isn’t to say what matches up to the way the world is, but what would help us reduce cruelty and increase justice.

That's a fairly long summary of a much more elaborate series of arguments. But the point I want to emphasize is that, in losing the more-then-social world, Rorty's account loses something that’s central to decent human communication. He loses an essential set of distinctions that, I hope, we still all use intuitively. And in the process, he makes of human communication a wretched and degraded thing.

I’d better not confuse what’s true with what it makes me happy to believe, as Rorty repeatedly suggests. Perhaps if I believed that I was about as good, smart, and beautiful as possible, I’d be happier, or at least I would’ve cured my self-loathing. But believing it, and it making me happy to believe it, has no tendency whatever to make it true. If I believe such things about myself, I'm a pretty insufferable egomaniac who believes self-serving jive.

Certainly, that is, the test of truth, the test of whether I ought to believe something, can’t be that it makes me happy to believe it. Rorty's considered position, though, is that we ought to believe what would make all of us happy together, what would enable us to change our collective situation for the better. Political communication, like all communication finally, has practical purposes. As I communicate, I should think about what, if we believed it together, would make us happier. The test of an assertion or flow of rhetoric is how it might transform my hearers to take on practical barriers; that's what it means to say it's true.

I think this is an unfortunate view of communication. It erases the difference between trying to be honest and emitting a flow of propaganda. It erases the difference between trying to say what you really believe and trying to manipulate your audience into believing, doing, or being something other than they are. It makes persuasion a test for truth. But I think we all recognize that persuasive tactics can be misleading. This seems obvious when they lead to disaster: when the conspiracy theories collapse the Capitol, for example. If so, persuasive talk can also be misleading when it has good effects. I'm afraid the position amounts to this: the propaganda for our side is true; the propaganda for your side is false. Well, that is in itself propaganda. Or it would be, if there was any such thing on Rorty's view.

This led him to argue eventually, for example, that universities are morally obligated to train students in progressive beliefs, and to eliminate expressions and people from campus who compromise this task. It's often said that Rorty was "prescient"; he expected the rise of a Trump, for example (lots of people did, though). Well, he was definitely prescient about what college campuses would be like in 2021.

"A true man," said King Ethelred the Unready in about 1000 AD, "does not think about what his hearers are feeling, but what he is saying." Despite what many contemporary theories of communication assert, if I’m trying primarily to have certain cognitive effects on the people listening to me, beyond having them clearly understand what I believe, I’m beckoning myself to take leave of the truth as I understand it. I’m betraying my own experience, and spiraling into a bottomless dishonesty, a dishonesty that doesn’t recognize any distinction between honesty and dishonesty and is hence incurable.

If I want to engage in decent communication, if I want to respect the people I’m communicating with, and if I want to be a decent human being, I’d better ask questions like this before I say: "Do I really believe what I am about to say?" "Am I expressing it as clearly and directly as I can, so that other people can understand me?" If you're reformulating your beliefs and experiences in a way intended to intimidate or flummox people, appealing to authority or throwing in some fashionable jargon because it might make what you’re saying seem more credible, or considering the most attractive frame, you’re not communicating at all, just using people.

Rorty's views about meaning, truth, and communication are direct prefigurations of the entire replacement of communication with messaging characteristic of our moment. But we’d better hold on to a distinction between trying to share ourselves honestly and trying to fool, bewilder or message one another into doing what we want one another to do, from the endless back-and-forth of bullshit. I think of the 2020s as the epoch of messaging, in which everyone takes it for granted that we're manipulating each other all the time and that there's no alternative because there’s no world, no reality, no sincere belief system, against which any utterance could be tested.