Clowning Around the TV

I never warmed up to ideas considered acceptable moral behavior. 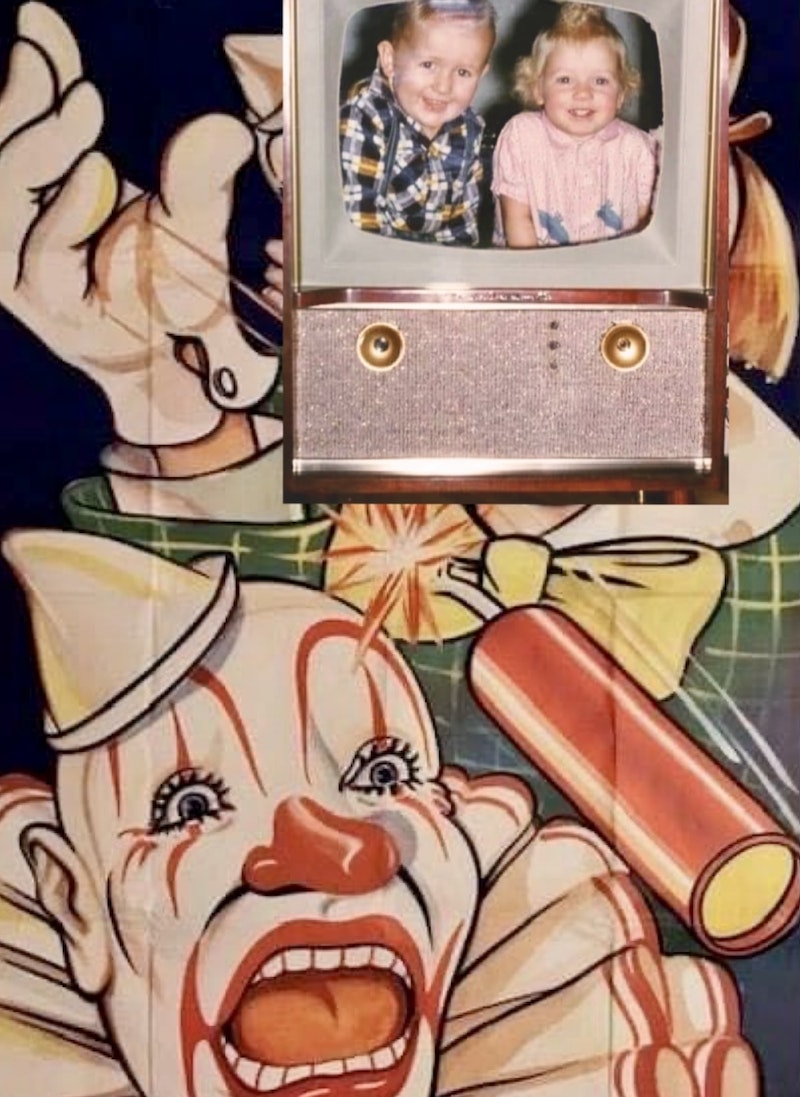 I'm uncertain of the title for that old TV show we watched as little kids. It was either Big Top, Circus World, or Circus Time. In the late-1950s, one of my first vivid childhood recollections. Prerecorded calliope music played in the background as a giant white bald head slowly rose. Lifting to reveal a laughing clown's face on the small TV screen. His painted lips and big mouth opened wide to reveal a laughing clown. It was hysterical, an insane cackle. Every time we watched this show, my brother burst into tears from fear. But it was the opposite reaction for me. This crazy and jolly clown was a strange delight.

I'll always love clowns. Too many young and old people fear clowns, thinking them creepy, sinister and pure evil. It's a valid phobia being afraid of people different from us. But it's an irrational notion perceived by what's considered normal. The bizarre, unusual, and sometimes morbid displays that play out in real life are comforting to me. I become one with the shady side. That dark place where shadows dance and sing twisted songs. Having a warped sense of humor helps soothe the irony of imaginary terrors. In the late-1960s, I began calling myself a freak. In contrast, most kids tried to fit right into rigid, regimental settings while going to public schools and churches. As a result, both equally weird, awkward social and sexual behavior were causes of much youthful social anxiety.

I never warmed up to ideas considered acceptable moral behavior. These knee-jerk impulses create outcasts, and I was as aloof and antisocial as any kid. Detached from reality, I invented my own. I thought I was different from the ordinary, rejecting the uniformity of sheepish classmates who never questioned the rules and regulations. The crap that the majority of law-abiding citizens abide. I never wanted to follow the leader.

But I discovered it's the same with everybody, there's no alternative. We want acceptance yet shy away from it. Always against the grain of pretentious, self-respecting examples of what not to become. Told how to act, speak, do, or mimic—cheap imitators of the real deal. The concept of clowns is a cut above average humans who follow the next butt in front of them to sniff. Feelings of inferiority are always present.

Like most kids of my generation, I found refuge watching television. It was my great escape, a sanctuary hidden away from the mundane world of conformity that swallows it all. Social interaction today is the result of social media. It's the only game in town, and everyone's a player. The miracle of television helped shape my ideas of the world and everyone in it. On the surface, things appear ordinary, but my nature sought solace in the televised fortress of solitude. No peering eyes peeping snap judgments. My parents, teachers, and all the rest had nothing on me. All my friends were freaks too. We shared a pact of singularity by rejecting the status quo and making our own pact with the world at large.

I chose make-believe families and friends to keep me company, surrounded by the warm glow of a magic vacuum tube. I fantasized about Lily Munster and Morticia Addams as my surrogate mothers and was part of their dysfunctional families. I had big crushes on Elly May from The Beverly Hillbillies with all her critters by the cement pond, Ginger and Mary Ann from Gilligan’s Island, hot lesbo action, and even incestuous scenarios with Lily and Morticia. But Beaver’s Mom left me cold. Beav's dad was a clueless simpering wimpy windbag of nickel-and-dime wisdom. Beaver’s big brother Wally was the cool guy. However, still, a nerdy jock, a shy boy in touch with his feminine side, and his best buddy Eddie Haskell was a two-faced sniveling ass kisser. But you could learn much from these 2-D characters acting out real-life dramas in the living room. So much can be learned from Bugs Bunny, Donald Duck, and Porky Pig on a Saturday morning. Don't even get me started on the years I whittled away in Mayberry RFD. Hanging out with Goober and Gomer. Avoiding Deputy Barney Fife and Sheriff Andy Taylor. Getting drunk with Otis and gorging on Aunt Bea's homemade apple pie. Getting a haircut at Floyd’s Barbershop while shooting the breeze with Emmett from the Fixit Shop. That down-home cracker barrel, Southern charm, peckerwood stuff was just a short way down the road from the KKK.

It helped shape my skewered view on the overwhelming idiotic pretense of what's considered proper behavior. The everyday preoccupation with normality and its relentless pseudo-realism is what I detest, never settling for mere average drivel. Everything made me question the hidden meanings. It made for a very uncomfortable existence.

This way of life in the modern, high-tech, not-so-good land of the free won't suit your needs or save your soul. Work hard and eventually die, never truly enjoying the gifts life offers. Too busy chasing dollars and demons. There's no room in the theater of popular opinion for freedom of thought. The vast majority are stuck in time’s clock illusion. Going round and round again, going nowhere fast. Suspicious of everything that doesn't meet their standards of fear. Talk about ghosts in the machine. Geesh!

Why are we afraid to see the other side of anything deemed unacceptable? Free time and easy living don't mix well in the work-a-day 9-5 con job rat race. You're lazy, a shiftless, good-for-nothing bum who scorns tradition if you don't obey the rules. Phooey. Television serves its purpose, preparing the past for the future today. They're interchangeable in the electronic fog machine. They're blowing high-tech smoke up your ass to sell stuff and make a believer out of you for things you never needed. Simulation manufactured to make time stand still, to be a tube, an unwitting shill. Be a clown, a zany freak. Don't buy into that, you sideshow geek. Become the jester of your kingdom. Step right up! Be a clown.