One of 11, but I was the one who got to wake Clint Eastwood up from his nap. 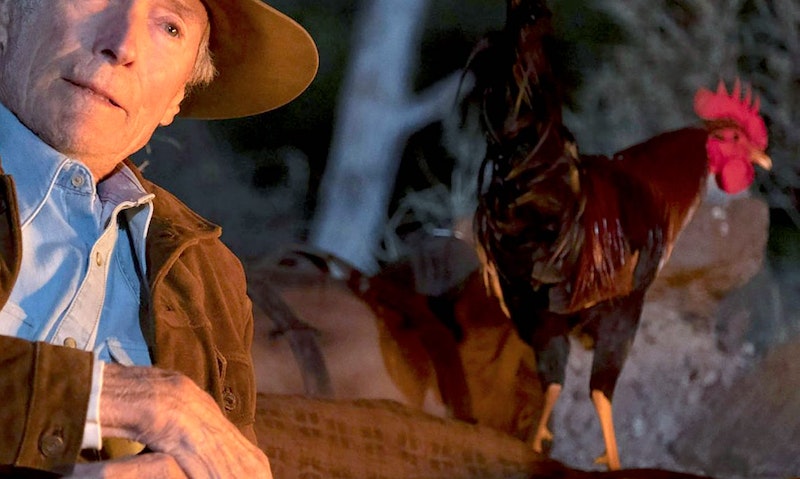 Clint Eastwood and the author, in wardrobe.

I am Macho. That’s not to say that I’m tough, or especially bold or physically aggressive. I’m all of those things, but that’s not what I’m talking about. I am Macho, the second lead in the new Clint Eastwood film Cry Macho, alongside Mexican soap opera star Eduardo Minett and Eastwood himself. My “friend” (vampire) Nicky Smith wrote a “nice review” of the film on Wednesday for Splice Today. I don’t doubt his sincerity but I doubt his motives. What was he doing alone in a movie theater on a Sunday night? And cavorting with an employee no less? Did somebody say harassment? No? Just me? Well…

Manners were never a problem on Clint’s set (he said I can call him that). As you all know, the man only shoots one take unless there’s a technical issue, so as an actor you don’t get many “shots” or “chances.” I don’t believe in this way of thinking. Acting’s so easy. You just do what it says on the page. It’s even easier than reading a book, screenwriters must be functionally illiterate because they format their scripts like first graders. “He RUNS to the CAR and GETS OUT and SHOOTS his WIFE.” Not exactly groundbreaking prose. But, as Mr. Eastwood explained (I changed my mind, you don’t get to hear me call him Clint), “a screenplay can get you going, they can be exciting, but at the end of the day they’re blueprints. What happens on set is the movie.”

So if you ever read a screenplay and think “What is this shit…?” just think of it like a manual or a pamphlet, not a novel. The screenplay for Cry Macho, written by Nick Schenk and N. Richard Nash, based on Nash’s novel, was written in the 1970s. There were a few revisions, but not many, and in my opinion, the film is better than the book and the screenplay (sorry, Richard—hi, Clint).

I did my homework and read the book before showing up to audition, and even though I was never asked by anyone about my research, you can see it all on the screen. I know about Macho. I know his backstory. Eduardo Minett’s character, the “kid,” raised Macho to be a fighter, and named him as such. He had been through a number of cockfights already, but wasn’t yet scarred or grizzled beyond repair. But by the time Clint’s character meets Macho, he’s seen some shit, and he’s been on the receiving end of too many spur claws for any innocent rooster. All of that pain and perseverance is up on the screen in my performance. Now, keep in mind that I was only one of 11 birds that portrayed Macho on the screen, but I was the one who got a close-up and woke Clint up from his nap with the dawn crow. Showed him who’s jefe.

On set that day, Clint was actually napping—they wrote it into the script after the fact. During and after his nap, when he was coming to, I asked him about Sergio Leone. He grumbled at first, probably sick of the question, but still he looked up at me, a perpetual newcomer to the screen, with an ounce of warmth, and that’s all I needed. “I owe a lot to Sergio. But we didn’t get along on the last two. I didn’t like when he… well, I liked starring in them. I liked being in them by myself. He wanted me to play the hero against Hank Fonda in Once Upon a Time in the West, but I had no dialogue! Nobody talks in that picture… just Bronson standing around and Fonda with his eyes wide open… I was lucky to get out when I did.”

I know he shot a lot of takes and many different setups and angles that never made it into his films. “Sergio was extravagant, and I told him that The Good, the Bad, and the Ugly was a bloated movie—it wasn’t “epic,” whatever that means. I thought the one with Coburn and Steiger was alright—” A Fistful of Dynamite, I interjected, also known as Duck, You Sucker! “…Right. Yeah. Anyway, he shot too many takes, took too much time, and he only made seven movies. Seven movies! His whole life he only made seven movies. He took too much time. Most of them are great, but he could’ve done more. He took too much time. I never wanted to direct like him, but I never would’ve become a director if I hadn’t worked with Sergio. I loved that man. Still do.”

Clint went back to his nap and we shot one of our only sequence shots together, a medium-wide with some dolly movement and a changing of lenses. It was all very exciting for me, a humble rooster from the North, helping out an old friend. One day, I’ll see him in Heaven—I make the trip every Christmas.