Roaming Kingsbridge Heights, where tourists used to flock to the Armory. 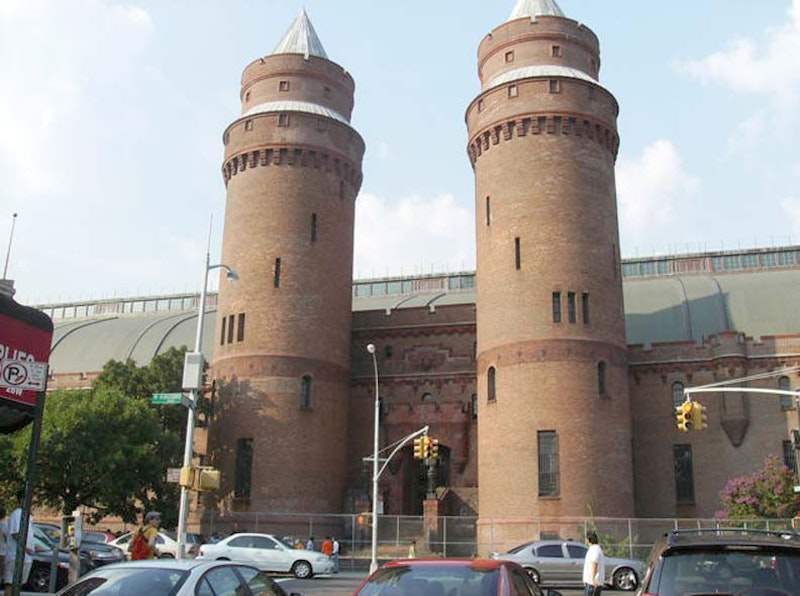 Kingsbridge Heights can be found east of Broadway, south of Van Cortlandt Park, west of Mosholu Parkway and Jerome Park Reservoir, and north of West Kingsbridge Rd. Unlike most of NYC, streets lazily wind up and down hills and the pace is rather languid. It’s the Bronx, though—stay on your toes. The Kingsbridge Armory, on West Kingsbridge Rd. between Jerome and Reservoir Aves., was at one time considered a prime NYC tourist attraction: in its heyday in the 1940s and 50s it was home to bicycle races and boat shows.

The Armory was built from 1912-1917 by architectural firm Pilcher and Tachau as a munitions storage area; when built it supposedly was the largest armory in the world. The interior dirt drill deck measured 300×600 feet. The Armory housed the 258th Field Artillery; the unit has its roots as a military escort for George Washington at his first inauguration. It’s the largest of New York City’s remaining armories, and at one time was the largest in the world. The best views are from Kingsbridge Rd., but it also looms impressively over Davidson Ave. as you approach it from the south as in this photo.

Kingsbridge Heights’ Community Board 7 has taken a lead role in the redevelopment of the Armory and it’s hoped that the immense building may play an increasing role in the neighborhood as a site for sports events once again, as well as movie shoots, concerts and cultural events. So many former armories around town are used as homeless centers (as I call them, people disposal) and I wish these 19th-century remnants could gain a more pleasant use in the 21st. 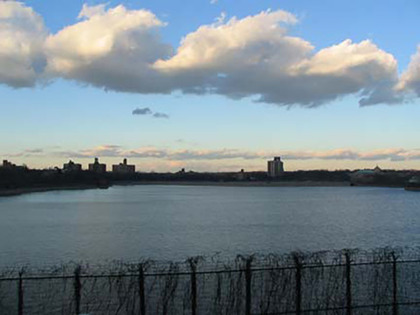 The Jerome Park Reservoir stands on the site of Jerome Park Race Course, and was named for the organizer of the American Jockey Club, Leonard Jerome (1817-1891). The Huguenot French-American was also a financier, stockholder in The New York Times, and founder of the Bronx Academy of Music. When a main Bronx artery, Central Ave., was constructed in 1874, Jerome’s wife Kate cast bronze “Jerome Avenue” street signs and had them positioned at intervals along its length. Eventually the City officially adopted the name. Among his four daughters was Jennie Jerome, who became the mother of British statesman Winston Churchill.

Jerome built the racetrack with August Belmont Sr. in the 1870s, and it was home to the Belmont Stakes until 1890. The village of Bedford Park, named for a British suburb, developed just east of the race course. After the track closed, its land was redeveloped as a reservoir serving the New Croton Aqueduct. The 94-acre reservoir can hold over 770 million gallons of water. 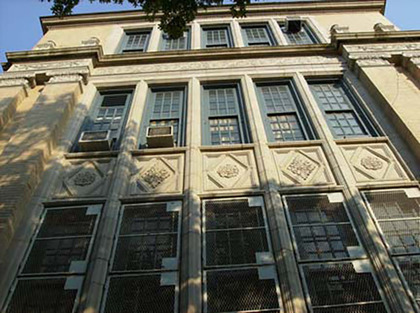 Walton High School, 2790 Reservoir Ave., was founded as an all-girls high school in 1923, became “co-ed” in 1977 and closed in June 2008. Today the building that housed Walton is home to several schools, including Discovery High School and PS 86. The design is nearly identical to that of Abraham Lincoln High School and Samuel J. Tilden High schools in Brooklyn. Throughout much of its history Walton High carried prestige. 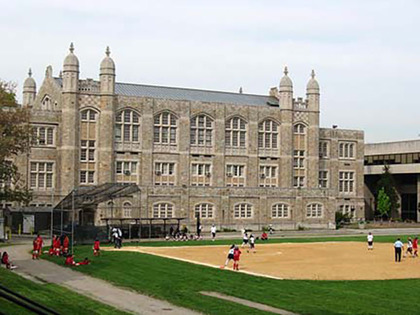 Lehman College‘s impressive campus can be entered on Goulden Ave. on the Reservoir’s east side. The college was founded in 1931 as the Bronx campus of Hunter College and was established in 1968 as an independent college of the City University of NY. It was named for New York State Governor (from 1933-1942) and US Senator (1949-57) Herbert Lehman in 1968. Then-Hunter’s handsome Collegiate Gothic buildings served as a national training site for women in military service in the 1940s, and it was interim headquarters for the United Nations in 1946. The original four buildings, Gillet and Davis Halls, the Music Building, and the Gymnasium, were completed in 1934. The campus also boasts more recent buildings designed by internationally renowned architects Rafael Viñoly and Marcel Breuer, that form a striking counterpoint to these traditional Gothic buildings. 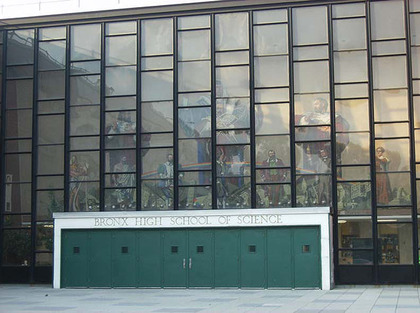 The Bronx High School of Science was founded in 1938 as an all-boys’ school on Creston Ave. and E. 184th St. (now Intermediate School 115). The current edifice was opened in 1959 on W. 205th St. and Goulden Ave. The school has developed a worldwide reputation as one of the best in the country and receives over 20,000 applications annually. The school colors, green and gold, represent chlorophyll and sunlight “both of which are essential to the chain of life” according to its first principal, Morris Meister.

The present building was designed by architectural firm Emery Roth and Sons. At the main lobby entrance is a large mural by Frank J. Reilly depicting some of history’s greatest scientists such as Marie Curie and Charles Darwin. The new campus had state-of-the-art labs, classrooms and technical studios. In 1978 faculty member Stuart S. Elenko founded Bronx Science’s Holocaust Museum and Studies Center, which moved into its own space separate from the high school in 2006. 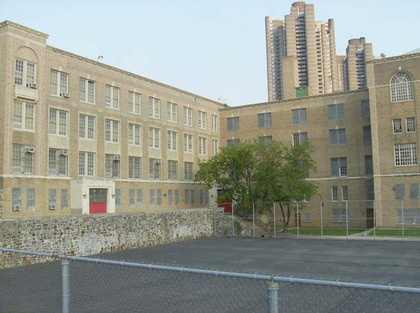 DeWitt Clinton High School is housed in a magnificent neo-Classic campus built in 1929 at the northeast end of Jerome Park Reservoir, where Goulden Ave., Sedgwick Ave. and Mosholu Parkway come together. (The school was dedicated October 29, 1929—Black Friday, when the stock market crashed). This is the school’s third building—it was founded as Boys’ High in Greenwich Village in 1896, moved to 10th Ave. and W. 59th St. in Hell’s Kitchen (which some call Clinton) in 1906, and then to the Bronx 23 years later. It was the last gender-segregated public high school in NYC until 1983. At one point in the 1960s, 12,000 students were enrolled, making it the largest high school in the world: at present, over 4000 attend. 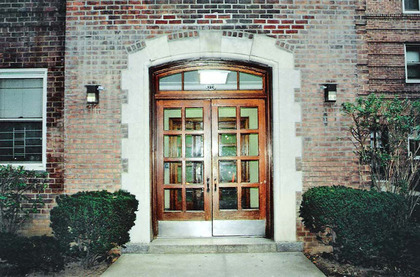 Doorway on Hillman Ave., Amalgamated Houses. The Amalgamated was the first union-sponsored housing cooperative in the United States, sponsored by the Amalgamated Clothing Workers Union under the leadership of Sidney Hillman (for whom Noble Ave. was re-named in 1950) and created by Abraham E. Kazan, “the founder of cooperative housing in the USA.” The first buildings between Sedgwick Ave. and Van Cortlandt Park South went under construction in 1927 and the latest additions were completed in 1970.

The structures were built inexpensively and with no frills, but they produced an attractive and comfortable environment for families and community interaction. Plus they had style. Similar to housing projects of today, they were a series of interconnecting high-rise buildings, organized around communal public space. But the developer and the architect made an effort when it came to design. The public spaces were green spaces with paths, shaped gardens, and fountains. The buildings were designed in a Tudor style with large windows.

Amalgamated is one of three housing cooperatives in the northern Bronx created in the 1920s, along with the Sholem Aleichem Cooperative on Giles Pl. and the United Workers Cooperative Colony (Allerton Coops) which still displays the hammer and sickle symbol over some of its doorways. 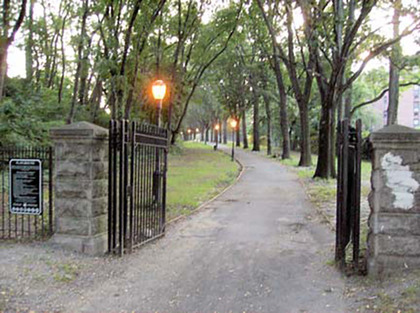 The Bronx is hilly on Jerome Park Reservoir’s upper left flank, and streets in the area meander around or occasionally drop off to what are impressive vistas on clear days. The street plan, prominently featuring Sedgwick Ave. on the reservoir’s west side, and the curving Orloff Ave., Cannon, Stevenson and Giles, were laid out by Frederick Law Olmstead, co-architect of Central and Prospect Parks.

Today, Fort Independence Park represents the only public green space that’s directly adjacent to the reservoir, running along Sedgwick Ave. between Gouverneur Ave. and W. 238th St. There’s an original gatehouse here and sticking your nose through one of the holes in the iron door produced a chlorine smell from the nearby reservoir. Fort Independence was built under the direction of Colonel Rufus Putnam in 1776 to protect the American army and to safeguard the line of the Harlem River. An entrenchment 10 feet wide and three-and-a-half-feet deep surrounded the austere fort. From its elevated position, the site commanded an extensive prospect of the surrounding countryside. In the fall of 1779, the fort was destroyed by British forces led by Sir Henry Clinton.

NYC acquired the land by condemnation in 1895 and this became a NYC park in 1915, the same year cannonballs from the old fort were unearthed. The park acquired its name with this circumstance.