Scenes from the pre-residential Puck Building. 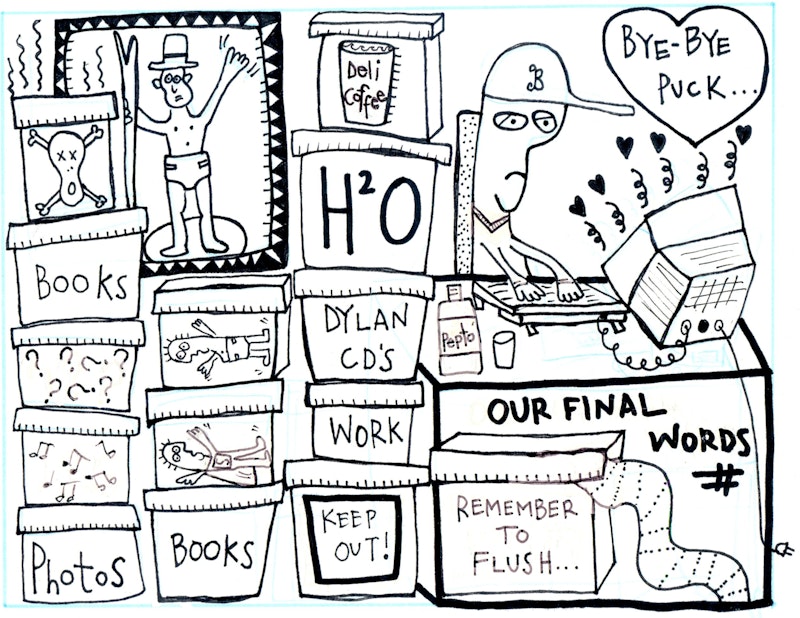 A New York Times story about the sale—for $28.5 million—of a Puck Building penthouse was circulated last week among former New York Press staff members, usually accompanied by a “Can you believe this!” sort of comment. Frankly, it didn’t faze me that the offices that housed my newspaper for eight years—1989-97—found new life. Better than a vacant building. It’s mildly interesting that developer Jared Kushner, Donald Trump’s son-in-law, is the principal in the firm that’s turned a once-grand building that was home to Puck magazine (1887-1918), and then Spy in the mid-80s, into what can only assume is a rather gauche set of residences for extraordinarily wealthy men and women who, two decades ago, wouldn’t have set their well-shod feet downtown.

A snippet of history. NYPress started publishing in April of 1988—in the then-vibrant market of print publications, including the fat and smug dailies, our competitor The Village Voice (which charged a buck at the time), 7 Days, New York Observer (which Kushner owns now) and so on—in a second-floor modest office at Spring St. and Broadway in Soho. A year later, upon hearing that Spy—at its peak—was moving to Union Square, a real estate agent asked if we’d like to assume its space; yes, we did, a reasonable deal was struck, and there we were, on the top floor. Graydon Carter, a co-founder of Spy and now Vanity Fair’s life-support editor, was kind enough to leave me a bottle of Barolo in his private office, which he knew I’d take over. It was a ramshackle outfit we had, with people scattered around in the mostly open space, and once the paper grew, we also took over the eighth floor, where editorial and accounting took respite from the wilder top floor.

Not sure if I believe in ghosts—hope so!—but here’s hoping that the new tenants are awakened in the night on occasion from echoes of a more raucous era. The snarled lips and jaw-dropping would be priceless. The illustration above—drawn by my wife Melissa for my MUGGER column—captures the melancholy I think everyone (save our accountant) felt when the paper, unwilling to accede to a rent-gouge by the Puck owners, took off for cheaper, and more commodious space in the then-bargain bin Garment District on 7th Ave. It sucked leaving the Puck—with its convenient Lafayette and Houston St. location, proximity to any number of great bars and restaurants, the hand-operated elevator that was Polish immigrant Josef’s charge, and a fairly short walk to my home—but a savings of seven grand/mo. in rent was nothing to sneeze at.

My de facto consigliere, Paul Abrams, a straight-laced accountant from suburban New Jersey who came to the Puck two or three times a week to keep the business staff in line, coined my favorite description of the staff that put out the paper each week. “It’s a circus of humanity,” Paul said one day, and that was true. Every style of dress, from salespersons wearing suits and smart dresses, to the editorial and art departments where any sort of clothes (not too much nudity, unless it was for an assignation on the roof) worked, goggle-eyed interns—many of whom later took fulltime jobs with us—in sensible collegiate garb, and of course, the usual 90s smorgasbord of piercings, tattoos and the like.

Rampant political correctness on college campuses is bruited about, with good reason, these days, but it wasn’t so much different two decades ago in Manhattan. I remember one really annoying lawsuit levied against the paper by a disgruntled employee who was fired from her production assistant job for chronic tardiness, inattentiveness and a shitty attitude. She was warned several times, a paper trail was set up detailing her misconduct, and still… the paper was sued for an outrageous sum. She claimed discrimination on four fronts: gender, sexual orientation, bias against Hispanics and another I can’t recall, perhaps a rebuke for not bathing often enough. She hired a lawyer whose office was above a hot dog stand, and after some time-chewing negotiation, Paul was able to settle for a very modest sum. Blood money, it goes without saying, but what business owner wants to take a chance (and waste money) on a trial?

That’s a sour note, and wasn’t often typical of our stay at the Puck. There were the SRO “Best of Manhattan” parties every fall in lobby’s Ballroom, where eventually we hired bouncers to keep out the crashers; the stream of regular writers and illustrators who’d stop by at least once a week and the satisfaction of forcing the Voice to give away papers in 1996. The staff ranged in age from 16-70, and included many who went on to publishing, advertising or Hollywood notoriety after leaving NYPress. I believe a book was written about the paper—I certainly spent enough time with the author—although I’ve never seen it, so perhaps it never found a publisher. Not surprising: while the enterprise was rewarding, and a lot of fun, to me and many employees, its history isn’t exactly best-seller material. That’s not my concern today, however; rather just one more goodbye to the Puck Building, which, one hopes, will some day again bear witness to outlandish behavior.