Why all the fuss? 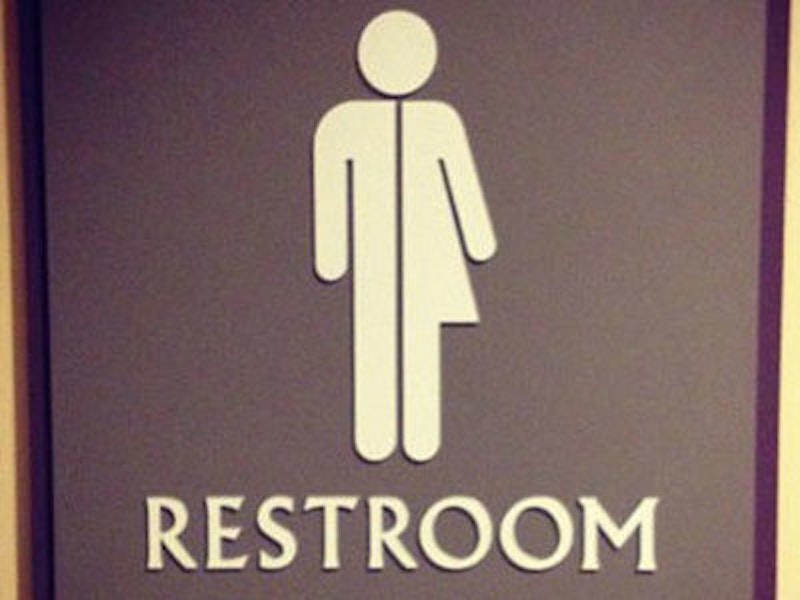 Every time I need to take a piss in public these days, my hands get preemptively clammy. Although I live in Brooklyn, where the Crown Fried Chicken guy treats me like a lady (easily the classiest greaseball joint I’ve ever patronized multiple times a week), all it takes is one dickbag who thinks he understands gender better than me to ruin my day. And it’s all because of these ridiculous bathroom bills, the utter pointlessness of which their proponents don’t seem to realize.

I’ll assume that most of us understand what a “bathroom bill” is: a piece of legislation that strictly segregates defecation facilities based on male- and female-assigned genitalia. (We will skip the part of the lesson where I’m a girl with a dick, as that’s clearly too advanced for the class we’re dealing with here.) Since Houston voted to prevent “men” from entering the women’s restrooms last year, there’s been renewed vigor to introduce legislation openly barring trans people from using appropriate facilities around the US. South Dakota came within a hair’s breadth of doing so, but for Governor Daugaard’s veto this week. That’s not a victory, though; that’s a close shave with disaster.

These bills have gotten such a huge lobbying push because of influence by organizations like the Family Research Council, whose research I believe consists of consulting everyone on the Council as to what a family should look like and going with that forever. You may think I’m being snide here, but check their policies on bathroom bills, written by Senior Fellow for Policy Studies and amateur Conan O’Brien impersonator Peter Sprigg. Sprigg writes in his introduction that the word “transgender” is “an umbrella category that includes transsexuals (people who have had ‘sex-change’ surgery), transvestites (cross-dressers), ‘drag queens’ and ‘drag kings’ (people who cross-dress for entertainment purposes only).” I don’t really have a joke for that, because this is a grown man who doesn’t see the difference between someone who identifies as female and someone whose job description includes the phrase “female impersonator.” I’d pity poor Sprigg for his reading comprehension, if he didn’t have my nuts in his gender-essentialist vice.

But why all the fuss? What is it about me, my roommate, and the several million other Americans who identify as trans that make Sprigg, the FRC, and their followers so hyperbolically afraid? If you ask them, it’s because allowing people into any bathroom they choose poses a credible safety risk for women and children. Sprigg again: “The government should never purposefully threaten the public safety of women and children by creating the legitimized access that sexual predators tend to seek.” Now that’s obviously a monstrous insult, implying that my identity is barely a degree removed from that of a rapist—but okay, let’s agree for the sake of argument that no government should pass a law that would create a scenario in which a sexual predator could gain access to private facilities where they do not belong.

The theory is that, if non-passing trans women are allowed to use women’s bathrooms and locker rooms, cisgender men can simply claim to be trans to sneak in, get an eyeful, and potentially commit an assault. (We’ll leave aside the issue of why these men couldn’t do this anyway, as the vast majority of public restrooms have no security guards.) Sprigg and the FRC thus urge lawmakers to restrict bathroom access to those people whose “external genitalia, internal sex organs, and chromosomes” meet the “objective biological reality” of a cartoon on the door. This would force, at minimum, trans people who have not had bottom surgery to use facilities that do not match their gender identity and/or presentation. Slam-dunk common sense legislation for the right, yeah?

Nah. Because as we’ve established, Sprigg and his cronies don’t actually understand how being trans works, so as impressed as I am that they knew the term “drag king,” I don’t think they quite realize that trans men would be forced into the women’s room. Whereas the trans bogeyman in the FRC’s mind seems to be a spooky non-passing woman (Sprigg once more: “adoption of the ‘gender identity’ of the opposite sex is often highly unconvincing and therefore disturbing to witnesses”), trans men also exist, people—and some of them pass insanely well. Testosterone is far easier to introduce to a body than to suppress, as my hairline and vocal range can attest. I know some trans men who’ve been on hormones for a year or more, and who Sprigg might shake heartily by the hand before inviting them to go on a rousing night’s queer-bashing.

Here’s my point: if we displace trans men, and trans men have a good chance of looking just like cis men, what’s to stop these cis male sexual predators from waltzing into the women’s room anyway—but under the guise of being a trans man? If there’s really not going to be a genital-checking security guard at every door, all a predator would need to do to fly under the radar is make some remark to the effect of “I can’t believe I have to use the women’s room again,” and voila! Cover established—now to huddle in a stall until the right time to strike.

This doesn’t even come close to analyzing all the ways these anti-trans bills and their accompanying rhetoric damage equality in America, but it does point out one very simple truth. If you claim to be against trans access to restrooms because of “public safety,” you are either lying or thoughtless. I’ll let you decide for yourself which one.