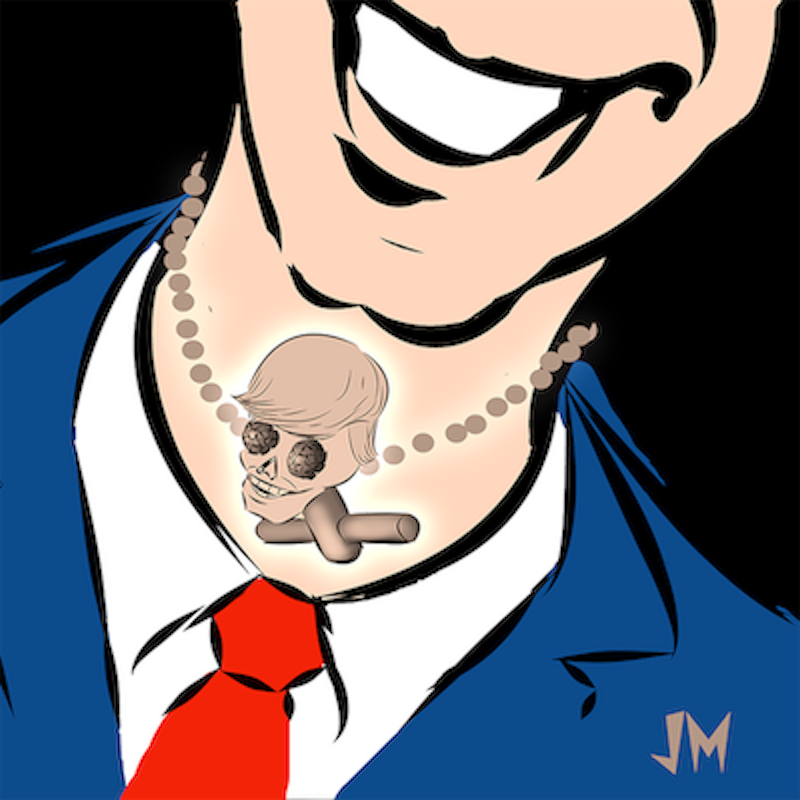 New Hampshire? He calls it Vermont. Which is a mistake, or conversely, a wry commentary on bourgeois life any of us could make. It may or may not be art, but for sure, who among us hasn’t referred to the Green Mountain state as my boss?

All right, that’s a bridge so far. But when you factor in mistaking his boss for Barack America’s Funniest Home Videos, you gotta step back and take stock of Biden’s 2020 presidential campaign juggernaut powered by sheer rolling Dada, at the same time inexplicably goosing his electability.

Biden recently denied any diagnosis that tagged him as Dadaist. He insisted he was no more avant-garde than Ovaltine, itself a coyly provocative stance. All this still beggars the question how Joe can skate on and on, like some Marcel Duchamp cosplayer from the Ice Capades, speaking incoherently, or meta-incoherently, as the current occupant of the White House, take your pick.

That’s right. Him. Swanky, AKA President Ruby-Eyed Skull Cufflink Big As Your Head.  Swanky can say anything. Lemme spell that. A-N-Y-T-H-I-N-G. The less, shall we say, non-linear the talk, the bigger the crowds. And you’d think a politician like that would never in a million years monetize such a sure-fire secret weapon.

But no. If any reporter, if they were any kind of real newshound, would do their due diligence, they’d crack the latest Sharper Image catalog. That’s right, flip past the steaks this thick and the vodka boiled to perfection, or whatever they hell they do with that joy juice, and look real close in the back pages for a small item listed under Lucky Spiritual Jewelry & Assorted Mojo Hands.

Ever wish you could say wicked random shit and nobody would blink? You can do it wearing a Saint Swanky Medallion. Imagine addressing large crowds in freestyle non sequitur, and then they clap and give you money. Mention salamanders and Peek Freans and Ukrainian cosmetology in the same clause, and come across like Winston Churchill. Your Saint Swanky’s Medallion makes it all good, like permanent training wheels, so you sound steady as she goes, no matter how far off the rails!

Beltway street talkers always tattled that Joe kept a fresh copy of the Sharper Image catalogue in the crapper, so it doesn’t take a Perry Mason, much less a Bob Woodward, to infer the Vice President was an early adopter when Saint Swanky’s Medallions hit the market, shortly before the first 2020 Democratic presidential debate.

Washington insiders tell me Biden may not be the only candidate experimenting with Swanky’s weirdly disarming charm. While reports of Elizabeth Warren wearing a little ruby-eyed skull cufflink replica of the current president around her neck are too sketchy to confirm, suspicions will certainly be raised if bold as brass, she evolves her Native American genetic heritage into a walking installation. We’re talking campaign as zenomorphic metaphor. You know, something more amazing, more Transhuman, announcing fraternal cousinhood with a 1970 Plymouth Duster, by the name of R. Mutt. Watch for it. And if her numbers skyrocket, you’ll know the hell why.

Speaking of aesthetics, kudos to Biden’s handlers for artfully pancaking his medallion such that if you’re not looking for it on TV, you probably won’t see the little Swanky bobbing up and down on Joe’s Adam’s apple. Trust me, it’s there. Sit close to the TV screen, ruin-your-eyes close, close enough to get an X-ray facial like we did in the old days. For sure it’s no fun at all if Biden isn’t on, and it can be a big drag with some of those tedious jokers.

So you gotta make your own debate fun. Do goofy stuff like we used to do, like get silly and take turns poking Nixon in the eye. Hubert Humphrey too. And Howard K. Smith for good measure. Try it with Chuck Todd. There was a school of thought, if enough people did that all at once, those talking heads would feel it a little bit and rub their eyes. And if they did rub their eyes, what a crack-up. Big, big, Richie-Rich, homemade-in-America fun.

Even today, you see a lot of stuff up close you miss sitting back there on the couch like some citizen who thinks they’re so big. So just hang loose, husband a pile of snacks right there on the rug smack dab in front of the flat screen and maybe you’ll spy Joe Biden’s secret crazy Dada talk weapon for yourself while pounding down the Lorna Doones.

I’m telling you. Nobody knows how or why it works. Art or no art, it just does.

And as Joe might say, “It’s the greatest thing since sliced Vermont.”