What Mom Nearly Lost at the Hospital 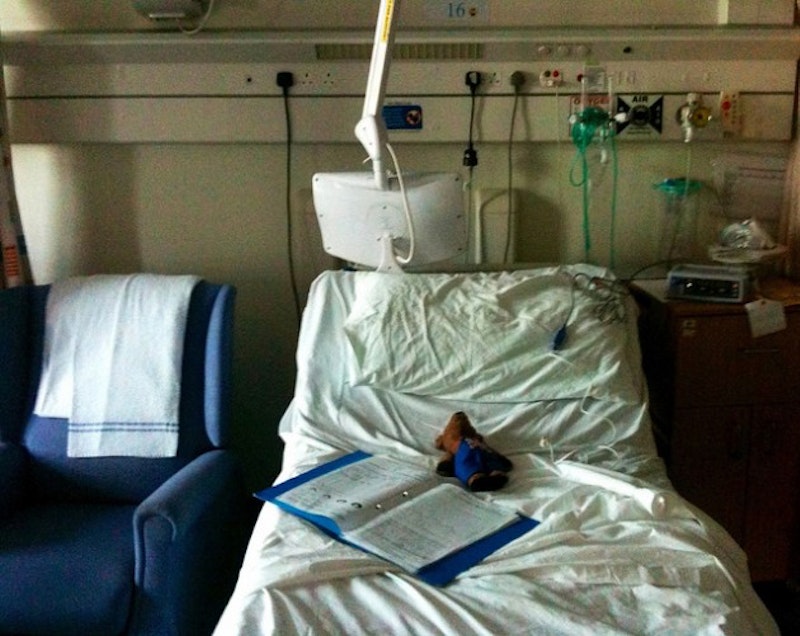 This is part of a series on caring for my mother. The last post, "Caring for Mom," is here.

On November 24, 2014, during a routine trip to the grocery store, my mother fell and fractured her right femur, which resulted in a partial hip replacement. I spent two hours with her, first in the emergency room and then later in pre-op. Three hours later, the surgeon informed me that the entire hip had shattered and surgery had gone well. He said Mom would need at least three to six weeks to recover in rehab. He smiled and went about his business and, relieved she’d be okay, I thought, “Three to six weeks? That’s not bad.” At that moment, I’d no idea of the nightmare that was to come.

Four days after surgery, Mom transferred to a rehabilitation center. It wasn't the physical pain but her mental condition that was the issue—something wasn't right. She was tired and extremely confused, especially in the early morning and evening hours. After just one week in rehab, she was sent to the emergency room with pneumonia and a serious urinary tract infection. She endured a nearly two-week hospital stay, most of it spent in the critical care unit. Upon discharge, she entered a different rehabilitation facility and shortly after, she still showed signs of forgetfulness and confusion in the early morning and evening hours. She was admitted to the emergency room again and the doctors concluded that the original pneumonia had never cleared up. They also diagnosed her with severe dehydration. By this time, Mom had done no physical therapy and was so physically and mentally exhausted she could barely sit up in a chair.

Mom's mental impairments were significant enough to delay her recovery and rehabilitation. The medical professionals treating her tried to convince us she was showing signs of sundowners and early dementia. We explained more than once that prior to the surgery, she was mentally coherent and completely independent. I told them that she drove, cooked her own meals, shopped online, paid her own bills, and managed all her affairs by herself. I told them in no uncertain terms, “This is not dementia; there is something seriously wrong with her,” but my words fell on deaf ears.

Mom's mental condition worsened. She began saying bizarre things that made no sense. She was confused, disoriented, and even hallucinating; my siblings and I couldn’t get anyone at the hospital to acknowledge there was something serious going on. Mom thought she was going crazy and though we did everything we could to ensure her that wasn’t the case, we wondered if it was true. How could we know for sure it was temporary since it wasn’t being treated, the condition was only getting worse? The more her mental condition declined, the more her physical one did as well. Her mind was so messed up that she couldn't do therapy and thus her body became weaker by the day.

I conducted my own research into Mom's medical condition. While investigating her symptoms, it didn’t take long to discover some frightening answers related to her symptoms, two of them side effects of anesthesia and hospital-related delirium, both of which can severely affect senior patients. The Mayo Clinic, National Institutes for Health, as well as other reputable medical sources designate delirium as an emergency—a serious illness that requires immediate attention. The NIH states, “Hospital-acquired delirium is a common and dangerous condition that often goes unnoticed and untreated...” and also says that though it’s a temporary condition, it’s severe and "can lead to longer hospital stays and negative long-term outcomes.” When I explained to Mom’s doctors and nurses what I’d discovered, again they ignored me. They preferred to believe that because she was 68 years old, it was dementia.

Eventually, with the help of strong antibiotics for the pneumonia and a medication administered by a psychiatrist to help with depression and appetite, Mom became well enough to return to the previous rehab facility. There she endured a grueling two-month rehabilitation in which her mental condition improved somewhat but her physical condition actually worsened. While the surgeon who repaired Mom’s hip did a superior job, and she received very good nursing care, her mental well-being suffered dramatically to the point where, if the hospital had not discharged her when they did that second time, I don’t think she would’ve survived.

Mental well-being, especially that of senior patients, needs to be addressed more seriously in the hospital and rehabilitation environments. Prior to and after Mom’s surgery not a single doctor, nurse, or social worker attempted to counsel me on the possible side effects of the anesthesia or the complications of extended hospitalization. This counseling would’ve helped our family know the immediate signs of serious problems, what actions to take and what kind of help she would need. More importantly, not a single medical professional I talked to knew what hospital-induced delirium was and when informed of what I’d learned, they refused to acknowledge it as a real condition.

According to the Census Bureau, as of July 1, 2013, there were 44.7 million individuals (14.1 percent of the population) aged 65 and older. The Bureau predicts this number to increase to 98.2 million (one-in-four Americans) by 2060. Given this growing number and the health issues that come with aging, we must be more diligent in dealing with issues related to senior care. Medical personnel must be educated in hospital-induced delirium as well as post-operative confusion and the risks and consequences of anesthesia. In turn, families of seniors should be counseled properly prior to hospitalization, surgical procedures, and rehabilitation in an effort to assist them in making the most appropriate plans for their loved ones’ post-operative care. This knowledge would ensure a better and more rapid healing and rehabilitation process that would allow America's seniors a chance to once again be vital and functioning members of society.