A Matter of Quid Pro Quo

A rider should groom the horse before riding to ensure comfort for both parties. 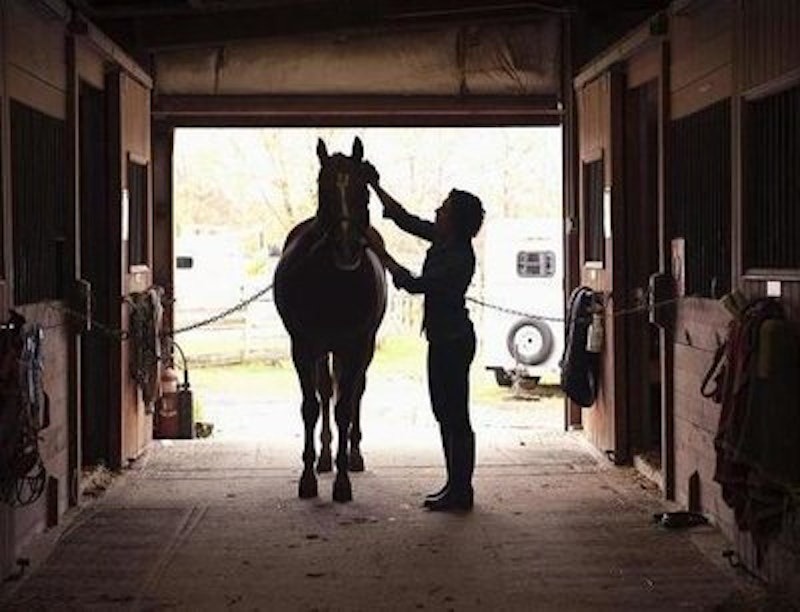 Further adventures in riding: two weeks ago, I went to The Cheshire Horse in Swanzey, New Hampshire, to purchase riding boots, breeches, and other paraphernalia. No spurs: I see no reason to spur a horse and Dorothy Crosby, my instructor, a practical woman, agrees with me.

Breeches have leather patches on the inner thigh, the saddle sides of the legs that help one post—rise in the saddle at the trot—to manage the horse. The breeches are a mixture of cotton and unnatural fibers that stretch. Unlike the old army riding breeches of khaki twill that belled at the thighs and hips, they cling. My wife claims she finds them, shall we say, interesting. Having spent some time in my early life trying to have the Municipal Building at 1 Centre St. in Manhattan rezoned for natural fibers, I reserve judgment.

Riding boots also help control the horse while being much easier to place in or remove from the stirrups than my rubber Wellingtons. So, today, when I went to find Julio, the horse I’ve been riding at Ms. Crosby’s stable in Stoddard, New Hampshire, I arrived in the kind of polished high boots one might expect from, say, George S. Patton in 1939. I then plunged through three inches of mud to get and bring him in for grooming. With Julio, there’s always some physical comedy before I get him to the stable because there are other things he would rather do right then than go with me and so he will walk about. Horses, unlike most humans, always live in the moment.

Sooner or later, though, I catch Julio and lead him in. A rider should groom the horse before riding to ensure comfort for both parties. Cleaning his back, where the saddle will lie, is only a part of it. Julio likes to roll in the field. At this time of year, from late March through early May, New Hampshire has mud season. So, when I finally get him into the stable, he’s pretty dirty.

Even with some degree of efficiency, the use of several brushes, combs, picks, and other devices takes about half an hour. That too may have an element of physical comedy, particularly if, like Julio, the horse doesn’t think much about where he places his hooves. Half a ton of horse can make his presence known, as I learned earlier today when he placed his hoof on my right foot. Thankfully, I was no longer wearing my rubber Wellingtons, which might not have taken this quite as well as my Irish-made riding boots. When Julio put his foot down, I took a deep breath and exhaled, refraining from using a few consonant clusters that leapt into mind. It was my fault: I should’ve turned him while leading from the front instead of remaining at his side.

Having cleaned the horse, one saddles and bridles him, leads him out to the mounting block, climbs into the saddle, and rides. I’m slowly absorbing the discipline of riding at the trot, which requires one to rise in rhythm with the horse. It’s working certain muscles that I may not use as often as I should. I’m vaguely reminded of an admission Graham Greene once made to Anthony Powell: that he had not truly known physical love until he had known a horsewoman, due to the development of the muscles in the loins.

Anyway, having done all that and returned to the stable, what happens next? First, I groom Julio again, going through the entire process. He has allowed me to ride him; the least I can do is clean him up so he can relax. It’s simply a matter of quid pro quo.

At this time of year, he’s shedding his winter coat. I remove nearly as much hair from him during the second grooming as I did during the first. Once I’m done, I place a waterproof sheet over him (an exercise in straps and Velcro), lead him from the stable, remove his bridle, and release him. Then, back in the barn, I clean the hair and other detritus that fell from him during his grooming, including any manure, and sweep or shovel it out the door.

The other day, by power of association, I recalled the French cavalryman and politician who, opposing the adoption of tanks during the mid-1930s, thundered during a debate in the Chamber of Deputies, “What would you have: the stench of gasoline or the noble scent of manure?” That was after an obscure colonel, Charles de Gaulle, had published his classic argument for the use of tanks in modern warfare, The Army of the Future. The book was ignored in France but a bestseller in Germany. General Heinz Guderian, whose armored cavalry smashed through the French lines at Sedan in 1940, particularly admired it.