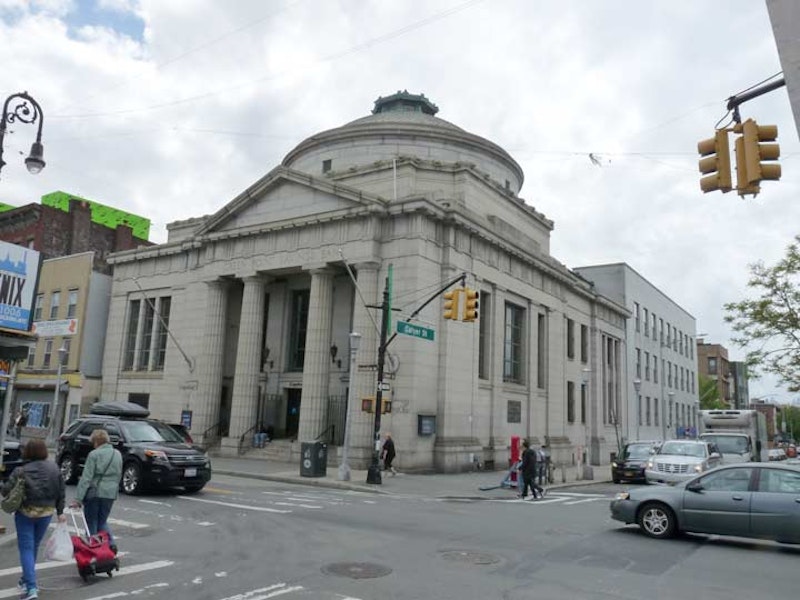 The domed Green Point Savings Bank was designed by the firm Helmle and Huberty, which also designed several buildings in Prospect Park, including the Tennis House and the triumphant shelter pavilion in Msgr. McGolrick Park several blocks to the east.

Greenpoint, known to some as the “garden spot of the universe,” a name vouchsafed it by its colorful early 20th century alderman, Peter McGuinness, rests at the borough’s northernmost point; Queens’ Long Island City is just a short skip over Newtown Creek. Eons ago (well, 1982) I rented an apartment in Greenpoint on 193 Green Street for $275 a month. My girlfriend’s address at the time was 931 Newkirk Avenue in Flatbush. I sensed a synergy: if she moved in with me there, she would still keep the same numbers. In the first week, I almost fought with one of the local toughs, and I grew tired having one electrical outlet in the whole apartment and having the bathroom in the kitchen. What I had thought was kismet turned out not so much, as the girlfriend was gone by the fall, and I moved to 73rd Street in Bay Ridge where I spent the next eight years.

Some of my happiest times were spent in Greenpoint, though, since it has hidden passages, hidden histories (it was where the Civil War ironclad Monitor was built, and it was once a world capital of the industrial “black arts”: glassmaking, printing, pottery making, oil refining, and cast iron manufacturing) and had bends in the road to explore. In the early 1980s, a friend took an apartment in a building at Oak Street where it curves to become Guernsey; it had a magnificent bay window in front, and if you angled your head the right way, you could see the Empire State Building out a window in the back. It was a big, shambling old place with a working fireplace. The friend moved out many years ago; some other lucky devil has it now.

Greenpoint, despite the city’s best efforts to homogenize it with a 2005 rezoning that enabled luxury tower construction (these have begun to appear along West Street, where the city’s last wooden brick sidewalk was recently destroyed) still has a small-town atmosphere distributed on narrow streets emanating from its x-axis, Greenpoint Avenue, and y-axis, Manhattan Avenue. Thousands of Poles still live here and there are still lots of Polish restaurants, old and new, delis, and groceries with Polish-language lettering in the window. My friends from college who lived in Greenpoint were of Polish or Czech extraction. 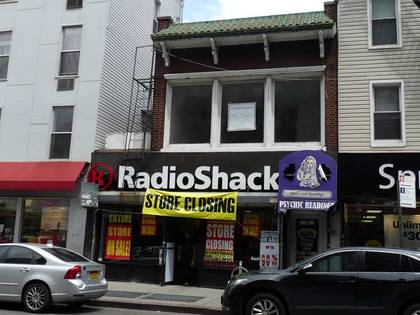 Greenpoint preserves its ghosts well. Riding on a bus in about the same era my friend lived on Oak Street, I spied a stenciled sign on a second-floor window at Manhattan and Meserole: “Preston Hazlewood, attorney at law.” This was from back in the days when they still named people Preston Hazlewood. Soon, the ghosts of Radio Shack clerks demanding your address and phone number when you buy a button battery will inhabit it. 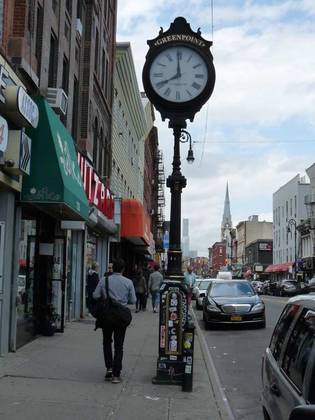 I’m not sure, but sometimes things lose just a bit of their charm when they get landmarked. Bomelstein’s Clock on Manhattan Avenue between Meserole and Norman was rusty, its paint peeling, its hands stopped, when I first photographed it in 1998. It had been designated a landmark before then, but it’s since been restored and is telling time again. The old Bomelstein’s name has been removed. On my latest visit, one of the clocks was stopped, so perhaps its decline back into shabby gentility has already started.

New street clocks of traditional and modern design are popping up all over town. An ornate one was installed at the Tribeca Grand Hotel at 6th Avenue and White Street a decade ago, and there’s a shiny new one in an incongruous suburban setting on Bell Boulevard in Bayside Hills.

The best ones, though, are the ones that have been there, suffered through their years of abandonment, and belatedly restored. Two magnificent models grace Flatbush Avenue in Park Slope; 3rd Avenue between 84th and 85th on the Upper East Side has a clock that used to mark a pawnbroker’s; there’s another jeweler’s sidewalk clock on Steinway Street in Astoria; another is across the street from where the old Gertz department store used to be in Jamaica. Two hanging from the newly restored apartment building at Broadway and Chambers street indicate the building’s former use as the home of the old New York Sun newspaper (not its latterday namesake). 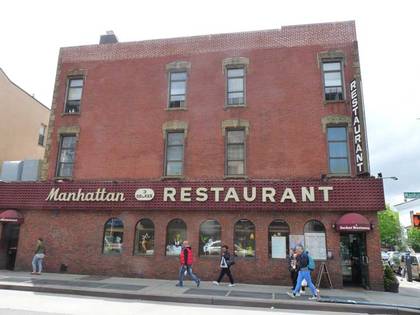 A pivotal day in my life occurred in December 1992. A friend and I were driving around northern Brooklyn, and we stopped into Peter Luger’s on Broadway in Williamsburg just to see what the place looked like. We sipped a couple of mugs of beer at the bar, all the while watching white-coated men dash about with piles of raw steaks on them. It took a couple of years, but I eventually got into the place for a steak dinner with three friends on a couple of occasions. Both times the porterhouse dinner for four came to $200 and I imagine it’s a lot more these days.

So we didn’t eat at Luger’s that day but we did wind up at the Manhattan 3 Decker Restaurant at Manhattan and Norman Avenues, and let me tell you, I had the best open faced hot turkey sandwich I ever had in this place, bar none. I have eaten in some of the Polish restaurants in Greenpont such as Christina’s, but this place had the greatest impact on my palate. What can I tell you? 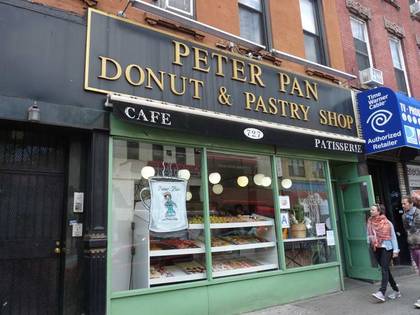 Similarly the Peter Pan Donut & Pastry Shop on Manhattan near the clock features the best donuts I have had bar none, and has attracted something of a cult following. I have bought donuts here for holiday gatherings even though I live in Little Neck and the holiday gatherings were in West Windsor, NJ outside of Princeton. 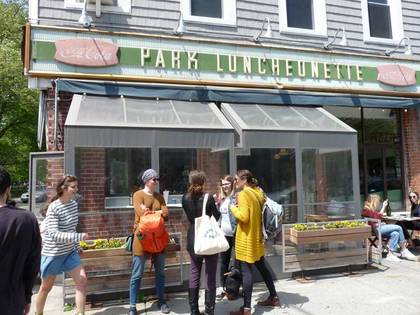 I have not eaten at the Park Luncheonette, but I am heartened by its recent revival. Its original iteration closed in 2009 and I was saddened to see the location at Driggs Avenue and Lorimer Street stripped bare, including its green and gold signage. It’s back now, complete with the restored signs.

The yellow tin letters on green background were offered to shopkeepers by local Coca-Cola bottling companies. The letters were attached to the green portion of the sign to spell out whatever the vendor wanted and are referred to as the “privilege panel.” As a rule, a Coca-Cola advertising sign was located somewhere on the sign, as it is here.

One of Greenpoint’s several quirks that has now utterly vanished is what was called “Greenpoint's "Enchant Villages" (the 'ed' was added later). They were the work of a now-deceased Greenpoint resident named Tony, and were located on the corner of North Henry and Herbert Streets.

Tony created the Villages in 1991. The story goes that he suffered a heart attack and was then inspired to create his vision of the world as he saw it: a beautiful place, a global village. The Villages were represented by articles and sundry items from Tony's house, helpfully hand-labeled. Tony's aim was to celebrate different cultures of the USA and of the globe, shot through with good old American patriotism. The Red Sea was represented by a fish tank. I'm told that actual fish used to swim in it, and the tank used to be lit. Mount Ararat, where Noah's ark landed, was signified by plastic deer climbing a mound. Ireland was two Irish coffee mugs; other cultures were represented by Amish doll figurines.

By the time I found them in 1999, the Enchant(ed) Villages were mostly in ruins. In the 1990s when Tony was alive, the fish tank burbled, Christmas lights lit up the enclosure, and Greenpoint and Williamsburg residents would walk blocks out of their way to see it.

Around this time, though, Williamsburg firefighter Dave Herman took up the slack. I don’t know if he ever saw or heard of the Enchanted Villages, but he installed his own collection of NYC memorabilia in a picture window in his apartment building at Grand and Havemeyer Streets. We now know it was one of the city’s better museums, the City Reliquary on Metropolitan Avenue.