Honey, Get Me Rewrite

Comey’s firing pushes all other news to the side. 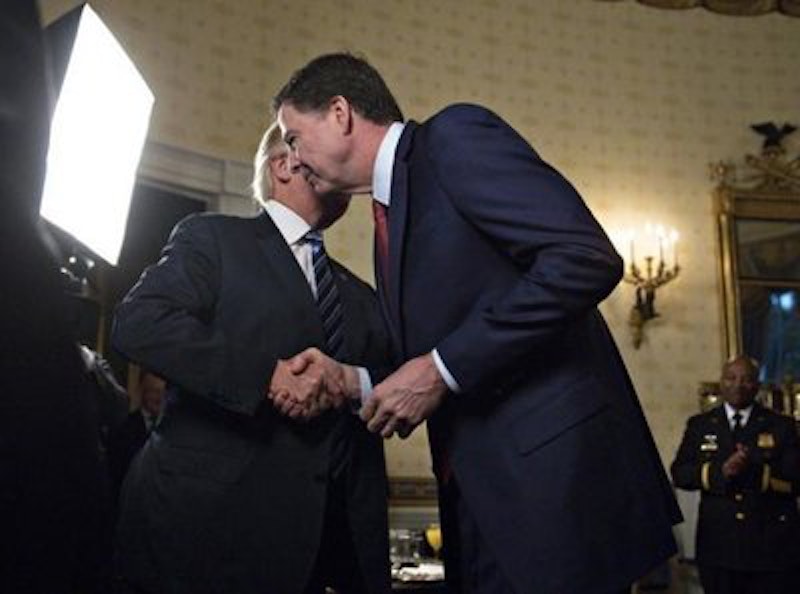 The velocity of history—the speed at which news happens and eventually becomes a historical event—often bombards the human brain with more information than it can process at the time it occurs. For the most important three letters in the word news are N-E-W. The rolling effect of news is that one event overtakes another in a jumbled cascade that’s left for others to judge and sort out, juxtaposing the old with the new in linear importance that makes sense.

So saying, until the C-bomb dropped, this was going to be a column on the muddled healthcare mess. It began: “Maryland’s Republican Gov. Larry Hogan has survived lengthy and painful cancer treatment, mourned the death of his sister from a degenerative brain disease and recently buried his father who died of a massive stroke. You’d think there’d be no need to worry about his opting out of the GOP’s attempted retread of the Affordable Care Act. But Democrats may be having second, preparatory thoughts about spiking ACA repeal as a campaign issue next year. Hogan dinged the idea of health care neutrality when he appointed an enemy of Obamacare as head of the state’s health care commission.”

But news competes with news for attention, and healthcare was abruptly driven from the headlines after a week of the Republicans’ mock-celebration of the House’s passage of its Rube Goldberg-replacement plan, which the Senate promptly rejected in favor of a future version of its own.

Try as he might, President Trump just can’t keep Russia out of the headlines and off cable news. Firing FBI Director James B. Comey was such a tempestuous gesture that even the Russians must be gleeful over all the attention they’re now getting from Trump’s genius at manipulating the news. The world now believes that Russia is able to rig other nations’ elections. Trump may have thought he was deep-sixing the investigation(s)—there are three proceeding simultaneously—into Russia’s connection with his campaign, but he instead elongated the darkening shadow that is enveloping his nascent presidency. The Russia story will now drag on interminably, impeding the work of Congress, especially the expected messy confirmation hearings of Comey’s successor. And put aside thoughts of tax re-shuffle and the Obamacare overhaul indefinitely.

And on the very day after the Comey firing, Trump’s troubles doubled. So vigilant is Trump’s circle of sycophants that the Russians were able to sneak a photographer into the Oval Office under an assumed identity. Once inside, he photographed Trump meeting with Russian Foreign Minister Sergei Lavrov and Ambassador Sergey Kislyak at the peak of the rage over Comey’s firing for intensifying his investigation into Trump campaign connections with Russia. The pictures were immediately posted by TASS, the official Russian news agency, and picked up by American news outlets. And there was Trump, front and center, posing with the very people at the heart of the investigation, reinforcing the suspicion that something’s rotten in Washington and Moscow. (Trump’s disapproval rating is at 58 percent while his approval rating is down to 35 percent in the latest Quinnipiac poll.)

Trump tried to dump Comey’s firing on Rod J. Rosenstein, the former U.S. attorney for Maryland and newly installed deputy U.S. attorney general. Rosenstein threatened to quit rather than be the fall guy. Those who know Rosenstein also know better. Trump tricked Rosenstein into putting his thoughts in a memo concerning Comey’s handling of Hillary Clinton’s fumble-fingered email fiasco. Nowhere did Rosenstein mention firing Comey. Trump used Rosenstein’s memo as a prop to sack Comey who was getting more attention than he was—a “showboat” and a “grandstander” as Trump later characterized Comey. Trump said in his grammatically awkward cover letter to Comey: “I greatly appreciate you [sic] informing me, on three separate occasions, that I am not under investigation.” Those familiar with FBI procedures might mentally add the word “yet.”

The person who seemed most surprised by the backlash over Comey’s firing was Trump himself. He apparently had anticipated congratulatory backslaps for what he regarded as a demonstration of leadership and resolve. But, in fact, he was criticized, and even undercut, by many friends and GOP supporters, for the slapdash manner in which the decapitation was carried out. Even many in the upper echelons of his administration—notably his press office—were caught off guard and uninformed of the epic action in an awkward roundelay of contradictions. Trump has proposed eliminating press briefings to avoid such crosscurrents.

But no one was more surprised than Comey, who saw the announcement on television and thought it was a joke. But the joke was on him. Trump, in an interview with NBC’s Lester Holt three days later, admitted he intended to fire Comey all along and the Rosenstein memo was just was a convenient excuse, or another voice of support. By his own dim-witted action, Trump has unleashed an angered FBI, especially those pursuing the Russia connection, as a permanent source of leaks.

But Trump won’t let go. He’s threatened Comey with tape recordings of their White House dinner conversation. Trump had better listen first. Officials in Comey’s position have been known to carry “scramblers” that render such attempts as nothing but static. (Robert F. Kennedy, as attorney general, did exactly that to President Lyndon Johnson, who thought he had Kennedy on tape in a “gotcha” White House conversation.)

Democrats had better be careful what they wish for. They’re calling for, along with some Republicans, a medley of responses: (1) A special prosecutor; (2) A special commission; and (3) Impeachment.

A special prosecutor (as in the Watergate and Clinton investigations) would be appointed by the Justice Department, which is an executive branch agency and controlled by the president. This would, in effect, put the president in charge of his own investigation. Furthermore, the appointment of a special prosecutor would subsume the three investigations that are already underway—by the House, the Senate and the FBI. But Attorney General Jeff Sessions has recused himself from all matters involving Russia because of his own involvement. So, the appointment would fall to Rosenstein, his deputy, who has demonstrated his independence from the White House by threatening to resign.

The appointment of a special commission, such as the Warren Commission that investigated the assassination of President John F. Kennedy, would operate independent of both Congress and the Trump Administration. And finally, impeachment does not necessarily mean removal. At its most basic, impeachment means to accuse, which could lead to removal after a lengthy process resembling a trial. Only two presidents have been impeached, Bill Clinton and Andrew Johnson. Neither was convicted, and both served out their terms.

And now to catch up on healthcare. Trump’s ham-fisted handling of Comey’s sacking may be an event to rejoice in a perverse way. It will slow down, and delay interminably, the further deconstruction of Obamacare, if not kill the revision altogether in the Senate. The frustration of finding an equitable, workable alternative program is so complex that it could lead to the ultimate Democratic solution of reinventing the wheel—a single payer system, or, Medicare for all.

Maryland, for example, has 1284 million low-income adults and children enrolled in Medicaid and CHIP (Children’s Health Insurance Program), a joint state-federal program. Enrollment jumped to that number by 49.98 percent when state-run marketplaces opened in 2013 under the Obamacare expansion. Thirty-two states and the District of Columbia have chosen to join the Medicaid expansion program. The House-passed revision, re-born as Trumpcare, cuts funding for Medicaid and passes on the savings to offset a tax cut for the wealthy. It allows states to accept the option of a block grant, which many experts acknowledge will be insufficient to pay for current levels of Medicaid enrollees, dramatically increasing the number of uninsured. And estimated 14 million people could lose healthcare under the cutback.

This is not to suggest Hogan will apply for a waiver if the replacement program is adopted in its current form. But it does not excuse him from appointing Robert E. Moffit, a hard-edged think tank ideologue who opposes Obamacare, from contributing to the decision in a state where one in five people are on Medicaid.

It’s doubtful that a bigger story that Comey’s firing and its yet-untold ramifications will occur any time soon, though given Trump’s Twitter fingers and mercurial temperament anything’s possible. News never stops.