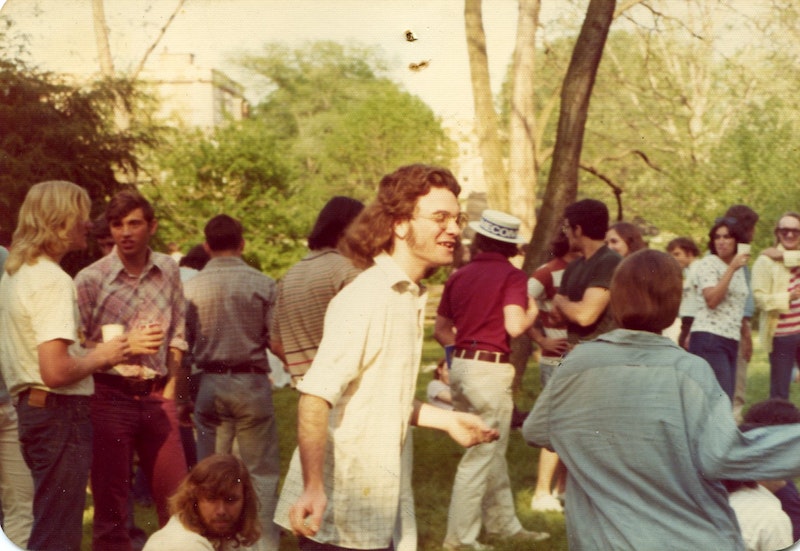 A couple of weeks ago, my son and I were driving past the Johns Hopkins campus on Charles St. and there was a reasonable crowd in front of the Eisenhower Library. I figured it was a pleasant day, and students were taking advantage of it, but later learned the annual Spring Fair was underway. I haven’t attended one of those fairs in years—it long ago became a generic festival, unlike the boisterous iterations in the early 1970s—but several hours later, as free association set in, I thought about an old classmate, buddy, and colleague at the Hopkins News-Letter who, in a gaggle of colorful and talented people I knew, really stood out. His name was D.H. Warren (pictured above, lost in his own hypnotic dance on a spring afternoon in 1975, probably to the music of Ocean Rose or Rodeo Rick), and though I’ve long since lost touch with D.H. my almost-daily interactions with him long ago are impossibly clear.

I don’t remember how I met D.H. (his first name is David, but always went with the initials, although he acquired the nickname Dotto, because when he wrote his name on an article he circled the periods between “D” and “H”), but it’s likely he sent an over-the-transom story to the paper in the fall of ’74—he was a year behind me—and as then-features editor of the twice-weekly paper, I followed up on the query, meeting him at his dorm. Born in Baltimore, he’d spent the previous 13 years living in New Orleans, a de facto Southerner, exotic enough at that time when JHU’s undergraduate student body was 2,000 and people who weren’t from the Northeast were rare, but his quick wit, and temper, were infectious. He was a devout Bowie disciple—pronouncing his name “Bough-ee,” rather than the more conventional “Bo-ee”—and was the first person I’d ever met who spoke at length about gender-bending. I’ve no idea if he dabbled in bisexuality—my manners always excluded probing a friend’s personal life—but he talked a good game, and was way ahead of the time on the gay rights issue. He was one of the original Young Dudes.

In any case, he continued to write stories during his freshman year, which were unusually clean for a writer his age, if sometimes overly precious and spacey. D.H. wasn’t much of a drinker, but he did like dope (I guess now an anachronistic term for pot) and kept us abreast of the ever-changing market. One day, before classes started in the fall of ’75, D.H. called an informal meeting at the Gatehouse (the exquisite cottage at the south end of the campus, across the street from Wyman Park that housed the News-Letter and for several years was my second apartment, cold shower and all), and, with customary flair, told the five or six of us, “Gentleman, the bad news is that the price of an ounce has skyrocketed to $35.”After the gasps, he continued, “the good news is that we’re done with the Mexican shit, and it’s now Colombian, baby!” I’d been to Amsterdam that summer and gave him a chillum I’d purchased there, which earned me a taste of this new strain of cannabis, up the ladder to my office, using “Mr. Bong” to get it all rolling.

It was a fabulous time for student journalists in general—on the heels of Woodward & Bernstein—and at Hopkins in particular because my longtime friend Joachim Blunck was co-chairman of the annual Milton S. Eisenhower Symposium, a weekly series of lectures, which 1975 was devoted to journalism. Which meant I was able to interview Andy Warhol for an hour at Cross Keys and Hunter S. Thompson, among others, which was pretty heady stuff. That December, in preparation for the second semester, I was elevated to editor-in-chief, and I tapped D.H. as features editor. Every Thursday night, as we prepared the Friday issue (which was a precursor to City Paper, which would begin in ’77), D.H., Eric Garland, and I would pull all-nighters, along with the paste-up artists and a terrific photographer by the name of David Porter. After the paper was completed, and driven out to Westminster, MD for printing, D.H. and I would often roam around the campus, and one Friday morning, around dawn, we smoked a joint by Gilman Hall, and he told me, “Russ, the trick of all this is simple: we’re running while the world’s asleep.”

D.H. was a splendid writer—although he often threatened to quit when I deleted a particularly purplish paragraph that he claimed was central to his story, and didn’t care who was listening when he screamed and screamed—and his finest effort—March 3, 1976—was a long (2,500 words) piece about his trip down to Mardi Gras. One brief excerpt, from his adventures with The Princess and The Philosopher: “I was heartened by the loud booing from the mob as a float bearing the head of Nixon in a Chinese setting rolled by. Our thumbs down, I reflected on the pagan origins of this now Catholic holiday and decided ancient Rome never died. The parade concluded with a local citizen and I agreeing that Jerry Ford had proved anybody could be President, as we watched several policemen handcuff and drag away a rather violent couple.”

After that school year concluded, I took a semester off before senior year, and went to work in Denver at an outfit called College Press Service. Returning that January, D.H. picked up the friendship, along with his live-in girlfriend Rhona. We took a Mythology class together, just two of six students that met at the professor’s apartment each Thursday at seven a.m., obviously the reason for the intimate size. Suited me, though, since the class met just once a week, required just one term paper, and, way behind in the necessary credits to graduate, was a life-saver. One morning, after class, D.H. and Rhona surprised us all, saying they were about to get married in a garden near the News-Letter office, with the late JHU chaplain Chester Wickwire performing the ceremony. Several of us bore witness—still dumbfounded, but that was D.H.—and after Dr. Wickwire concluded his brief recitation of vows, we had a plastic cup apiece of some cheap champagne to toast the couple.

D.H. chose to pursue a career in academic-oriented endeavors, and currently lives in St. Louis. He never wrote, to my chagrin, for City Paper or New York Press, but in the 1990s, when email was introduced we did correspond occasionally. Had he chosen to pursue journalism (and inevitably, book-writing), I’m certain he’d have been a star, although given the industry’s current decrepit condition, one could argue he made the right decision.