What a Kazoo Fest This Is

Fiction: He did something nasty with his term paper. 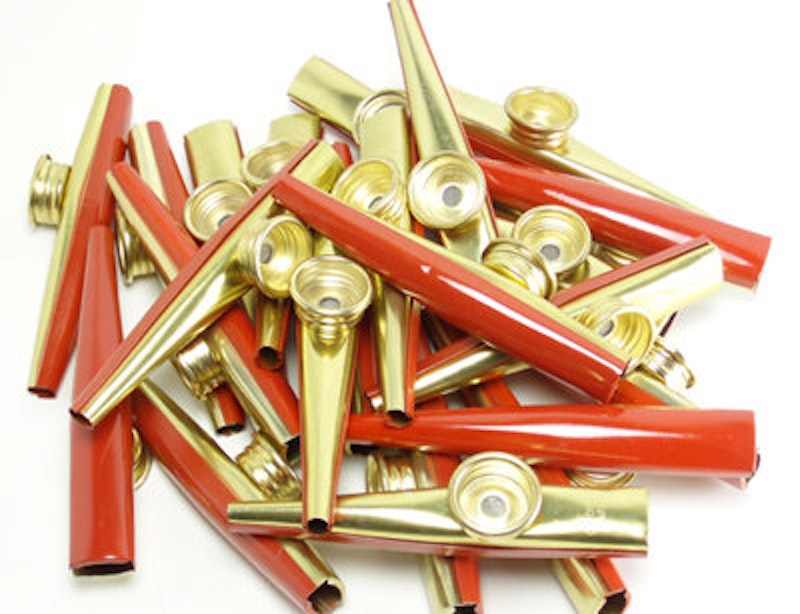 “What a kazoo fest this is,” my roommate used to say. Suitemate, I mean. We weren't in the same room. I don't think I could’ve taken it, and was kind of relieved when the college kicked him out at the end of first semester. They got him because of how he delivered a term paper in his Russian Modernism class. Instead of using staplers, he'd glued them. He wadded the corners of the pages and pasted them together with something that was most likely rubber cement, maybe airplane glue. But he told his t.a. that he’d masturbated and used that to smear them together. So the school had to kick him out—because, you know, just saying that. I don't know if they kept it off his record; his family had lawyers, because they were on the phone the afternoon the school came down on him. But I didn't keep up with events afterward.

He was a mouthy guy. I guess we all were, but with some it worked better than others. “What a kazoo fest.” I mean, you don't try to start something. You could see he was trying to start that phrase, and that got on my nerves—the outlook it revealed.

He didn't use the phrase once when he told us about it. He sat down on the couch and gave us the whole story. Being mad about her requirements for the paper, not having any staples, being up really late and high and deciding, okay, hand in the paper like that, any way you can do the job. And then how, when it was time for his conference, he looked at her across the table and thought, “I'm not going to hide my thoughts for you.”

The t.a. pointed at the corner of the paper and said, with a pretty wrinkle to her nose, “This is a bit unexpected.”  And he said… Well, he never gave the exact words. “So I told her,” he said, and that made the point. Now he was back from a visit with a dean and he was waiting for his parents' lawyer to call.

It's fine with me that he didn't come up with some crusher of a line to drop on her head. He was the sort who’d really like to have a line like that. But apparently he didn't think of one.

Don't ask me how he got into a Russian Modernism class when he was a freshman. I guess he was smart. We all thought we were smart, and we were. Maybe he had a letter from a poet friend of his parents, or something like that. Anyway I never knew him to display any uncertainty about Russian Modernism. He did have some uncertainty about the t.a., whom he considered a kind of wily, fathomless adversary. When he talked about her, he was on edge.

Nobody in our suite really missed him after he got kicked out. I noticed that in January or so, and it made me feel good. Everybody had found him the same kind of irritating that I did, a fact that emerged in conversations here and there. He was always trying to be special and to have special moments. He'd say “Isn't this great!” and he'd tell long stories that had to wow you if they were going to be any good, so everybody in the room had to act up psyched up just to spare him embarrassment.

I mean, we were all noisy, mouthy kids. But we weren't angling for anything. But he'd try to start phrases. “What a kazoo fest!” What was he looking for with that?

Toward the end of freshman year, into the spring, I saw the t.a. This was at the Comp Lit department. I was handing in a paper, meaning I furled it up and slid it into a grad student's mail box a day late. Next to me was a woman with black hair and heavy cheekbones. “Marta,” the lady at the desk called her. The t.a.'s name was Marta. I stepped back and watched her go. She was pretty; I caught a glimpse of violet eyes over doorknob cheekbones, and her dark hair looked like something expensive.

She had breasts too, but her body was built low and boxlike. Solid and serene was how she came across, but not attractively shaped. Marta talked a bit with the lady at the desk, one hand holding a new issue of a journal (the title was Something Something Studies, with “Petersburg” in there someplace). I was out the door as they discussed the flies in the coffee room and the measures taken against them.

I walked 60 steps or so. By the time I was near the bike racks, a thought occurred to me. My feet stopped. I felt like months and months of facts had suddenly kicked themselves into a new arrangement. My life over these months had been a little different than I thought.

Here's how it worked. The t.a. had seen my roommate when she was sitting down. Mainly. At a table in the seminar room or across her desk in her office. When the t.a. was talking, she was sitting down. That's when she was at her most important, being the teacher, and also when she was at her best-looking. See her across a table and you were really looking at something, and there she was telling you how you didn't properly understand Notes from Underground.

My roommate, the dumbass, turned her into an icon of sorts, something he was always wrapping his thoughts around. He kept dropping her name, like somebody with a crush. He got himself wrapped around her. All right.

My view on seeing her, and I've got to be honest, is that this was a case of mistaken identity. Whether or not she'd been hostile to him (which I didn't know), she did not belong in the role of beautiful destroyer because, in the opinion of my roommate and myself and everyone in our suite, she was only half-beautiful, and the less important half. That's what brought home for me how my roommate had head-whipped himself: Look at her beneath the table and she wasn't so much.

Now, the thing is, when I thought of how my roomie had managed to get past those boxy legs and fool himself with an image, I thought about us, his roommates in the suite. When I did so, I realized exactly one small thing, but somehow it slid the ground beneath my feet. All this time I'd taken it for granted that the ex-roommate had been trying to impress us. He made noise, made jokes, because everybody wants a response. His problem was how he tried, how he angled and pounced, and therefore overdid it and was a drag. But of course he wanted to impress us. In fact we considered ourselves pretty impressive. We were the bunch with the good SATs.

But maybe this was a case of mistaken identity too. Yes, he’d wrapped himself around the half-beautiful t.a. like a ball of yarn around a stump. And maybe we were by way of being stumps too, at least for my roommate's purposes. Maybe it made no difference what we were like, he would have been running himself ragged, chasing the same prize: somebody, anybody, saying he was smart and right.

My place in events shrank down a size or two. That's the effect as I describe it, what hit me there near the bike racks. I was still standing and didn't hurt much, but I felt like I had taken a sounding and discovered something unwieldy and deep about lived reality. That's all. I can't claim the episode made me spiritual. It was just one of those milestones you bump into when young.

My God, I thought, the things people get up to! They milled in my brain, a trail of white clear-limbed beings with shoes and top hats and beards and bonnets, a flowing tangle of creatures that added up to humanity as it lived on this earth, nobody resting and nobody aware of what they were actually doing.

Against my will, I said, “What a kazoo fest.”

I talked about this moment years later, about the little milestone, and my wife said in counseling it was one of the reasons she thought she and I shouldn't stay together. Beats me.