My Cat Is Indifferent to His Exercise Wheel

But I'm not giving up. 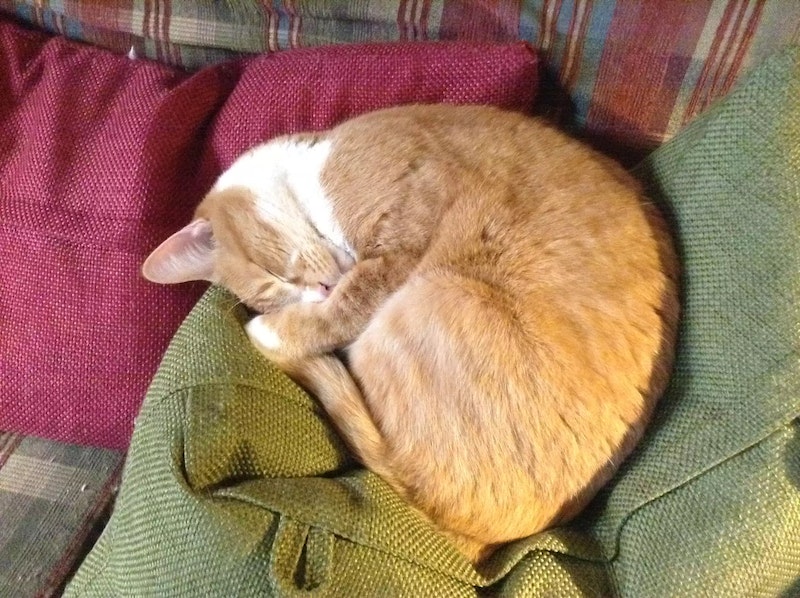 Max is an indoor cat. My wife and I live on a busy street, so it’d be dangerous to allow him to roam freely. Plus, I'd rather he not terrorize the local wildlife. Ignoring odd looks from neighbors and passerby, I take him for leashed walks in the backyard. Still, our veterinarian recommends I monitor Max's weight, as he's a little portly. A little over a year ago, I thought I found the solution—a gigantic exercise wheel.

I'm not sure where I first saw the advertisement for One Fast Cat, but I was enthralled by the demonstration video. In the brief clip, set to classical music, a slim tabby gracefully steps onto the wheel, walked tentatively, and eventually starts running at a brisk pace. I could imagine Max doing the same, shedding fat and the excess energy, which made him, torment my wife, especially in winter months.

The only problem was the price: $200. Money was tight in our house, as it frequently is. I had to wait until I got a large chunk of change. Finally, it came. My Kickstarter campaign to publish the biography of Ronnie Lee, founder of the Animal Liberation Front, was successfully funded. And, as a result, I got a significant influx of cash—a portion of which I used to buy Max his wheel.

When it finally arrived, I dragged the large box into the basement. My wife had nixed the idea of keeping the wheel in our living room. I thought the black circle was aesthetically pleasing, but to be fair, there was already a cat tower in the space. So I constructed it downstairs. Max hovered nearby, only to skitter away when I hammered the pieces into place.

Cooing encouragement, I gingerly placed Max on the wheel. He wobbled a bit and quickly stepped off the unstable surface. I tried again and again, but it was clear he didn't like it. I enticed him with a toy, and got him to take a few steps. I recorded his progress and emailed the video to our extended family. I found Max was more motivated by food, so I switched the toy for a spoonful of flesh.

But we never made further headway. Max would walk some and occasionally break into a jog, but nothing more. He certainly wouldn't use the wheel without food or a toy. So I gave up. The wheel sits unused in our basement. Thankfully, Max's weight has stabilized, since we put his meals in a Trixie food puzzle and only allow him access during certain hours of the day.

I could probably sell the wheel, and recoup some of our expense. But I don't want to. I hold out hope that the next cat we adopt will take to it more. After all, Max is very comfortable walking in a harness, on a leash—partly, I imagine, because he did this from a young age. Maybe the same will prove true for using the One Fast Cat product. Meanwhile, I'm constantly on the lookout for new ways to keep Max happy and healthy.