Don’t exaggerate the significance of another baseball season. 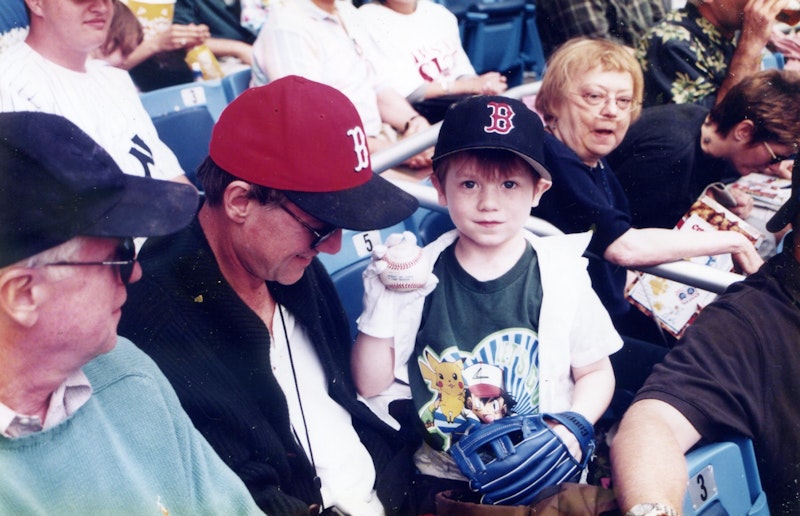 I haven’t the sportswriting skills of my friend, and onetime New York Press colleague, Spike Vrusho but as I read several Opening Day articles in the past week, here’s one certainty: baseball and politics are worlds apart. On Monday, before skipping off from work early to watch the Red Sox—the only team in professional sports I root for—begin their season at Fenway against the Pirates, I looked at Michael Brendan Dougherty’s The Week piece and just harrumphed. Dougherty, who runs the excellent Slurve website, an inexpensive ($36 annually) aggregator of baseball links that’s emailed to subscribers every morning during the season, begins: “Baseball could not have returned at a more propitious moment for the American psyche… Here is a kind of refuge from what America looks like on our screens. Here are older rivalries that enliven, not enervate, our spirits.”

Pardon the heresy, but not all Americans are seething/defending Donald Trump every waking hour of the day. Yes, it’s a strange political environment today, and while Trump’s upped the ante for sheer weirdness, Dougherty’s lead sentence could be written at the start of every single season. (Or near the end: after 9/11 there was a lot of breathless coverage that the exciting Yanks/Diamondbacks World Series helped “heal” the country. Which was baloney: it was a fleeting diversion.) That’s not to say some baseball players (or former stars) don’t have political opinions—a Curt Schilling here, an Adam Jones there—but mostly the sport is a Beltway-free zone.

At least for me, the start of the 2017 season isn’t a “refuge,” but rather a resumption of a routine that’s by turns exhilarating and agonizing. Unlike purists, I don’t marvel at the majesty of a well-turned double play, call outfielders “warriors,” feel the loss of Vin Scully from the Dodgers’ broadcasting booth, or relive last year’s historic Game Seven of the World Series. I did watch the Cubs prevail over the Indians in a very odd and compelling game, and then moved on a half hour later.

Ever since I was a kid baseball meant just two things: the Red Sox rule and the Yankees suck. It’s that simple, and if that appears narrow-minded, hard cheese. As I’ve grown older, I pay even more attention to the Sox—the cable Extra Innings package, where every game is available during the season, an unimaginable luxury just two decades ago, allows me to see all the Sox games I want—undoubtedly because at 61 I’m no longer a nightlife cool cat and go about my days in a very ordered way. In 1975, for example, I saw the Carlton Fisk Game Six of the Sox/Big Red Machine World Series at a bar on Johns Hopkins campus, and whooped it up along with the predominantly Boston partisans. The Sox didn’t prevail that year (I saw part of the last game at a friend’s apartment, a good fellow, who, not half a year later heard the CIA talking to him through the fillings in his mouth and was carted off to a local Crackerbox Palace), and wouldn’t until 2004—I’ll have no words on the ’86 debacle—but I was 20, having a ball in college, and it didn’t matter as much.

My longtime friend Rick, a few years older than me, is like-minded. In the 1990s, as neighbors in Tribeca, we’d see each other often—our kids’ Little League games, bumping into one another at the bodega, the park, meals out—and blab and blab about the Sox. Now, living in different cities, we text during games, almost non-stop. On Monday, our stomachs flipped as the Sox barely held on to a 5-3 lead over the Pirates, when Boston’s bullpen, its Achilles' Heel this season, almost coughed up the game after starter Rick Porcello pitched well and rookie Andrew Benintendi hit a three-run homer in the fifth. With a 5-0 lead heading into the seventh, and Porcello tiring, Rick texted: “Who’s going to blow the game?” I replied, “Take your pick, but probably Kimbrel.”

When the Sox closer gave up a double to start the ninth, we both turned gloomy, knowing that a loss would put a damper on the day. It’s torture watching Kimbrel, once an elite reliever, try to throw strikes. Also, he takes about a minute between pitches—unlike Koji Uehara in his prime years with Boston, who was so efficient we got spoiled—time enough to swig a bottle of Pepto. Anyway, after that double, we agreed Opening Day was lost, but when Kimbrel miraculously came through, Rick wrote back, “Never in doubt!”

I’ve no idea whether the Sox will win 82 or 92 games. Not having Big Papi sucks, Pablo Sandoval still looks like he eats a horse for breakfast, Mitch Moreland’s a stiff, David Price probably won’t pitch until July, and Joe Kelly will never pan out. On the plus side, there’s Mookie Betts, Benintendi, Xander Bogaerts, Jackie Bradley Jr.—the best Sox center fielder I’ve ever seen—and, as always, Dustin Pedroia. I’m writing just hours before Chris Sale makes his Sox debut and just hope Kimbrel (or Matt Barnes, Robbie Ross, or Heath Hembree) doesn’t leave him in the lurch.