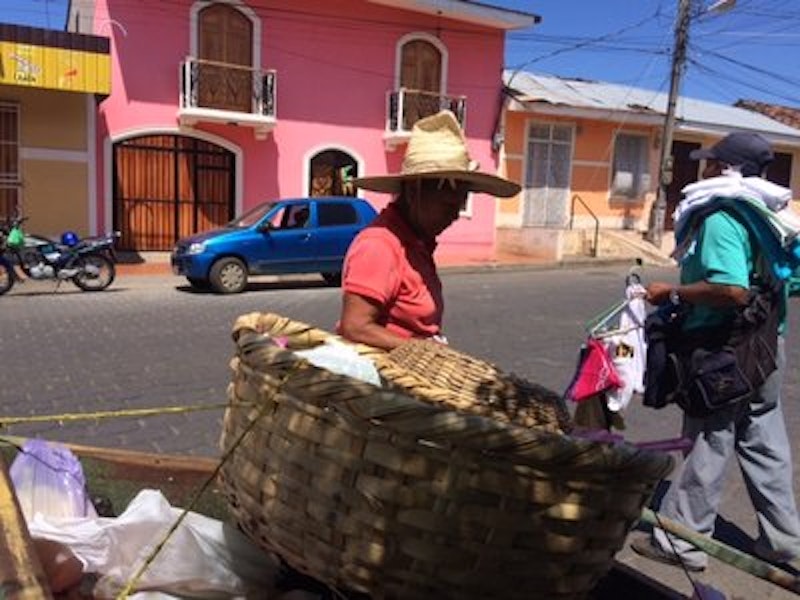 I visited Nicaragua last month. When I mention this to friends, they all ask, “Why?” Unfortunately, Nicaragua has an image problem it can’t shake. The last time the world paid it any mind was when the country was mired in a decade-long bloody civil war. That was 25 years ago.

Today, Nicaragua is the safest country in Central America. It’s uniquely laid-back. I went to Granada, a quaint town where people are friendly, though no one speaks English. The town has a bustling feel, but when I paid close attention, the underfed dogs and horses that share the central plaza disheartened me.

We stayed at a small and inexpensive guest house in town and walked everywhere. I talked to the local single mother of three who managed the house. She told me about her struggle to get by on her $320/year salary. She has to deal with a barely funded public education system for her children. Most Nicaraguans earn $1 to $2 per day. I visited a school in the middle of town that looked more like an outdoor area with spaces divided, like stalls in a barn. I brought along notebooks and colored markers and the young children were thrilled to have their pictures taken on my iPhone.

As I traveled south along the coast, my heartstrings were tugged. The rate of poverty can reach up to 60 percent. If you look closely into the shrouded jungle, you can see shabby metal and plastic huts with dirt floors. The poverty often drives children out of school and into the streets to beg for money or child labor. I bought a beautifully handmade hammock, which I didn’t need or want, from a small boy who appeared to be no more than seven. He followed me down the street lowering his price with each step. His persistence paid off when $4 was his.

Although President Ortega has stabilized the unrest and lowered crime rates, the fiercely political Nicaraguans I spoke with feel their president is getting richer while the people starve. He has tight control over elections, Congress, the military and the courts. His friends and allies control fuel companies, television stations and the public construction projects. He was widely criticized for constitutional changes he made repealing term limits, allowing him to run in 2016 for a third consecutive term. The locals are tired of seeing people in the hierarchy bringing in luxury cars and buying $500,000 homes with cash. There’s a new social class forming despite Nicaragua being the second poorest country in the Western Hemisphere. The local driver who took me to the airport asked me what I thought of Dictator Trump. It took me off guard, but the Nicaraguan storyline did sound familiar.

Despite the country’s inequality and precarious economy, people flock to visit. Tourism through surfing on undiscovered beaches, shopping colonial markets and hiking volcanoes are now giving Nicaragua a new shot of hope that it may become a new vacation destination and business investment. Is Nicaragua the new Costa Rica? Maybe, but rebels, I’m told, still fight in the northern mountains and set ambushes against Ortega’s government, longing for the days when the U.S. government supported them.