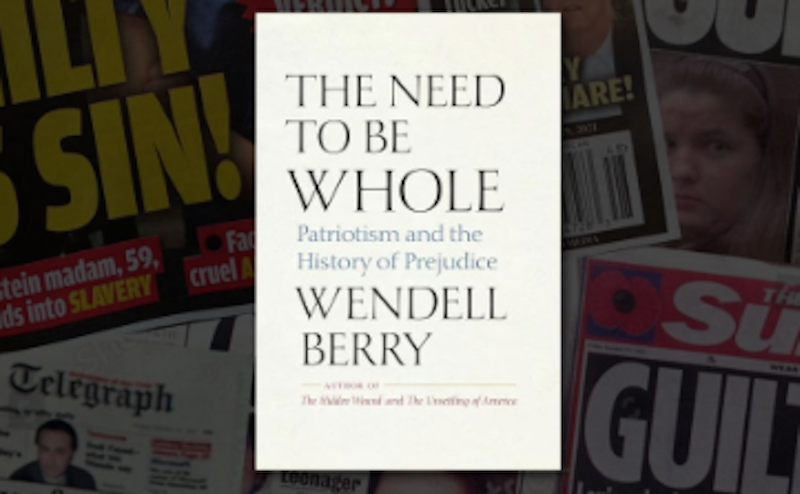 Wendell Berry has written across the spectrum—poetry, fiction and essays—always concerned with the lives of rural Kentuckians, and rural people everywhere. He returns with The Need To Be Whole: Patriotism and the History of Prejudice (Shoemaker & Company), in which he combines memoir with scholarly research in an effort to understand racism in America.

Berry’s politics may seem confusing to many readers of the center: he has no love for either political party, since both support policies such as open pit mining and corporate farming. He’s a Christian, has been arrested for protesting nuclear power, and is anti-war and anti-interventionist. The Need To Be Whole is a response to national headline events of the last 10 years or so, including police shootings of innocent black people, the sometimes violent protests in response to them, writers such as Ta-Nehisi Coates’ call for reparations, the tearing down of Confederate Civil War hero statues, and the election of Donald Trump. These are subjects some might say an old white man has no business talking about. It’s these people, though, whom Berry’s trying to engage, because to talk about race in America necessarily, according to him, involves talking about class, poor whites, and the rural/urban divide.

There may be some eye-rolling at early sections of The Need To Be Whole, in which Berry recounts memories of black people he grew up with, and confronts the history of slavery in Kentucky, and his own family. Doing so might come across as an attempt at the “some of my best friends are black” excuse. But Berry’s memories and family history build to a sense of loss, since he’s showing how black people used to make up a much larger portion of rural residents, including farmers. He later backs this idea with numbers and research, but reminds us (again with numbers) that rural white farmers have been just as decimated, as factory farming has pushed both demographics into the cities, where they now work for someone else, instead of for themselves, and lose a sense of belonging.

Berry has a different sense of what patriotism is, or means, to most Americans. The American-flag-waving crowd—including those rooting for Nazis in Ukraine—he’d call nationalists. For Berry, patriotism is loyalty to the land that one grew up in, and he uses the work of historians to show how important this type of patriotism was to southerners during our Civil War. Here Berry quotes historian Shelby Foote: “According to [the Census of 1860], the southern population was nine million, the northern twenty million… White males between the ages of fifteen and forty numbered 1,140,000 in the South, compared to 4,070,000 in the North.”

Berry quotes another historian, Page Smith: “More than 2,000,000 soldiers and sailors served in the Union forces and some 600,000 fought for the Confederacy.” Meaning when the North declared war on the South, Northern forces outnumbered Southern forces by a little over three-one.

Berry: “To know that the South held out for four years, winning some major victories, against such odds is to begin a significant detraction from the idea that the war was about slavery only, or even that it was only about slavery and states’ rights. There can be no doubt that the primary cause of the Civil War was slavery. We have the testimony of John Quincy Adam’s Diary that forty years before the war the Union was already irreconcilably divided over the issue of slavery, so much so that Adams foresaw that the consequence would be tragic. But from the point of view of the Confederate soldiers, the great fact of the war, once it had begun, was that their country had been, and was going to be, invaded. They shared with [General Robert E.] Lee a settled determination to defend their homelands and their people.”

Again, by homeland Berry means the land people lived on—maybe as big as a state, as in to be a Kentuckian—but more reasonably like a river drainage area. Different from the Nazi-like use of homeland in The Department of Homeland Security, which sounds like an organization to police one’s own people. And is.

Berry gives much space in his book to General Robert E. Lee, who didn’t own slaves (as Berry points out, most people in the South didn’t). This is again touchy territory for some readers, but Berry is pushing back against the idea that every person in the South was (and is) racist, and that the statues of Confederate heroes like Lee toppled some years back meant more, to some people in the South, than just slavery. A touchy subject, but this is the most engaging part of the book.

There are other sections like this, which could work as separate essays, like ”On Education,” in which Berry goes on a humorous rant, hinting at solutions, taking digs some centrist holy cows, and harkening back to his most famous poem, “Manifesto: The Mad Farmer Liberation Front.” At this point in The Need To Be Whole, Berry is tying in urban America’s treatment, and disgust, of rural people (black and white) with its push towards factory farming.

Berry: “If I seem to have been invoking our worn and almost compulsory belief that ‘education’ or ‘better education’ is the solution to every problem, then I need to make a correction. If education is the solution, that obviously prolongs the problem until later, which some find convenient. But I have no faith in the capacity of what we now call education to prevent or cure, even in the future, a national stupidity, particularly if the stupidity in question—that we can survive by wasting everything necessary for our survival—is scientifically accredited and publicly approved. I doubt that a required public school course in land stewardship would weigh effectively against “cheap food” as a fact of life or the belief that farmwork is degrading and farmers degraded...

“Though it seems unlikely to me that public schools, obligated as they are to please everybody, could effectively teach land stewardship, I can think of projects, best undertaken in schools, that would be materially useful to the human commonwealth. I would make these university projects, for I do believe somewhat in the trickledown theory of education, if by education we mean the lived life and the pursuit of truth...

“The focus would be upon actual problems of the present, and actual (past or present) solutions. There would be no more boundaries among “departments.” All knowledge, all acknowledged ignorance, all questions would be brought to bear. There would be no more administrators than absolutely necessary. They would be paid no more than the teachers. Janitors and other maintenance workers would be paid as much as the teachers. Anybody with useful knowledge could teach. Anybody ignorant and curious could be a student. All the now-recognized disciplines and specialties would be needed so long as they proved useful to the curriculum of unavoidable questions and the search for answers. The ruling and ordering question would be: How can human beings live on and from any specified place on earth without diminishing its life and their own?”

I'd consider going back to teaching if it could be at a school like that. Reading Wendell Berry makes me fantasize about becoming a farmer, even though I have no experience and at 53, don’t have enough time left in my life to learn how. He’s written before that he’s not trying to convert everyone to farming, though I think he’d be proud if he did. I’m sure he has. What he’s doing is sharing the beauty of rural life, and my fantasy involves more the feelings of happiness and satisfaction one gets about his life, from his writing: working with the hands and body, to produce food for oneself and for others. And, he models, to still think and write and do good hard work with the mind as well. And that everybody—black and white and brown—could, or should, be able to have that life.