The idea of “mining” vapor, of encouraging investors to use real money to buy play money, is why SBF’s company is bankrupt and his word worthless. 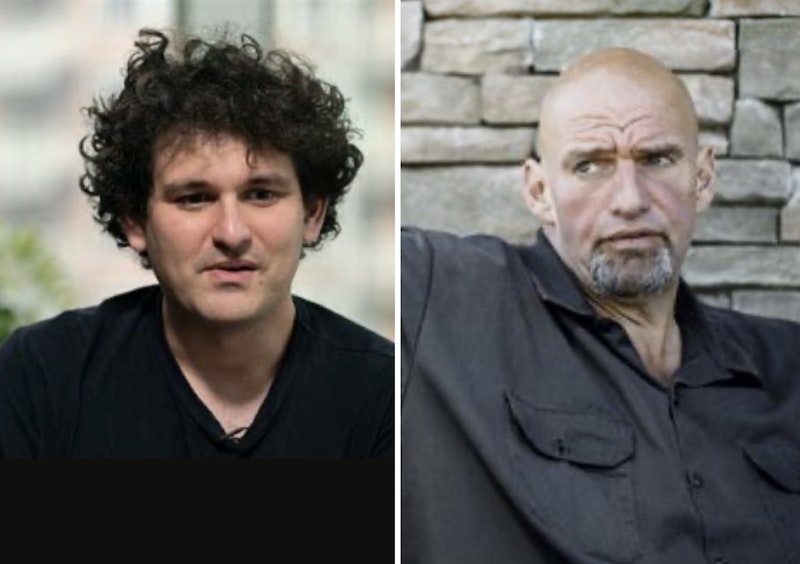 Consider the button, the nemesis of the allegedly competent and the suspiciously corrupt. Consider how John Fetterman and Sam Bankman-Fried (SBF) handle buttons, the plastic and pearlescent coins—the Roosevelt dimes—of a dead currency. Consider SBF first, a little man with a once-big fortune, who looks like he sleeps in his clothes; and then consider Fetterman, a big man with a newfound political fortune, who looks like he never changes his clothes. Consider the two together, minus budget for hair and makeup, where the Hulk’s new clothes have no buttons.

Key to this story is the absence of keyholes, as these slits—the thread-finished buttonholes on a shirt—do not suit SBF or fit Fetterman; as a men’s shirt fits SBF like a nightshirt, while any shirt with buttons must be a nightmare for Fetterman to wear.

No suit also for SBF, except when testifying before the Senate, and no fine silk or cotton for Senator-elect Fetterman, just piles of laundry—sheets of white industrial paper—with pink, yellow, and blue dots. No dress shirts for the gentleman from Pennsylvania, just rolls of candy buttons that smell like cherry, lemon, and lime.

No more performances by SBF, where he plays a diminutive physicist with uncombable hair, or words from Fetterman without an organist and title cards.

No more words from SBF, who has a degree from MIT and no evidence of an education, as his acts betray the spirit of the “mind and hand”; as his acts not only violate the law of conscience, but also do violence to the law of conservation of energy: creating the idea of something from nothing.

The idea of “mining” vapor, of encouraging investors to use real money to buy play money, is why SBF’s company is bankrupt and his word worthless.

The idea that the second-largest individual donor to the Democratic Party may be a bad person, that his act is over, doesn’t mean Democrats will return more than a token (indeed) of SBF’s $39.8 million.

The idea that John Fetterman will renounce SBF’s support, that he will be the voice of the conscience of the Senate and stand as a profile in courage, is unspeakable.

The idea that Fetterman will speak for the working class and take the battle to those whose hands mold the minds of the ruling class is improbable.

Better for us to ask Joseph Bankman and Barbara Fried what no one at Stanford Law School dare say, “Are you proud of your eldest son?”

Since Professor Bankman is also a clinical psychologist and the coauthor of a paper on ways to reduce tax evasion, we should question his assertions about taxes and morality.

He says, “Tax scholars generally have backgrounds in law, accounting or economics, while appeals to morality fall more squarely in the domains of psychology, literature, rhetoric or advertising.”

Does Bankman believe Americans should do as American Express says, or “Be Like Mike” and “Just Do It”?

Does he believe the copywriter is the copyist of scripture and the art director the arbiter of justice?

Does he believe the screen is a confessional, or a medium for father and son, where penance is optional and absolution guaranteed?

Regardless of what he believes, shrouds have no pockets—or buttons—and worldly wealth has no power in the world to come.