Navigating a first game of chess with my teenage son on the lake. 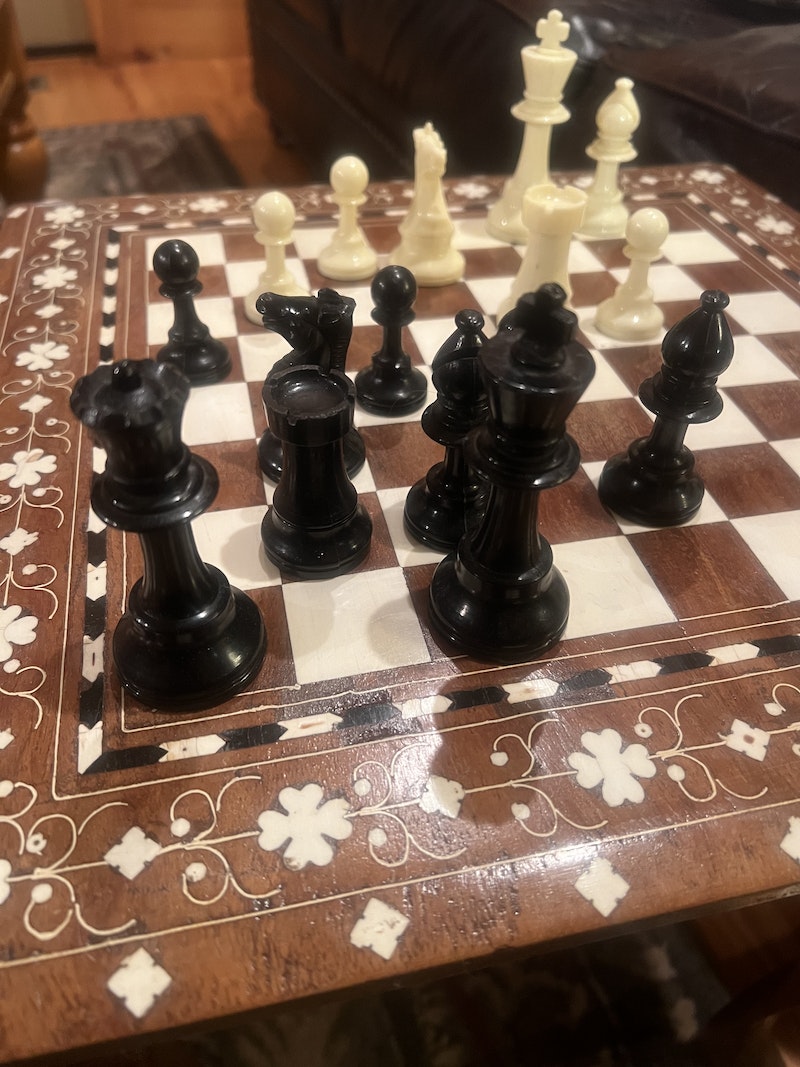 We rented a cabin on a Virginia lake for Thanksgiving. Today, ignoring the usual Black Friday shopping in lieu of bridal salon appointments, I’m buying a wedding gown for my middle daughter who’ll finish veterinary school at Virginia Tech in May and be married next September, so we came down to Appalashenadoah to spend the family holiday together.

While we were getting settled in on Wednesday, some family members were running around picking up items (bourbon, Cool Whip, etc.) at the store and I ended up at the cabin with my 17-year-old son Bobby. There’s no Wi-Fi here, just lots of magazines, board games (later that night a slightly drunken and hilarious round of Scattergories took place), and gorgeous views of the mountains and lake.

There’s also a beautiful chess table. Bobby asked if I wanted to play. In 53 years, I’ve never played a game of chess. I asked how he knew the game, he said he had “played it with some friends.” Normally his sports are basketball and baseball, so I was a bit surprised to learn he was aware of the complicated rules. I tried Googling, but with one bar of phone service, it was nearly impossible—the beginner section of chess.com came up but I couldn’t get much to load. I was on my own.

I was also now in the interesting predicament of allowing a 17-year-old with questionable chess experience to teach the game to his mother. But what the heck—in a world where I barely get quality time with this kid, I was more than willing to play along.

We set up the board. What little I’d been able to briefly scroll on chess.com before giving up had only intimidated me—each piece has different powers and the ability to move in different ways to different places on the board? The hell? I was suddenly longing for the checkers board I’d seen up in the kids’ loft.

Bobby looked like a young lion in the woods with an injured deer in front of him at lunchtime. The best part was how he acted like he was “helping” me. “Good move, Mom,” he’d say while “teaching” me that now his “horse” was going to eliminate my “flame dude.” I didn’t even learn what the names of the pieces were until later that night when other family members came back. “The bishop?” I said. “Which one was that?!” And the “castle guy” apparently is known as the “rook,” I later learned.

Apparently when you’re 17, you also feel facing the “horses” (now I know: knights) in the direction of your opponent is an intimidation tactic perhaps not otherwise used in the game. Despite much cursing, since I’m from Philadelphia a trashy Broad Street Bullies mentality was applied to the game (“back your fucking horse up! My queen is chilling over here stop being so goddamn aggressive with your castle dude this isn’t a motherfucking contact sport!”) we had a blast. I probably don’t need to tell you Bobby won, but it was after a thoughtful and strategic game on both our parts. Mostly his..

I’ve no idea what percentage of the game was played based on its rules and can’t look it up until we get back to Wi-Fi and humankind. But I don’t care. I’ll always remember this trip as the time my teenager “taught” his mother chess.