We're Going to Survive Together

Now's when we fight fascism. 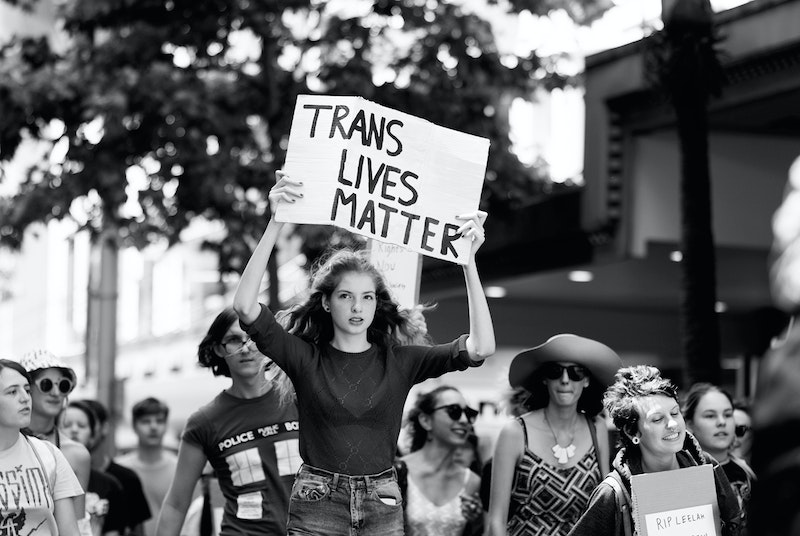 I've been a girl for a year this week.

That's a gross oversimplification, of course, but in one sense that's how I felt this Wednesday—my one-year anniversary of starting hormone replacement therapy. After 52 weeks of popping little blue and off-white pills, my body fat distribution has shifted radically, my hairline has improved (thanks, finasteride), and—perhaps most importantly—two wonderful, homegrown B-cups sit upon my chest as evidence of my journey. And there's still more in store.

While on HRT, I've attempted to zero in on how I'm feeling in my body. Many trans people have reported physical euphoria or a visceral sense of being more grounded and aware of each passing moment—a restoration of clarity. I'm not convinced this has been true for me, but when I had coffee a couple of months ago with a friend from high school (who, coincidentally, just came out as trans herself), she told me I looked more present than I had back in the day.

Perhaps that just comes from confidence, though. In publicly embracing my feminine identity, I unwittingly signed up for a life that requires me to reaffirm my legitimacy every day—whether that affirmation is directed at society or my own sense of inadequacy and dysphoria. There are still days when I can't stand to go outside and allow others to see me, but the gaps between those days grow wider the longer I spend in transition. HRT has helped me more than I ever dreamed, but just as vital to my growth as a woman has been practice. I'm not talking about drilling a new method of walking into my hips in order to pass; rather, I recognize that my newfound satisfaction with my identity has come through constant effort.

But I can't deny that HRT has had tangible mental effects. Before transitioning, I was often hard-pressed to remember what my face looked like without consulting a mirror. Maybe it's the number of selfies I take these days, but not only can I call my face to mind on command, I'm actually happy when that image bubbles up—something I certainly couldn't say before HRT. So maybe I was always a girl after all.

When I look back on 2016, I'm torn. Because this is the year that I became myself, but it's also the year that Donald Trump managed to squeak into the White House by virtue of a razor-thin series of victories in the Electoral College. 2016 is the year I entered a deeply difficult-but-rewarding romance with another trans girl, but it's also one that saw a rash of new laws introduced around the United States that sought to deny our human and civil rights. In 2016, I saw my writing career finally begin to grow while watching the news for endless reports of murdered trans women whose voices would never again be heard. Just this week, I heard stories of trans women of color shot to death and attacked with a hatchet, while a mother sought to sue her emancipated trans daughter for seeking gender reassignment surgery.

It's hard not to feel guilty that my empowerment has come at a time of great injustice against my siblings (or, in my more karmic moments of self-castigation, that it's caused that injustice).

This will be my final weekly column for Splice Today; I'm shifting focus a bit to spend more time on direct activism and community building in the face of fascism. But I thought it appropriate to end here—on the highest note I could possibly have imagined more than a year ago, as I stood in front of my bathroom mirror, suddenly ready to face my future as a girl. As a woman.

If this column has inspired you to think differently about trans issues or just provided a nice distraction on Fridays, I'm glad. If my diatribes against cissexism have annoyed or enraged you, I'm extra glad. And if you're trans and reading this, remember: I see you. I love you. We're going to survive together.