We’re All Going to Die

Cluster complicated migraines suck, but they are also an early indicator of stroke. 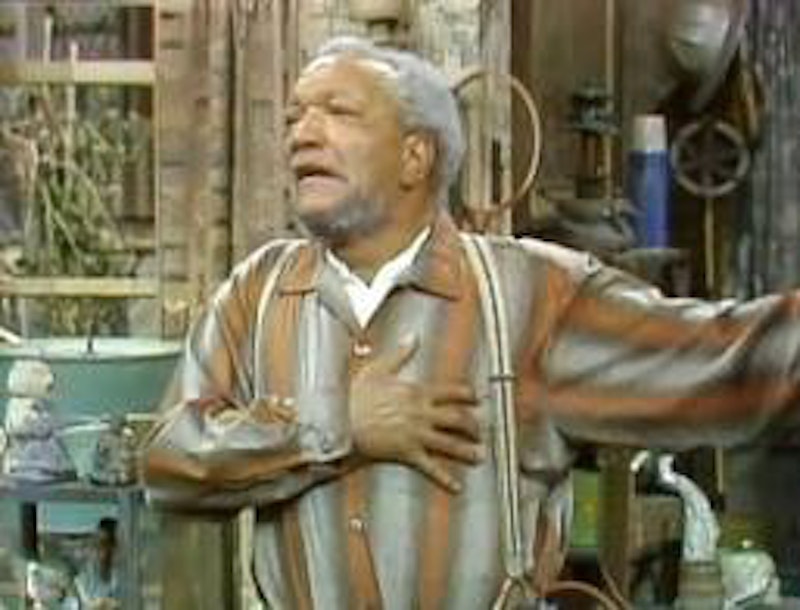 I know how I am going to die.

I don’t mean to go all Sixth-Sense weird and emo/macabre here, but I feel like I know how my life is going to end. I’ll be quite surprised if I end up getting hit by a DC Metro train, die a slow painful death of cancer, or have my brain eaten in the zombie apocalypse.

It’s about my grandmother. Eleanor was one of my favorite people. She smoked cigarettes, drank Scotch, watched Young and the Restless, and played Bingo and cards. She lived in the same apartment complex I did, so I’d leave my boring Catholic no-soap-operas-allowed place and go over to her party shack where she’d let me do all the things she did, minus the cigarettes, and with only the little bit left in the Scotch with the melting ice when I brought it to the sink. She wasn’t a drunk, but she was just buzzed enough to cheat at double solitaire so that she always beat me. She had big poufy old-lady Jersey hair, tons of blue eye shadow, and a closet full of polyester.

Anyway, she died of a stroke and now she’s this completely cool guardian angel who hooks me up with stuff from upstairs. Anytime something good happens to me, I sort of glance at the sky and say, “Thanks, Nanny.” I believe the reason she is doing this nice stuff is that she also left with me with her die-young-of-a-stroke gene. The other night, I had the second mini-stroke event in my life so far.

The first was in 1998 when I was seven months pregnant with my second daughter. I’d been plagued with complicated migraines (which means you lose your vision and/or your ability to speak) since 1993 during my first pregnancy. I was in an elevator and my vision started to go: a starry field takes over your eyes until you can’t see anything. I tried to talk to my husband to tell him what was going on, but the words all came out of my mouth in the wrong order, and finally, I became numb down one side of my body.

Since ’93, my neurologist has had me on various migraine medicines, most of which I hate and won’t take because they turn me into a vegetable. I can’t drive or think—all I can do is sleep. I take those when things are really, really bad. Most of my traditional migraines start with a visual aura (flickering at the edges of my sight) and end with a colossal headache lasting around two days. They come in phases, or as they’re known, clusters. Cluster complicated migraines suck, but they are also an early indicator of stroke.

The other night I had another mini-stroke. It wasn’t quite as bad as the first one 15 years ago. I became very dizzy, lost vision, and became partially numb, including my speech. I had the phone in my hand with “9-1” dialed, deciding that if my arms started to get too numb to feel the phone anymore, I’d have to dial the final “1.” The headache remained for three days. This gave me time to think about how one of these times, it’s going to be the real stroke. And it will mean permanent brain damage and ultimately death at way too young an age. I’m 43.

It is only a matter of time before I grab my head like Fred Sanford used to grab his heart on Sanford & Son in the 70s and say, “It’s the big one!” I’m coming to join ya, Eleanor.

Oddly, this doesn’t scare me; we all die sometime. My 18-year-old, if she read this, would just roll her eyes and say “We know, Mom, play “She’s Always a Woman” by Billy Joel at the funeral.”  Closed casket. Black and white photo of me smiling on the top. Or even cremation, and toss the ashes near my favorite sea glass hunting beach. There won’t be many people at the memorial service because most people don’t like me. This will save money on fried chicken. You’ll be able to tell by the flower arrangements, even though there will only be a few, who really knew me. Orange gerbera daisies, and no fucking carnations. You guys should also play “My Way” by Frank Sinatra, because he’s awesome. Can you have Carvel ice cream cake at a memorial service or is that only for birthdays? Fuck it. I want a Carvel ice cream cake, or, if it’s summer, a Wattamelon Roll from Friendly’s. Those things are awesome.

And it’s not like they’ll give me an ice cream headache anymore.