I Will Not Go Unsatisfied

Getting one over on the Chelsea Clearview cinema. 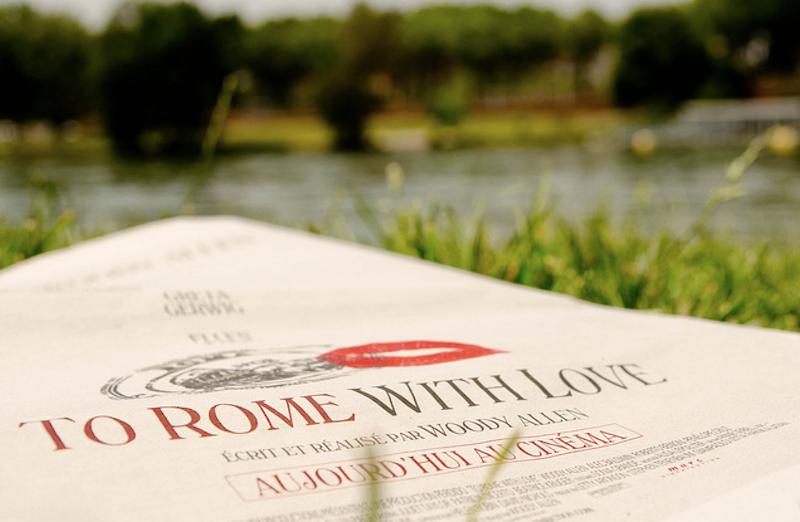 “Oh, no. Really? Alright, well, what’s that “Southerland” one?” The octogenarian shook his finger at the digitized board behind the woman’s head. It read, Beasts of the Southern... “Yeah, okay, I’ll take one for ‘Southerland.’ 7:15.” He shelled out the dough, and turned on his heels, back out into the street. I took his stead, requesting the same of the woman in the transparent box. Shed of $13.25, I proceeded through the theater doors, precisely an hour ahead of the film’s start time.

Both the man and I had gone to the movies with the same intention of viewing Woody Allen’s latest Euro-pandering romp, To Rome With Love, only to be met with the gleam of a “sold out” sign. Instead of conceding like the man, however, I was going to fool the Chelsea Clearview employees. Or so I thought. I strode up to the man who was droning, “Tickets,” like a faltering foghorn. My friend, who saved me a seat inside, was now loitering over his shoulder, at the ready to ensure my entrance.

“Nuh uh,” he said, when I handed him the $13.25 little rectangle. “It’s too early to go into the theater. Your movie doesn’t start for another hour.” “What?” I said incredulously. I locked eyes with my friend, then with my ticket. “She gave me the wrong one! I bought a ticket for To Rome With Love.”  “Go over there,” the man gestured to the help desk, visibly unmoved. I walked two feet—may or may not have cut the entire line—and straddled the register with outstretched hands. “Hi. I’ve got a ticket for To Rome With Love, and the woman accidentally gave me one for Beasts of the Southern Wild.”

“But To Rome With Love is sold out.”

“I know. I bought this earlier. Today.”

“Okay, but it would be impossible for me to transfer it because it’s sold out. The computer won’t let me do it.” I turned across the barrier to my friend for assistance. “He has a seat for me inside. He says it’s only half-full.” “I’m sorry, ma’am.” The other employees behind the desk were now inching towards our conversation, bashfully at the ready for back up. “This is ridiculous. I’ve already seen this!” I glared at “BEASTS OF SOU” in my fist. “Can I at least get a refund?” “Sure,” she said flatly.  If I didn’t know any better, I’d think Mr. Clearview pumps his employees’ faces with botox, so they may remain forever un-phased.

She pressed a button and the tray of cash shot out into her gut. As she began counting the bills, a wave of relief washed over me. I noticed my friend conspiring with another employee but thought nothing of it. The film didn’t get great reviews, anyway. I was angling the 13 dollar bills into my wallet when my friend gave me a shout.

The lines in the cashier’s face finally moved as she released a sigh. “I just gave her money back,” she affirmed. “Here you go.” I reached across the register. “Thanks!” I ran back around to the entrance, and the genial employee gestured me past the foghorn.

“What you tell her?” My friend and I were two-stepping towards the theater. “I just convinced her that everyone who bought tickets for To Rome With Love was theater-hopping to the Dark Knight. That’s why everything at this time is sold out. The theater is half full.” Anyway, To Rome With Love was a lot more entertaining than three hours of aural assault.