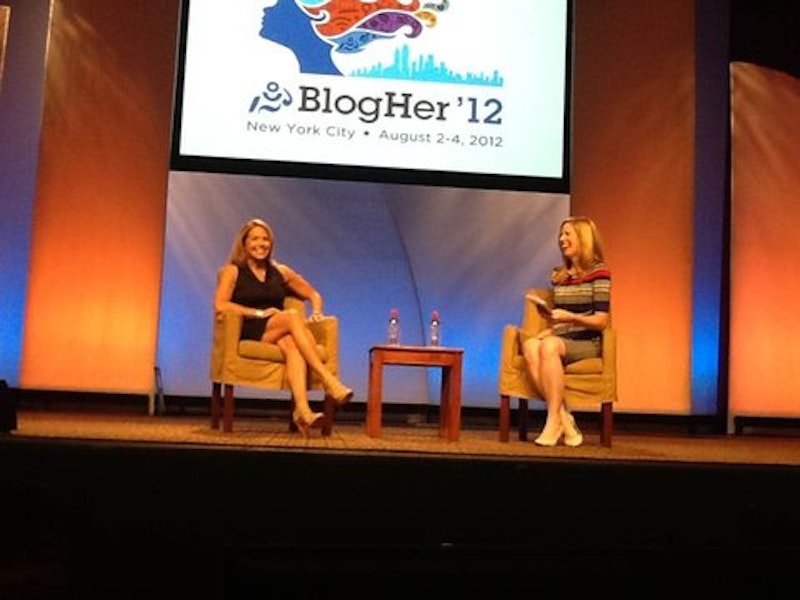 Every little girl (and even a grown up blogger girl) wants a role model. Growing up in the 1970s and 80s showed me feminism as an alternative to the traditional housewife role I’d experienced with my own mom. We early Gen X gals were charged with both bringing home the bacon, and frying it up in a pan (not to mention never letting him forget he’s a man).

This past weekend in New York City, I spoke at BlogHer, the nation’s largest blogging conference. It’s attended by 5000: mostly women, and a few hundred intelligent dad bloggers and other men who clearly enjoy the ratio. The conference is important enough on the social media landscape that President Obama addressed us live via satellite on the first conference day. Rumors of a walkout by Republican women bloggers were squandered when an announcement was made that Mitt Romney had also been invited to speak, and declined.

Two women keynoters were announced to the enthusiasm of both conference planners and attendees. Whether we were personally fans of Martha Stewart and/or Katie Couric didn’t matter as much as how cool it was that they had agreed to speak. Two years ago when I spoke at this same conference, only 2000 attended and there was no celebrity keynoter, much less two. This year was a clear indication that blogging was now legit in the print-shrinking media, with much less condescension.

I heard both media powerhouse women speak. Here are my thoughts on each.

Martha Stewart: She was late. Wearing her traditional uniform of a button-down shirt and khaki pants, she appeared relaxed. She talked about her vast media empire. It was clear she had vetted the questions beforehand and had prepared answers. She spoke of nothing controversial and showed no sign of weakness, demonstrating her well-known ironclad personality. Only one question seemed to bewilder her. When asked to name something she does not do well, she was speechless. The pause in her response was so long and awkward that from the audience, you could hear, in addition to some laughter, a few responses:

BlogHer: What is something that you don’t do well?

I found myself checking Twitter to see what people were saying about her, because I was kind of bored. (She then answered that the only thing she doesn't do well is something she hasn't learned how to do yet.)

Katie Couric: She was late. Wearing her traditional uniform of an adorable dress showing off both her perfectly toned guns and gams and a $2000 pair of Christian Louboutin sandals, she appeared joyful. She talked about her new talk show premiering in September; the impact bloggers have had on journalism; and the balance between work and family. ("I don't like the 'how do you do it all' question, because Brian Williams never gets asked that.") She joked with the audience, answered questions thoughtfully and intelligently. She was animated, passionate, at times borderline emotional, and overall a very real and engaging woman who really impressed as a journalistic role model.

Afterwards, she greeted some of the bloggers, and I shook her hand and thanked her for the inspiration. She beamed. Beaming is what she does.

Don’t get me wrong: I admire Martha Stewart for being the media icon she is. She’s more brilliant at branding than probably anyone else. I enjoy her products. I appreciate her Halloween decorations in particular. She’s just not a likable person. I hoped maybe seeing her speak in person would change that opinion. It didn’t.

On the other hand, I’m genuinely excited about Couric’s new talk show. While it’s fantastic that she was able to shatter the male-dominated network news stranglehold, the format just isn’t a natural fit for her fun personality.

Mary McCarthy blogs at Pajamas and Coffee, where she's writing more about BlogHer.