Wallace Stevens and the Colonial Snowman That’s There

The poet’s new American imagination looks uncomfortably like the old. 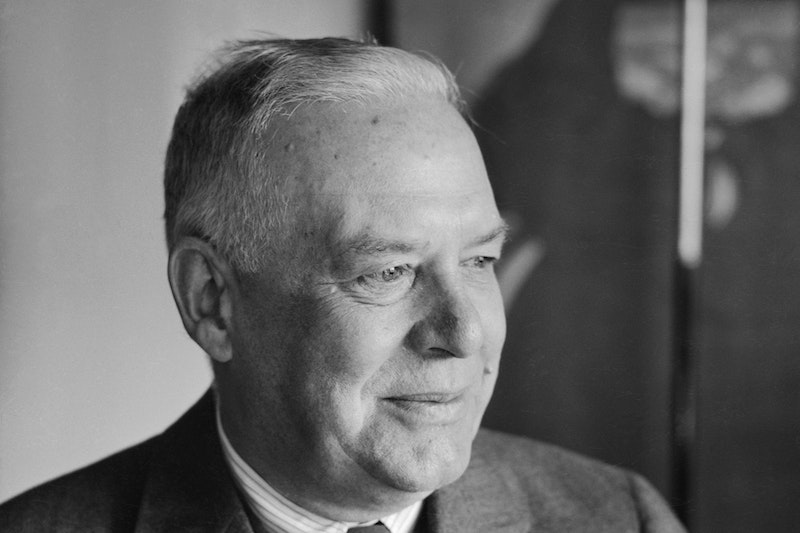 Wallace Stevens was one of my favorite poets when I was reading poetry obsessively 30 years ago. His first book, Harmonium, is out of copyright now, and finally I was able to read it all the way through. As I remembered, his writing is marvelous in its verve, vocabulary and imaginative bombast. But I was also more aware this time of the downsides of some of his expansive Americanness, which is specifically an expansive white Americanness.

The long poem “The Comedian as the Letter C” is classically interpreted as a fanciful narrative about Stevens’ own aesthetic or philosophical move to a new American poetry that’s more real and powerful precisely because it’s more conscious of its own transience and fictiveness. But the narrative is on the level about a man, Crispin, who travels from Europe to the Americas in search of “some starker, barer self/In a starker, barer world.”

The Americas serve as a vision of authenticity stripped of humanity. That’s a metaphor made possible by treating the “gross Indian” as a device rather than a person. The heroic-minded artist pushes aside indigenous people, “Abhorring Turk as Esquimau.” When Crispin does settle down on colonized land and raises a family, it’s presented as a kind of inevitable compromise. Crispin wanted to escape the old self, but finds it still with him, as if instead of opening his consciousness to meet new people and new ideas, he stole somebody’s stuff and added it to his pile.

One critic argues that the conglomerate of Brazilian, Mexican, Caribbean and Anglo words in the poem is anti-colonial in its polyglot sensibility. I’m not sure I buy it. Colonizers have always been willing/eager to pick up things, including words, from the colonized. You didn’t have to be anti-colonialist to eat potatoes or smoke tobacco.

Here are the first stanzas of “Earthy Anecdotes,” the wonderful poem that opens Harmonium.

Every time the bucks went clattering

A firecat bristled in the way.

In a swift, circular line,

Because of the firecat.

Americana and/or regional poetry traditions (“the bucks went clattering/Over Oklahoma”) are chased about the landscape by Stevens’ explosive, supple imagination (“The firecat went leaping.”) But you could also read the verse as a metaphor for a colonial dream which harries those on the land to exhaustion, reveling in their distress. (“Later the firecat closed his bright eyes/And slept.”)

And here in full is one of the most straightforward, and entertaining, pieces in the volume.

THE WORMS AT HEAVEN’S GATE

Out of the tomb, we bring Badroulbadour,

Within our bellies, we her chariot.

Here is an eye. And here are, one by one,

The lashes of that eye and its white lid.

Here is the cheek on which that lid declined,

And, finger after finger, here, the hand,

The genius of that cheek. Here are the lips,

The bundle of the body and the feet

Out of the tomb we bring Badroulbadour.

Stevens is having fun with religious ideas of resurrection by turning some ancient quasi-religious figure into worm-food and poem-food. Stevens is the worm here, cataloguing all the bits and pieces, “The lashes of that eye and its white lid,” “finger after finger,” dissecting them in his own “genius.”

So where’s the colonialism? The Seussian name “Badroulbadour” is a kind of Orientalist goof—a Western exoticist mock of Islamic/Arabic and/or ancient Egyptian nomenclature. Stevens—like some New Atheists—leverages the stigma against Eastern cultures and practices as a way to mock religion more broadly. He chews up and digests some ill-defined, dissected non-Western someone to make his own memoriam. Badroulbadour’s death, “The bundle of the body and the feet” are crafted on Stevens’ “lips” into a monument to Stevens himself, the bombastic American poet who knows that their eternity is nonsense fodder for his.

Does that mean Stevens is a bad poet? Not to me! “The Worms at Heaven’s Gate” is odd and funny and makes you want to slither about with those solemn chanting worms, creating new forms, new landscapes, and new dreams from the most disparate corners of your own mind.

Stevens is forging a new specifically American imagination, filled with worms and fire-fangled feathers and concupiscent curds. But it’s also sad to realize how often that new imagination, for all its verve and firecats and wild ducks, mirrors the old. Stevens’ poetry is exhilarating because it feels like it has no fetters. And then you realize that these particular fetters, at least, are still there, squirming in the brain matter, bounding across Oklahoma, sailing to a supposed New World. Stevens boasted in “The Snowman” of seeing “Nothing that is not there and the nothing that is.” But one meaning of that wintry vision is that he can imagines the real world as white.