The Opposite of Love

The consequences of war. 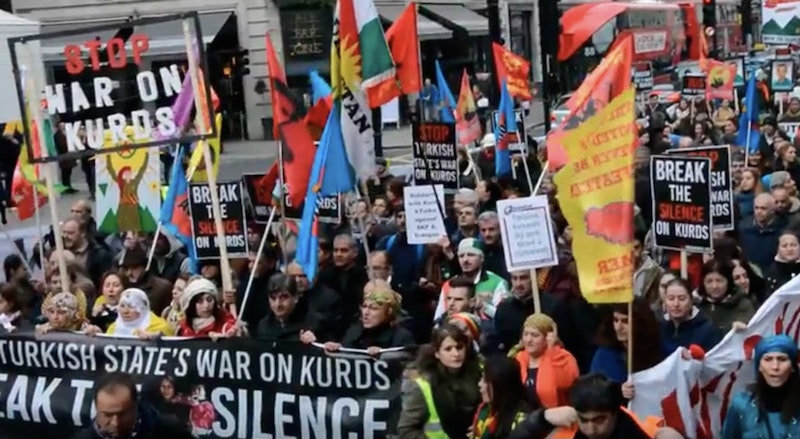 The opposite of love isn’t hate, it’s indifference.

I remember a demonstration in support of the Kurds a few years back. This was towards the end of the 1990s: ‘97 or ‘98. It was against the building of the Ilisu Dam, which at the time was still in the planning stages. The demonstration was taking place at the Department of Trade and Industry on Victoria St. in London. The British government were helping the Turkish government by means of financial loans. Were the dam to be built, we were told, it would flood a vast area of territory in the Kurdish regions, and, in particular, destroy Hasankeyf, an ancient Kurdish settlement dating back to the Bronze Age. (Since then, in fact, the dam has been built and Hasankeyf has been flooded.)

The Kurds had been at war with Turkey ever since the victorious allies had split Kurdistan apart after World War I, leaving the Kurds without a country. Kurdistan was divided between Turkey, Iraq and Syria. In Turkey the very existence of a Kurdish identity was being denied. Kurds were categorized as “Mountain Turks,” the Kurdish language was banned and Kurdish culture suppressed. People weren’t allowed to sing their own songs. Kurdish children were forcibly re-educated in Turkish schools.

There had been a long-running guerrilla war going on in the region since the 1980s, led by Abdullah Öcalan of the PKK, the Kurdistan Worker’s Party  Öcalan himself was in a Turkish jail.

The Department of Trade and Industry was a glass-and-steel building on the approach to Parliament Square. It was shimmering in the sunlight, reflecting the street and all the buildings around it, looking suitably anonymous, as if it wasn’t really there.

I was with my friend Paul. There was a knot of people on the pavement outside, maybe 20 or 30 of them, with a couple of policemen looking fairly relaxed. There was someone climbing up a lamppost with a digital camera in his hand trying to get pictures from every angle. One of the policemen asked him to get down. He paid no attention.

There was some drumming and dancing. The Kurds had their arms linked in a line and were doing this elaborate stepped dance involving handkerchiefs waved in the air. I remember it very clearly: the kicking, dancing and the trills and whoops of excitement. There were a few cars lined up by the side of the road including an old Volkswagen van. Paul took me over to it and introduced me to the owner, one of his friends, who was putting up slogans on the van. The man smiled and said hello, and shook my hand formally, with a small bow.

Paul said, “Show him the pictures.”

The gentle-eyed Kurd opened a folder and showed me the first picture. He said, “These are photographs taken by Turkish soldiers as trophies. They sell for a lot of money in Istanbul.” It was an enlarged color photocopy of an ordinary snapshot, laminated for protection. It showed a Turkish soldier in a snowy, mountainous landscape wearing a beret. He was kneeling down on one knee, grinning triumphantly, holding up a pair of objects in his hands. It was hard to make out what they were at first. They were about the size of footballs, and that’s what I took them to be. But then my eyes focused on the detail, and I saw they were severed heads.

The Turkish soldier was holding them up by the hair as trophies. The snow was stained with patches of blood, as blood dripped down from the ripped tendons of the neck, as blood stained the soldier’s hands. I’d never seen anything like it. The eyes in the two heads were rolled backwards into the skulls. Open-mouthed, they seemed to be screaming some unimaginable blasphemy to the sky. I immediately began to cry. The picture was like a jolt of extreme violence, like something from a nightmare. Ordinary Londoners passed by in motorcars, blissfully unaware.

Paul was looking at me pointedly, while the quiet-eyed Kurd spoke to me in an even voice.

“I have seen 23 of my family killed,” he said. “My brother was killed. The Turks came to the village and called everyone out of doors. They took 10 of them and shot them in the head while the others watched. The people were made to clap. If they didn't clap, they too were shot. My brother was 14 years old.”

There were several more of these photographs, of soldiers holding up severed heads, sometimes one head, sometimes two. A number of soldiers were standing in front of the headless corpse while another held up the head.

Then my Kurdish friend showed me another photograph. This, too, was like a snapshot. It showed a family in someone’s living room, on their knees, posed, looking at the camera. There were family trinkets displayed on a mantelpiece, and pictures and hangings on the walls. Before them a dead body. The body’s naked and has long white gashes along the legs. You can see the bone. The family consists of a woman and several children. The woman’s eyes are unreadable, her face held in a taut mask. The children just look towards the camera, eyes as deep and unfathomable as the night.

My friend said, “This is the dead man’s family. They are being made to pose by the corpse. Those wounds on his legs are where he has been tortured.” I was speechless. I’ve never forgotten that image. I remember going into a shop soon after to the toilet. There were all the products lined up in their various displays, looking shiny and new. But I couldn’t help seeing the blood that seemed to flow from the photographs underlying this conspicuous display of opulence all around me. I couldn’t help thinking of the murder of innocence.

Now, imagine those children made to sit before the corpse of their father while an enemy soldier takes a photograph. Their faces betray nothing of their feelings. But what will be seething in their hearts? What rage, what anger, will have been born that day? What hatred? What acts of revenge? What future violence? Do we really expect them to forgive?

Now imagine that on a world scale: in Palestine, Iraq, Afghanistan, Pakistan, Yemen, Syria, Somalia, Libya and Bahrain. All over the world. Everywhere there’s a war.

Thousands of corpses. Who knows how many corpses or how many children there are, just like these children, tortured by the horrors of war? Who knows the scars on the heart of the world or how much blood has been accumulated there? How much sorrow, how much anger, how much violence, how much pain? How much love seeking revenge?

Why don’t we know this? We’ve been brought up on stories about World War II, the Nazis taking men from the village and shooting them arbitrarily, killing 10 men for every German. So why don’t we know it’s still happening, that fascism still infects our world? Not only that, but that our governments are supporting it, with grants, loans and sale of arms? Why do we only hear about the atrocities of official enemies but not those of our official friends? If this was going on in China, Russia, Venezuela or Iran it would be headline news all over the world. But Turkey is in NATO so it was ignored.