The Landers’ house was a regular hangout for my oldest friend Michael and me. 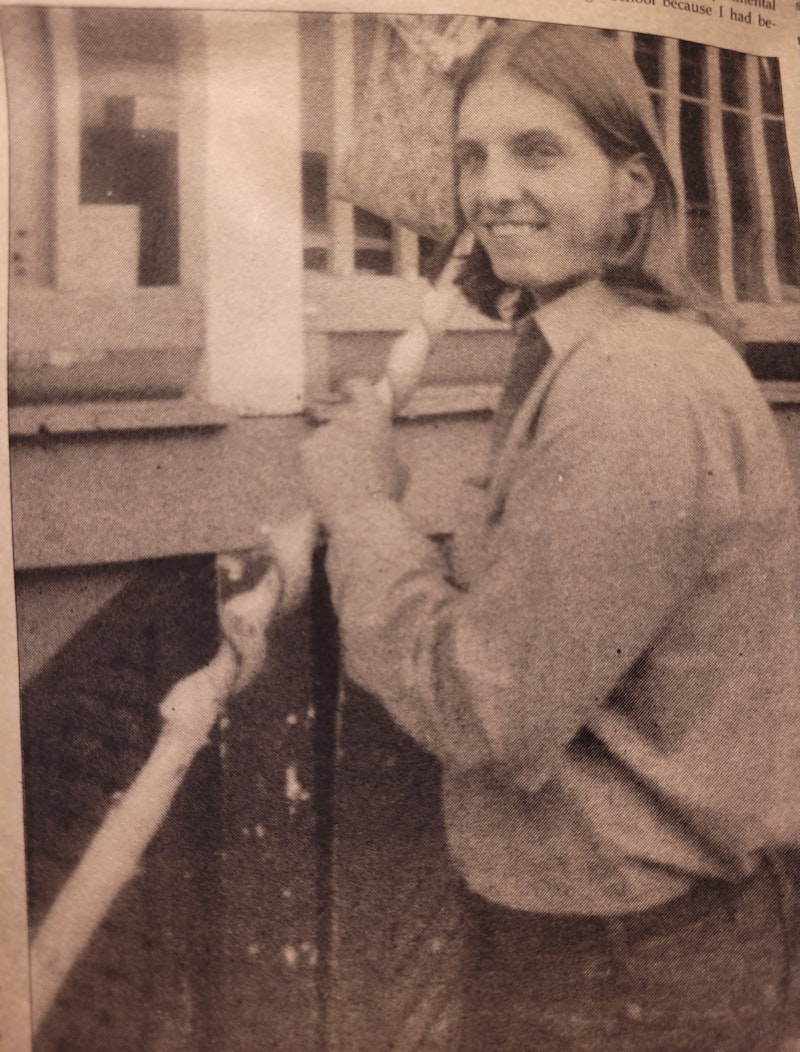 We were untamed youth nestled in our peaceful little cove. A bygone Baltimore’s forgotten vintage. A sanctuary in the complicated  world. Raised up, wild children in flux navigating the old-timey neighborhoods of Hamilton and Lauraville, then a quiet hamlet of that maze of middle-class suburbia, a short bus ride to the city. In transition, rejecting the moldy, dead-wrong ways that exposed half-truths taught by well-meaning teachers, ancient clergy, and clueless loving parents, those elders who believed in the American dream.

There were few outlets for our dissatisfied, high energy. The nation had soured, slowly losing its grip on time-honored worn-out old ways. There was a shift in thinking. Our orbit of influence gradually expanded beyond those chain-link fenced-in backyards, scattered vacant lots, and school lot playgrounds. Our territory was navigated through the nearby woods of Herring Run Park, around Lake Montebello, and a few blocks of small businesses along the main drag of Hartford Rd. Hanging out on porches, garages, and club basements, we held our own in relative safety. This geography was our springboard to the unknown bigger world yet to be discovered.

All part of a new generation taking over. It was the only rebellion in town, attempting to grasp the importance collectively as a group of angst-driven teen hellions. Like messages of protest songs and the signs of the time, we listened closely, watching it unfold. The Buffalo Springfield said, "I think it's time we stop, Children, what's that sound? Everybody look, what's going down?" Stephen Stills originally wrote the lyrics to that anthem about being hassled by anti-loitering laws on the Sunset Strip. Yet, it was much bigger than that. With anti-war protests, civil rights unrest, and a distrust of authority, the anti-establishment sentiment made for a dangerous mix of anti-heroes and fun-loving villains.

Those we met along the way made an impact. For example, I  met one such inspirational person, Jody Landers, in the late-1960s. He was part of a big family, the eldest son. They lived in a modest gray shingled house on the corner of a quiet, nondescript tree-lined avenue in Hamilton. Jody was a poster teen for free spirits. It propelled our little world, thrown up and out into the spotlight of a senseless war, nuclear annihilation, political upheaval, racism, and social unrest.

During those years, Jody was an activist for peace and community action reform. He became the second director of Harbel Community Center, following his mentor, Lutheran minister David Wecht. The minister encouraged Jody to pursue local politics and issues. Even in those early days, long before he was a member of the City Council. He was radical yet democratically fair-minded, a natural-born leader. We looked up to Jody. A champion of the youth movement and arts culture we embraced. His long blond hair, charming good looks, winning smile, and charisma helped define that image. Unafraid of the antiquated stuffy old guard transforming the culture. The old-fashioned, outdated ways no longer held any true meaning. Instead, they were passé and demanded change.

Although a bit younger, we looked up to Jody and other older teens, aspiring to be like them. My brother, who is only one year older, also hung out with the cool guys and was a role model to emulate. One year is a lifetime when you're young and green. The Landers’ house was a regular hangout for my oldest friend Michael and me. The Landers’ parents were a very progressive couple. Jody's father was a deacon at St. Dominic’s, the local Catholic Church, and later at St. Anthony's. He worked hard to keep his family safe and secure. We grew up in that churchy flock, and it's no coincidence, the churches in the area were focal points for the community. Mrs. Landers was an open-minded earth mother. Her love for her kids extended to all of us. They never judged or criticized anyone. They weren’t bohemians or hippies. There were always folk songs, blues, and rock music playing on the living room stereo, positive vibrations and munchies. However, the few excursions shared with Jody in his car for an afternoon joy ride away from the neighborhood were eye-opening adventures and life-changing experiences to us. Sometimes it’s the little stuff that matters most.

Those few road trips stuck with me all my life. On a summer afternoon, Judy took Michael and me to his big old brick rowhouse he and a friend had recently purchased in East Baltimore near Patterson Park. It was a halfway house for runaways and troubled teens. A place to get it together for those less fortunate youths who needed a place to crash and rethink life choices. A second-chance home. The local police didn't see it that way, believing it was a drug den, and not long after our visit, the house was raided. Nothing illegal was discovered in the raid except for a souvenir Indian peace pipe authorities thought was drug paraphernalia. There were no charges, although the city police never admitted their blunder or ever dully compensated them for property damages made by law enforcement.

The other journey was a long drive up Route 1 past the Conowingo Dam along the Susquehanna River, past the Mason Dixon Line into Pennsylvania. Jody took the time to listen to us as equals and shared that heartfelt gratitude he learned from his parents. To celebrate life and treat others with the same respect you have. We choose different paths along the way to understanding choices. Love and family will win over hate and division every time. It’s amazing what a little kindness can do down that road.