That's Why I Love You 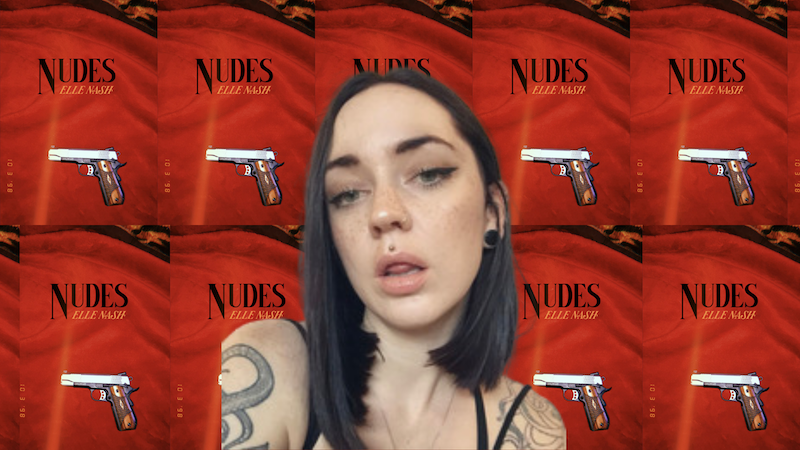 Elle Nash’s characters in her short story collection Nudes come from the working class, and underclass, which is where people end up when life doesn’t end up well. All of the stories take place in bigger Midwest cities, like St. Louis, though the lives described could be Anywhere, USA. Nash’s style is minimalist: we don’t see characters’ feelings, but rather their actions and dialogue, and surface-thoughts if the story is in first person. When you read “Hills Like White Elephants,” you know, or sense, what the two main characters are thinking and feeling inside. Nash’s characters’ feelings are so buried that they come across as emotionally dead, and/or psychopathic, like the two characters in “Room Service,” early-twentysomethings who’ve just married, and are spending their honeymoon night laying on the bed watching videos of real people getting killed on the young man’s computer. The story is from the perspective of the woman, and while there’s some past emotion when she describes meeting him just a few weeks earlier—excitement, at least—by this wedding night she just seems cold:

David opens his laptop and navigates to a website full of recordings like this: a video of a man being burnt alive in a cage, his body going taut and black; a video of a man getting shot in the head, a cavity the size of fist blowing out the back of his skull. There are a lot of things I don’t know about my new husband. He looks at me when he pulls up the video. His eyes are sallow and set back like a farm animal, expressive and docile.

I pretend to watch, but I focus my eyes on the intricate beading of my wedding dress draped over a chair in the corner. My breasts ache. A man on the screen shrieks and a sheet of goosebumps appears on my skin. I am filled with something soft and new and want to cry, but nothing comes.

She interacts with him, and even shows interest in the videos, but any reasonable reader will be thinking she’s feeling pain, hurt and regret. But the most she’ll allow herself is acceptance, and she has what she wanted: someone at her side. Which is heartbreaking. Every story in Nudes is heartbreaking.

One of most powerful stories in Nudes, “Thank you, Lauren Greenfield,” is a collage meditation on bulimia and anorexia. The narrator at one point calls what she’s writing an essay, so there’s no “plot.” It’s a look into the thinking of a young woman, a teen, and her body image. She’s not dumb: she comes across as intelligent, with the ability to think critically about other people, and a documentary about anorexia called THIN (which is real, directed by Lauren Greenfield, available on YouTube). She even thinks critically about herself.

I have decided that I have late capitalist bulimia in which I purchase many things quickly and then almost immediately regret having consumed these things. I attempt to rid myself of these regrets as quickly as possible by donating old clothes and items that are similar to the items I have purchased in order to assuage the guilt I have contributed to this system.

The “story” here—or the fictional essay, and the meta-meaning—is is a critique of how critical thinking can be used justify destructive behavior, with implications for the larger world.

Nash is a master at natural-sounding dialogue, and common speech. “Brittanies” is an eight-page monologue-slash-ramble by a bro-dude telling a story to a “you” (us), centered around two girls called Brittany, and male friends Meatsack and Rayray. I think the ellipses (only one in this excerpt) are when he’s hitting a bowl:

Shit, man. So this one time Meatsack was in love with the Brittanies, so...what was her name. Brittany Smith. And there was Brittany Siebens. They were hot sisters. I don’t remember. Maybe they weren’t sisters. I remember that one girl, Brittany Siebens. You know who I’m talking about? Black hair Brittany, and blonde Brittany. And blonde Brittany, he was all about her. And she liked me. I already told him, we got housed once and he got me drunk as fuck and he was like, “No, you’re gonna tell me the truth.” He passed me a shot and I was fuckin’ bleary eyed and couldn’t see shit and he was like “I know you always tell me the truth when you’re drunk.” And I said “man, I’d never fuckin’ lie to you,” And he said, “Take that shot.” So I took it, and he was like “Do you have any intentions with Brittany? Siebens?” And I was like “Nah dude, that’s all you man.”

I told him, I was like “Man, you saw her first dude, it’s cool. You know. There’s all kindsa females. It’s cool. That’s your female. You do what you gotta do.”

And he was like “That’s why I love you.” He grabbed my face and pulled it to him, and he was all slobbery, you know, he was like, “I love you.” I remember it. It was a good day.

Aside from the hint of homosexuality or bisexuality in this exchange at the end, which the narrator isn’t even aware of, or would want to admit, I do like that that we’re getting more than a “bros before hoes” kind of life philosophy, something nobler, more of a “honor among bros.” All the punctuation and spelling is Nash’s, and I love it, even when it’s not consistent. I wish there were more experimentation like this in fiction, à la Hubert Selby Jr. (Last Exit To Brooklyn). The visual sloppiness on the page visually represents the sloppiness of this guy’s thinking, and life.

Above all, Nash captures the world of digital natives, and how their lives are mediated through technology: cellphones, computers, the Internet. Again, like the newlywed couple in “Room Service,” who have to interact via watching videos online. Or the story “Cat World,” which led me to order her book. “Cat World” really captures this digital native world, not the least because half of it happens online, with the narrator, a young teen, showing how she navigates different personas. She’s a “furry”—someone who pretends to be, and acts like, a cat, or a cat-person. When she’s approached on the site by an older man, she poses as an 18-year-old, with a fictional background. There’s an innocence in doing this, since she’s pretending so that he’ll keep talking to her, when he seems to be creeping on this teen site to meet girls and would probably talk to her if he knew she were younger. Which she is. And we don’t know how old this guy is, or even if he really is a man (though probably). Meanwhile she’s navigating the “real world” with real-life creepers, and a girlfriend who thinks she’s weird for acting like a cat. This is the world teens must navigate: inventing different selves, for protection and as a way of meeting people. Who is this narrator by the end of the story? I don’t think she even knows.

You’re not going to find an Elle Nash story in The New Yorker. You’re not going to find Nudes on the front table of your local bookstore. But if you’ve lost hope with the blandness of Big Five fiction, start exploring indie publishers like Short Flight/Long Drive Books (a division of Hobart Press) and others. Nash’s short stories are so powerful that I’m not sure I could take a whole novel, but I’m curious what her next writing project will be. Read her now before she’s the Queen of the Underground.