Walking Through the Mall with James Van Der Beek 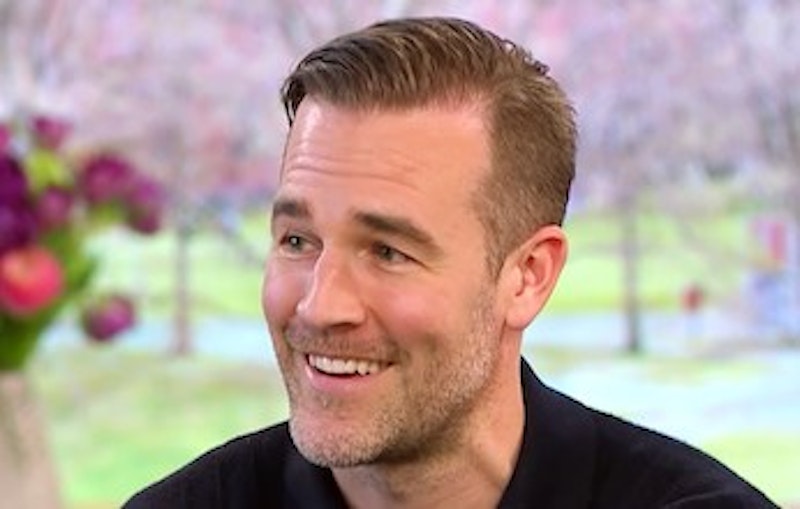 "Back in the 90s, I balled every burly girl with a golden mullet who asked for my autograph," James Van Der Beek says to me. His own mullet has receded into a high-forehead Ivy cut.

We're walking through the Towson Mall, like we do every Tuesday afternoon. He looks up at the domed skylight, a cupped hand arched over his brow, shielding his eyes from the harsh winter sun. The shadows of the skylight's grilles fall vertically over his body like prison bars, and the white slices of his black-and-white striped Givenchy suit glow with a pale warmth. I stand un-illuminated, next to an artificial palm tree and a concrete column, its paint—eggshell, I would guess, based on the swatches James and I examined at Home Depot last Thursday—chipping off in flakes, like dry skin.

"I always insisted my hotel rooms have a mirror on the ceiling," he says, "Above the bed, so I could get a bird's eye of my blowjob, watch the Phoenician plumage of the girl's mullet flutter as her dome bobbed up and down on my crotch, the back of her head identical to mine. When I took her, I always took her from the bottom, let her saddle onto my hips like the seat of a bulldozer and have her fun. After a few minutes, though, I would slide my hands up the small of her back, feel the ripple of her obliques with my callous-less fingers, grip her broad shoulders, and lower her down, chest-to-chest. She might try to kiss me then, or nibble on my ear, or press her forehead against mine in some vain attempt at eye contact, but I wouldn't have it. No, that's when I would place a firm hand on her neck, my knuckles nestled between her knotty vertebrae, press her face into the mattress, her head parallel to mine, and look up at my reflection, pretending, for the final few seconds I lasted in her tang, that I was fucking myself."

I shush James and point to a seated toddler holding a soft-serve ice cream cone, trying to wriggle out of the palm-clamp his grandmother has on his ears. The toddler kicks his legs through the air, still too short to reach the ground. The teak bench wobbles back and forth as he kicks; it must have a couple of screws loose. Streamers of melted vanilla run down his clenched hand and drip onto his nylon sweatpants. James nods. "Exactly."

I grip James by the bicep and guide him down the mall's ground floor artery. We pass dozens of storefronts wordlessly—Forever 21 and Reebok and Teavana and Build-A-Bear—before he stops, his black loafers squeaking against the floor like a late-braking car, and turns to me, saying, "Let's treat ourselves and get fancy popcorn today. I'm feeling Canadian."

He's talking about Harry & David, a Good Housekeeping-type fruit basket company that sells a brand of chocolate covered popcorn—Moose Munch—that James loves. For some reason, he thinks moose are unique to Canada, and that Harry & David import the popcorn from Nova Scotia. He pretends we don't eat there every Tuesday; I think he feels bad about the calories.

I nod. Moose Munch is one of James's only remaining pleasures; who am I to deny him? Besides, we were already walking in that direction.

The mall is divided into two halves, each anchored by a department store: Nordstrom on the left, Macy's on the right. Harry & David is next to the latter.

I suggest we stop for tea first. "So long as you're buying," he says, laughing. I always buy.

I walk up to the Kosher Kafe and order two medium green teas while James samples fragrances from a nameless kiosk. I feel bad for the salesman—an olive-skinned thirtysomething, wearing a tight black t-shirt and a jar full of Pomade in his hair—because he doesn't know that James, with perfumes, is like a penniless kid in an ice cream parlor: he'll sample every flavor and leave without making a purchase. That's why James always smells like the olfactoric equivalent of mixing sodas from every spout at 7-11.

The cashier hands me the drinks. I head back to James and hand him a tea. "Let's go," I say.

He sips his tea with a scalding slurp. He does it again. I stare at him while walking. "Why are you doing that?" I ask.

"This tea," I say, "Is boiling hot. I can barely hold it for five seconds without needing to switch to my other hand. Why are you drinking it?"

"It's incredibly painful." He takes another sip. "My tongue is already starting to go numb. It feels like a foreign presence in my mouth, like a sea slug crowding my molars." His speech begins to slur. "It's incredibly painful," he repeats, "But isn't that the point? To recall an experience, to corroborate your memory, to have tangible proof that something happened, you need a scar. You need a permanent reminder, something that won't fade away."

I can tell he's consumed in nostalgia because he passes the Wockenfuss kiosk without asking for a free sample. "Back in the 90s, my dick never had a chance to dry off. It dribbled poon juice from morn' to night. But dicks don't stay wet, Booker. As my memory fades, so will my conquests. And then what? It'll be like they never happened."

We pull up to Harry & David, but nothing is there: the shop is empty; the storefront sign has been removed; the beige walls are dotted with holes where the shelves were originally installed.

James' eyes water, but he doesn't let a single tear fall. He presses his palm against the glass door; removes it. His handprint slowly vanishes. "Tony Hawk sucked my dick in 1998," he says.

I pat him on the back, give him a conciliatory rub. "I'm not sure I believe you," I say.

"And why would you?" James asks. "He didn't leave teeth marks; there's no scar. Life needs to be painful to be remembered. You need a scar to reaffirm the past. That's why I love the mall, Booker. Look around you, it's a giant scar. The infrastructure's rotting, the products are outdated, the stores are either failing or shuddered. And yet they can't tear it down, at least not for a long time. This thing's the castle of the county. It'd take a thousand men to demolish and clean up the rubble."

A custodian passes by, his mop bucket clunkclunkclunking against the tiles. "Hey, buddy," James says to him, pointing at what used to be Harry & David, "This place up for lease? I'm looking for a new apartment."