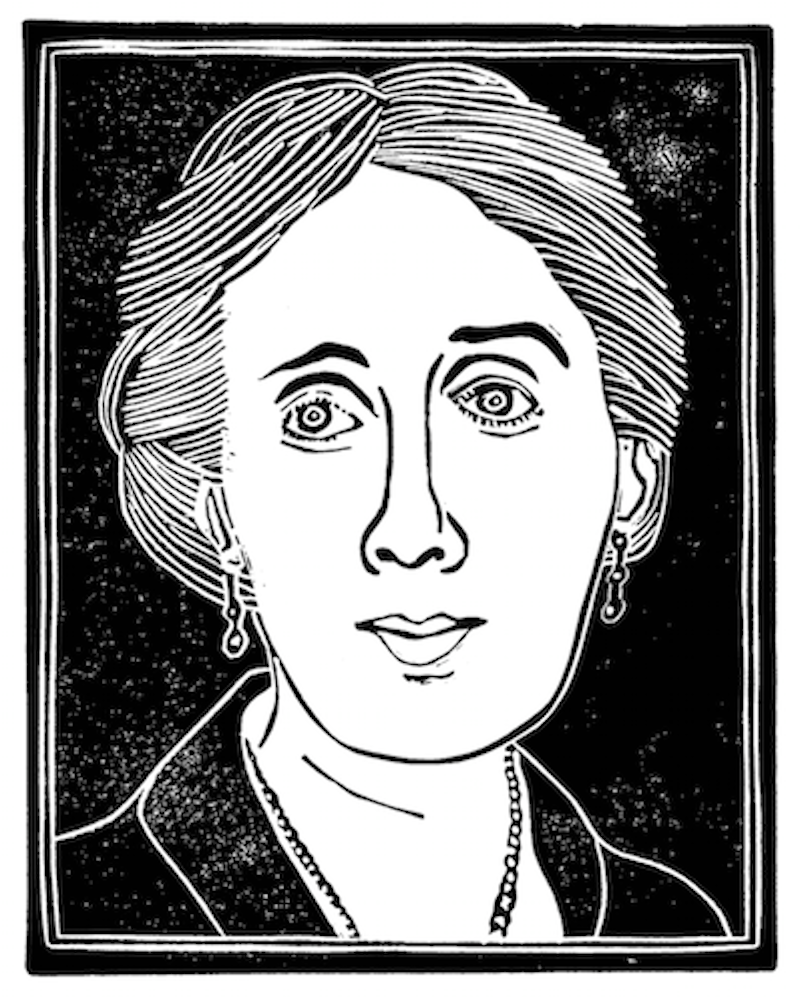 Virginia Woolf was born into a life of privilege and high-society connections. Her father, Sir Leslie Stephen, founded the Dictionary of National Biography. Her mother, Julia Stephen, was a model who posed for pre-Raphaelite painters and early photographers. And her great aunt was Julia Margaret Cameron, a noted photographer.

Woolf's childhood was influenced by Victorian literary society. Visitors to her home included Henry James, William Thackeray and her godfather, James Russell Lowell. Woolf had two brothers, a sister and multiple step-siblings. Her parents taught her at home while her brothers were sent away to school to be formally educated. Woolf later came to resent this.

Woolf determined at an early age to become a writer. Her most vivid memories were of summer holidays in St. Ives in Cornwall. These experiences later informed her novel To The Lighthouse.

In 1891, Woolf's mentally disturbed half-sister Laura was institutionalized. Four years later, when Woolf was 13, her mother died of rheumatic fever. Woolf said the loss was "the greatest disaster that could happen." The family fell into deep mourning and Woolf had the first of many mental breakdowns. Her father's grief was intense and all-consuming, forcing Woolf's half-sister Stella to care for the family. Stella died of peritonitis in 1897.

Woolf took study courses in Greek, Latin and history at the Ladies Department of Kings College in London. This brought her into contact with early reformers of women's higher education known as the "Steamboat Ladies." Her studies were interrupted in 1904 when her father died of stomach cancer. Woolf experienced a second mental breakdown during which she attempted to commit suicide by jumping out a window. She was briefly institutionalized at Burley House, "a nursing home for women with nervous disorder."

Woolf's sisters sold the family house and bought another in the hip Bloomsbury neighborhood of London. Woolf came to know the writers and intellectuals who formed the Bloomsbury Group. They included E.M. Forster, John Maynard Keynes, Lytton Strachey and Woolf's future husband Leonard Wolff. The group deeply influenced literature, art and economics and held modern attitudes toward feminism and sexuality.

Woolf began her writing career in 1905 at the age of 23 by contributing to the Times Literary Supplement. A year later, her favorite brother Thoby died of typhoid fever. Virginia and Leonard Woolf married in 1912. They would remain together until Virginia's death.

Woolf's first novel The Voyage Out was published in 1915. The story was about an Englishwoman's emotional and sexual awakening as she traveled abroad. The book was an indictment of the political and sexual mores of modern England. Woolf’s writing style experimented with a stream of consciousness lyricism focusing on the psychological underpinnings of the characters. She created visual impressions comparable to the writing of James Joyce and Joseph Conrad.

In 1917, Woolf and husband Leonard purchased a printing press and founded Hogarth Press in the basement of their London home. Hogarth became a respectable printing house that published Wolff's novels as well as work by T.S. Eliot and Sigmund Freud. After the end of World War I, the Woolfs moved to Monk's House, a cottage in the English village of Rodmell. Here, Woolf wrote all of her remaining novels including Night And Day (1919), Mrs. Dalloway (1925), Orlando (1928) and The Waves (1931).

In 1929, Woolf gave a series of lectures on the difficulties that female writers encounter because men hold disproportionate economic and legal power in society. She published A Room Of One's Own writing, "A woman must have money and a room of her own if she is to write fiction." The essay was seen as a feminist tract and became an inspiration to female writers everywhere. Woolf later published Three Guineas, an essay arguing that if women occupied positions of power there would be less war.

Woolf's two half-brothers Gerald and George died in the mid 1930s. She revealed in a memoir that they molested her and half-sister Vanessa when they were children. Some Woolf biographers have suggested Woolf's breakdowns were influenced by this sexual abuse.

Woolf was criticized for her anti-Semitic views. Early in life she wrote about Jewish characters as being dirty and physically repulsive. A passage in her diary read, "I do not like the Jewish voice; I do not like the Jewish laugh." But after marrying the proudly Jewish Leonard Wolff, Virginia's outlook changed. She acknowledged the mistakes of her early ignorance and wrote, "What a snob I was for they [Jews] have immense vitality.” Woolf and Leonard feared the rise of 1930s fascism. After Britain's entry into World War II in 1939, the Woolfs appeared on Hitler's blacklist. They made plans to commit suicide if England was invaded.

During the Blitz of 1940, German bombs destroyed the Woolf's London home and the offices of Hogarth Press. The couple took refuge in Monk’s House. Woolf completed her final novel Between The Acts in 1941. Stressed by her work and the war, she fell into a deep depression. She was unable to write and feared she would not recover from her mental illness.

On March 28, 1941, Woolf donned an overcoat, filled her pockets with stones and walked into the River Ouse behind her home. She left behind a suicide note for Leonard. "Dearest, I feel certain that I am going mad again. I feel we can't go through another of those terrible times. And I shan't recover this time. So I'm doing what seems the best thing to do. You have given me the greatest possible happiness. I don't think two people could have been happier till this terrible disease came. I can't fight any longer. What I want to say is I owe the happiness of my life to you."

Woolf's body was discovered three weeks later. Leonard had Woolf cremated and the remains buried under one of two oak trees in their backyard that they called "Virginia and Leonard." He placed a stone tablet on the spot engraved with the final lines from Woolf's novel The Waves. "Against you I fling myself, unvanquished and unyielding, O Death! The Waves broke on the shore."