Bawling while kayaking could be a thing. 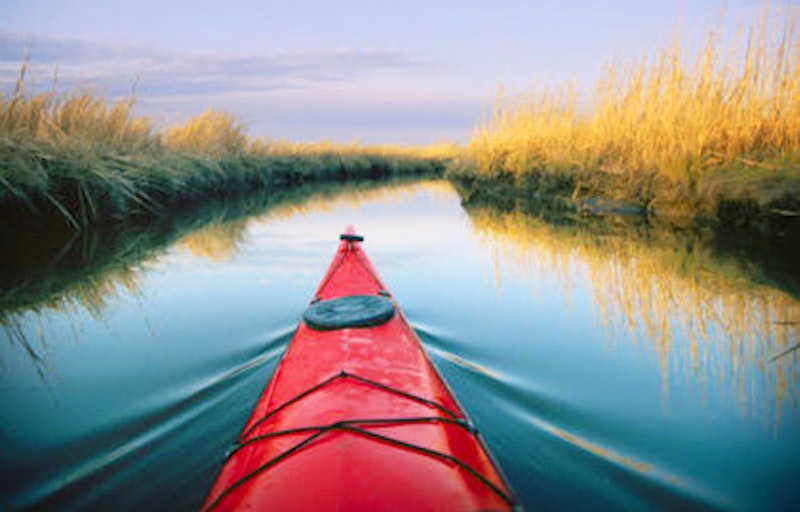 After my dad’s recent stroke, I was alone at my island writing spot working on a novel—a peaceful experience, but surprisingly emotional. I’m already sort of a crybaby, mid-life hormonal mess as a baseline, but apparently facing the possibility that something might happen to dad really cued up the waterworks and I didn’t even realize I’d been holding them back. “Handling it bravely” in front of kids and family and friends had officially been replaced by crying hysterically while kayaking in the Chesapeake Bay. Pile on the creepy but true fact that some random sea glass finder (versus hunter; there’s a difference) wannabe actually stalked her way to my island from two states away to try to find my beach.

So I now call it cryaking. I think it could be a thing, like some hippie-weirdo therapy where you go out and “keen” like the Irish, but while floating. Like a water birth, but for your pent-up tears and emotions and resentment and exhaustion.

When I went out cryaking it wasn’t a day anyone should be out in a kayak, but I had a need to get to my happy place. The15-mile-an-hour winds were far too high on top of a post-storm tide surge that featured whitecap waves on a normally calm body of water. A smart kayaker would have stayed in, I don’t even own a lifejacket and I was kayaking alone. Dumb.

But something made me want to face those waters, and it wasn’t just Normandy-style defense of the nature sanctuary shoreline on private property where I have permission to hunt for sea glass.

Two years ago on my first kayaking trip, I went out on the water with an Iron Man triathlete expert; someone I’d never met before. The Bay was white-capped, the wind was high. A new kayaker shouldn’t have been out there; hell, an experienced kayaker shouldn’t have been out there. I immediately flipped my boat. We went out anyway—I didn’t even know enough to be scared. An hour later, I was alone about a half mile from shore; she’d left me behind. I’d been flipped out of my boat and sucked far out by the powerful current. I’d lost my life jacket trying to get back into the boat.

There was a woman on the shore who I recognized from the beach we’d kayaked to; I’d only just met her—she was wearing a bright yellow dress. As I floundered alone in the Bay trying to hang on to the paddle and the boat (the water was probably 20 feet deep and I wasn’t strong enough to have leverage to pull myself back into the boat; each time I tried, the kayak rolled like a log), I could see her on the shore. Horrifyingly, as the current pulled me, I watched her become smaller and smaller until her yellow dress was just a speck. But she never left her dock. I knew she was watching me. I told myself that no matter how exhausted I was, I had to find the strength to swim against the current, boat and paddle in tow (in retrospect, I should have let them go, but they didn’t belong to me) and make it to shore. I wanted to give up, to let go. Every muscle in my body screamed. I thought about my year on the swim team in ninth grade. I thought about my kids. I thought: this is how people drown even when they know how to swim.

When I finally reached the shore about an hour later, I tried to climb out of the water onto the dock of the yellow dress woman (Cindy, my heroine). I couldn’t even feel my arms anymore. They had to drag me out. I was a half-drowned rat.

Took me a year to get in a kayak again, but now I’m planning a kayaking (not cryaking) trip to circumnavigate the island: about an eight-nine mile deal. Not to raise money or get a t-shirt or update my Facebook status, just to do something kinda cool. Getting out into extremely choppy waters—where the spray hits your face, you can taste the salt on your lips and your boat gets a little full from the waves crashing into you? I’m not afraid of that anymore after this recent cryaking day.