Canadians Don't Know How to Use Sidewalks

Or doors. It gets really irritating. 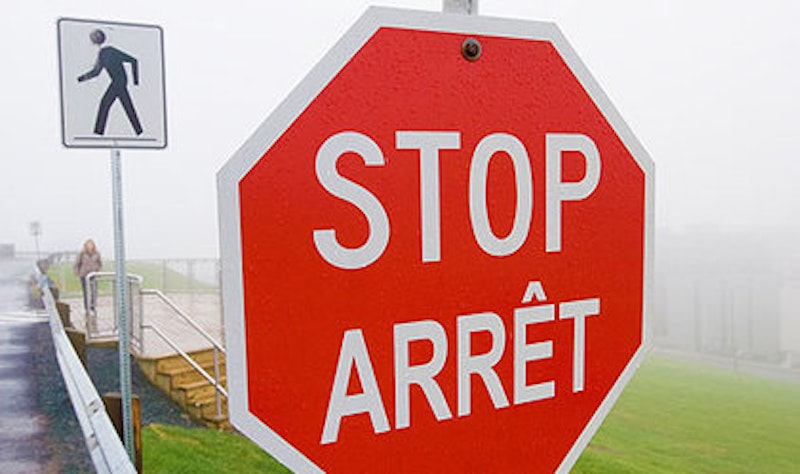 Long ago, back when Brigitte Bardot was still a girl and the Beatles couldn't get a record contract, the renowned man of letters Edmund Wilson paid a visit to Canada. “People here are more polite,” he noted, joining the long train of Americans who’ve made that observation. He went on, more originally, “But the driving in Toronto is terrible.” He wrote that motorists headed toward each other would play chicken and “see which of the two drivers can stop the car first when they seem on the point of colliding.” Why were they headed toward each other? Perhaps the roads were new and didn't have yellow lines.

At any rate, the drivers' response doesn't seem polite; it seems pigheaded and macho (assuming the drivers were men, not women). Wilson took a more indulgent view. “In shops and public places,” he continued, “they have not developed the instinct, as they have in American cities, to keep out of people's way, to move and let people pass. They plant themselves squarely. They do not seem to feel that they have to dodge each other.” I dispute the verb “dodge,” which denotes suddenness. I lived in New York for many years, and people there merely edge an inch or two out of each others' way. They do it without haste and much thought; it's easy and automatic. The beautiful thing is that each person does it for the other. The two heading for collision take a look at the available space, and each allows just enough room for both to pass. It's one of the few things New Yorkers do without making noise, and they do it every time, or almost. I think that otherwise they're afraid somebody will hit them.

Canadians lack that fear, and maybe that's why they're subjected to the eternally recurring surprise of learning that the sidewalk is not their living room. Until reading Wilson's testimony, I thought the problem belonged only to the Québécois. I've lived in Montreal for a dozen years and have yet to visit anywhere else in Canada. The Québécois are fun. Leave Québéc and you stop finding Québécois and start finding Canadians and nothing but. Canadians are okay, I guess, but nobody goes looking for them. As a result, I had no idea that Canadians and the Québécois were both confused about sidewalk use.

Up until now, my theory was that the lovable Québécois are a peasant people not yet broken in by urban existence. They want life to fit them, not the other way around, and as a result they amble toward each other until the choice is collision or a lurch sideways. They also have a problem with doors. For them a door is just incidentally something that people pass through. Mainly it's a place where the world fits about your shoulders and thereby becomes comfortable. You stop there and look around, you size up your smartphone and see what it has to tell you, and you lean in toward a friend so the two of you can talk out an involved matter. When some other party looms near, you start with surprise and get out of the way.

The fit about the shoulders doesn't have to be snug. I saw some Québécois go through this rite with a parking lot. Two men huddled together at the lot's entrance, then swung their heads up because a car wanted to drive over them. Seeing the old tableau transferred to a new setting made me cry out with frustration. “Typique!” I exclaimed. “Typique—Québécois!” My pal Marie-Eve, an angel of a woman, laughed out loud because she had heard me so many times on the subject. The men didn't seem to mind either. They had meant no harm when they positioned themselves in the way of traffic. Didn't think it through, that's all.

In Montreal people can stand on line five minutes at the supermarket and then be amazed when the moment arrives for them to pay. The goods have been scanned and bagged, the total has been rung up, and only then does the customer start to fumble about, searching pockets for the means to secure ownership of said goods. (Pay, pay... how does one pay? With money, but what is money? Where does one find it? Is this money here? Perhaps I should give it to the lady.)

Not everyone in Montreal is Québécois, of course. You find regular Canadians there, plus Arabs, Chinese, Brazilians, Mexicans, many others. But they all have the same set of problems, this bewilderment regarding spatial matters and cause and effect. One person after another. The ones who can manage sidewalks, doorways and supermarket lines are few indeed. In fact there is just one such person, and that's me. I'm from New York. So was Edmund Wilson, and maybe that's the explanation here. Just as New Yorkers have always suspected, the whole rest of the world just doesn't know what it's doing.