Violence Should be Fun

Charles Manson stands as a beacon of unwavering moral commitment to a better world. 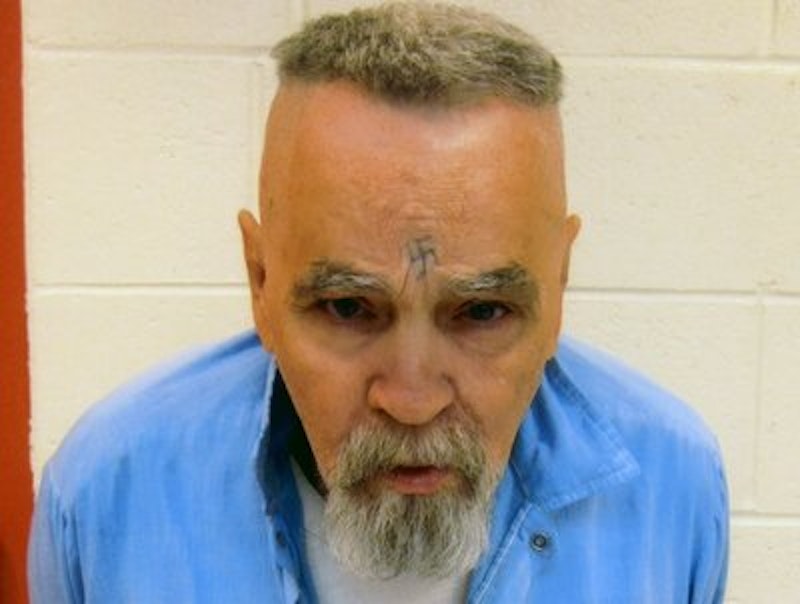 Here in the revolting decadence of 21st-century Weimar America, Charles Manson stands, all five feet four inches of him, as a beacon of personal integrity and unwavering moral commitment to a better world. He’s having gut problems. After 71 years of prison food, that should be no surprise. Assuming he makes it through this current health crisis, he’ll be 83 in November. I think it’s his attitude that keeps him alive. I’ve long harbored a notion that the Powers That Be are compelled to keep him as distanced from the natural world that he so passionately adores out of fear that his presence in a forest or desert might complete some secret circuit, activating the ancient terrors that kept our ancestors close to the campfire at night.

Manson and Nixon were a perfect match: Dionysus and Pentheus. It’s fairly shocking that no one ever bothered to mount a production of The Bacchae built on this premise. Going back to his trial for the Tate-LaBianca murders yields this gem of a transcript:

SUPERIOR COURT OF THE STATE OF CALIFORNIA FOR THE COUNTY OF LOS ANGELES DEPARTMENT NO. 1O4 HON. CHARLES H. OLDER, JUDGE

THE PEOPLE OF THE STATE OF CALIFORNIA, Plaintiff, vs. CHARLES MANSON, SUSAN ATKINS, LESLIE VAN HOUTEN, PATRICIA KRENWINKEL, Defendants. NO. A253156

THE BAILIFF: No talking while court is in session.

DEFENDANT MANSON: Your Honor, may I suggest that the Court continue to try itself, as it has been doing a very poor job of showing the public any justice. You’ve only shown your force and your power.

THE COURT: Mr. Manson, I order you to sit down, sir Remain quiet during the proceedings so that we can continue this trial. You are now disrupting this trial.

THE COURT: I order you once again to sit down, sir, and stop this.

DEFENDANT MANSON: I’d like to go back to my room and relax. You can handle your own matters.

THE COURT: Sit down, sir.

DEFENDANT MANSON: I find it hard not to do what I’m told because all my life I’ve done what I have been told.

THE COURT: All right, sir. We are going to continue this trial.

DEFENDANT MANSON: Now, your Honor, if you would allow me to maintain a voice, I could probably bring to you the thought that I have done what I’m told.

THE COURT: I order you to stop, sir.

DEFENDANT MANSON: You have been ordering me forever. All my life you have ordered me. You have ordered me to cease to live. You bring me in here and you charge me for murder and you say I have rights and you hold up rights in front of me but you give me none.

THE COURT: If you don’t stop, Mr. Manson, I’m going to have you removed from the courtroom.

DEFENDANT MANSON: Okay. That’s all right. I’m not here anyway. You can put a picture up here and prosecute yourselves. Because that’s all you’re doing.

THE COURT: Are you ready to proceed now, sir?

DEFENDANT MANSON: I’ve been ready to proceed. May I ask the man some questions?

THE COURT: No, you may not.

THE COURT: We are going to go ahead now.

THE COURT: Remove Mr. Manson from the courtroom.

DEFENDANT MANSON: Have a good day. I will. Every day is a good day for me.

I’m not certain that Euripides could top that. I’m fairly sure that America is overdue for a new indigenous supervillain, and I have a weird feeling that he or she will emerge shortly after Charlie finally discorporates, probably sometime during Trump’s first term. I’m hoping that some enterprising young person will re-manifest the Zodiac Killer, or maybe bring the Joker to life. Aside from the ever-pending nuclear war, the news has been pretty dull lately. Black people are boring. Nazis are boring. War is boring. The fastest way to make anything boring is to bureaucratize it. Violence should be fun. There’s no point in it otherwise. The state must never be allowed to have a monopoly on violence. It’s too intimate.