I fucking hate the subway. 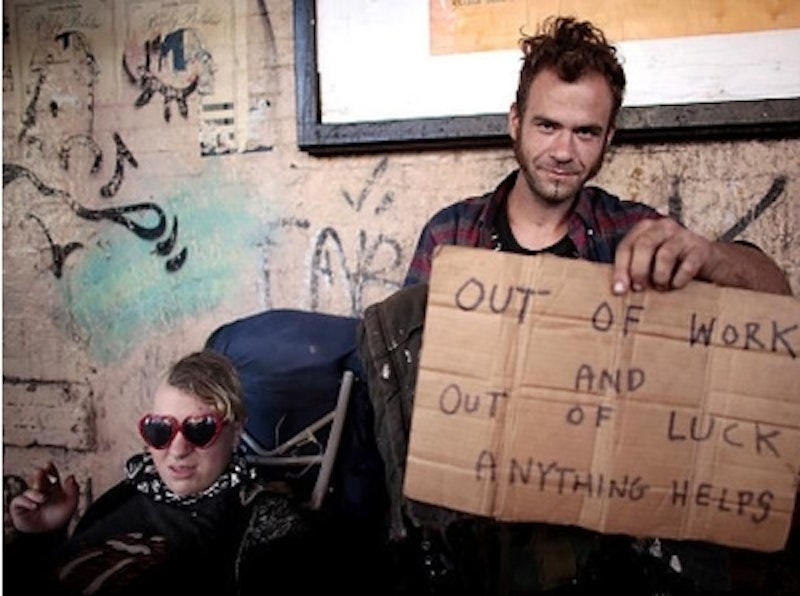 “Excuse me,” booms the loud male voice on the E-train, as it makes its way uptown, “I don’t want to be here having to ask for money.” At this point, like every other New Yorker, I look down at the subway floor to make sure I avoid not only eye contact with the panhandler, but also with the other passengers aboard the traveling germ bank. I don’t want see either their looks of unified understanding or passionate hate for being interrupted while fiddling with their tiny electrical devices that have pretty colors flashing.

“I wouldn’t be here if I didn’t have to be,” the voice continues as I notice a gob of phlegm on the floor directly below an older Chinese gentleman who has yet to learn that spitting inside or even outside in public places is frowned-upon, just like the taunts I get when in Chinatown about how my Yorkshire Terrier would be a “small lunch” for their bloated Buddha bellies.

“You see, I am a veteran just back from Afghanistan and…” At this point I decide to look up at the panhandler and other passengers. I notice others doing the same thing. Maybe we’re all not that different.

“I have had to wait now two years to see a doctor at the V.A. You see, I am suffering from PTSD as well as other ailments that render it almost impossible to work as I can’t concentrate because I keep seeing the faces of…”

I stop listening to the man in the distressed green army jacket and shaggy brown hair with black half-circles under his eyes that are so dark they look painted on. I’m reaching around to a back pocket to take out my wallet where I keep my bills, which is attached to my keys by a chain that hangs from a horse-hook on a flimsy denim belt loop.

“My friend’s face was gone and I had to tell his mother,” I hear him say as I try desperately not to listen. I want to give this man whatever I can afford from my wallet and shut up.

After the vet finishes his pitch, he walks around the train car looking everyone in the eyes as he holds a coffee cup up in front of them. Most, surprisingly to me, return their gazes back to the floor while I give the guy some crisp bills and tell him, “I’m so sorry.”

“Thanks,” he says, with a sense of camaraderie after he looks into my eyes. As I step off the train at the 50th St. station for my weekly physician appointment, I begin thinking maybe we aren’t all that different. I wipe my face with my shirtsleeve to clean it from the dust and grime and am surprised to find a few teardrops there as well.

I fucking hate the subway.

As the sun hits my light blue eyes, which now feel like they’re on fire, I’m glad I’m wearing my transitional glasses. Soon that glare will go away and I’ll be able to see clearly. Even through the continued moisture from my eyes. I walk a block north on 8th Ave. toward my doctor’s office on 52nd St., when on the northeast corner, I see a couple of fellow punk rockers seated on the ground with their sort of mangy Golden Retriever.  As I get closer I see that the guy is sporting a wilted Mohawk, and the girl, torn fishnets, a raggedy leather jacket and a crass t-shirt. Forgetting I’m now in my mid-50s, I ask them what’s going on, and are there any good shows coming up. They both don’t say a word but lead my eyes with their eyes to a cardboard sign they’ve propped up in front of them.

It reads: “Vegans. Please help us feed ourselves and our dog Jello Biafra. We have left our fascist parents back on Long Island. We need money for beer and food. Any little bit will help! Also any food would be god to. [I think they meant to write “good.”] But please remember, we are Vegans, so NO MEAT. Death to corporate America and Ronald McDonald. Kill all cops!”

After reading their sign, looking at them again, and then back to the sign, I break out in hysterical laughter. The summer camp squatters look stunned. “What’s so funny, old man?” says flaccid mohawk. Old? I think. Fuck. I am wearing my black denim copy of a motorcycle jacket with the U.S. pins on it and a Ramones button along with an American flag. And my sleeves are rolled up due to the humidity incubating the germs from the moving storage bank below.

“I’ll have you know that I was playing punk rock, like with The Ramones, probably before you were even born,” I scream at the little shits, not quite really understanding why I’m so angry all of a sudden. “Go away, Grandpa,” the girl says, “you ruining business.”

Business? This was business? Asking for money from people on the street so they can feed their dog veggie burgers, drink beer and live in some dirty squat for the summer before running home to mom and dad when it gets to cold. Only to return the following year with a new outfit from Hot Topic. Fuck these kids.

“You know what?” I say, “I just saw a guy who REALLY NEEDED the money. I’ve seen lots of people who really need money. And you’re taking it from them. Every penny, nickel, dime, quarter, or dollar bill dropped in your coffee can takes away from those who could really use it. Real homeless people. Did you ever think of that?” I scream.

“We don’t want anything less than quarters or bills. We throw the small stuff down the grate. Too hard to buy a 40 that way.” Too steamed to see any humor in this situation, I wish the dog well and walk quickly away from the kids who snicker behind my back. By now my glasses are turning a dark gray and it’s getting easier and less harsh to see. As I cross the street and make a right onto 52nd St., I’m stopped by a guy who has that fine New York Homeless smell of urine, shit, wine, and newsprint. He asks for some money and as I dig through my pocket to give him whatever change I have, I can’t help but tell him about the little squatter punks down 8th Ave. a bit, asking for spare change, or “Spanging” as they call it.

“You know what?” asks the old man. Before I can say anything he says, “It was better when they all stuck around St. Mark’s Place and that area. Near where they stayed.” I nod my head to agree with him, in shock he even knows that. “Listen Young Blood,” the guy says to me, automatically making me feel better, “there are always going to be people that take advantage of any situation. But you just roll with the punches. Or on St. Mark’s Place,” he continues, “Godzilla Roll with the punches, and some sake, too.”

I drop the change in my right hand back in my pocket and reach around to open my wallet and to give him my last 20. A hell of a lot cheaper than the therapy appointment I had the next day, and much more satisfying.