Understanding the Past in Fierce Enigmas

Raghavan’s adept at explaining the tensions of the time. 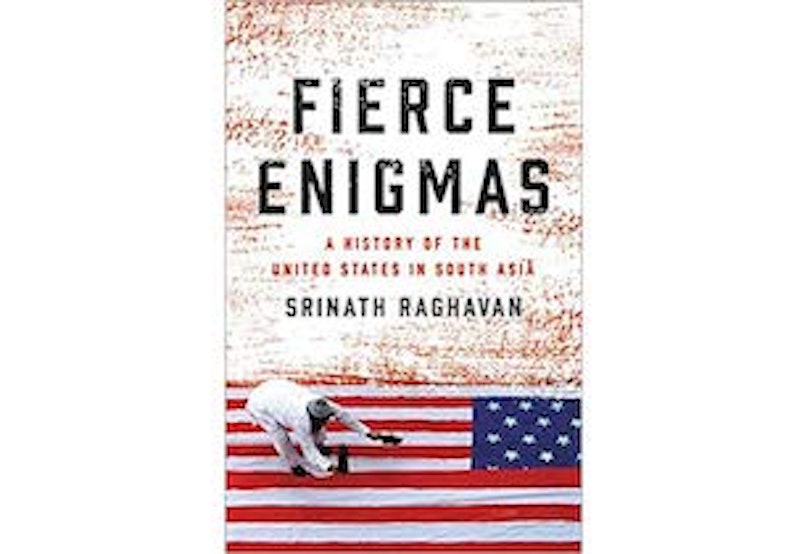 It’s tempting but wrong to say Srinath Raghavan’s recent book Fierce Enigmas really begins 379 pages into its 415-page length. The book’s a history of American relations with South Asia, here effectively India, Pakistan, and Afghanistan. An introduction begins with a brief discussion of an incident in 2016 on Pakistan’s border with Iran, but chapter one goes back to the late-18th century and proceeds forward chronologically from there, reaching September 11, 2001 on page 379. That’s the point where the region really becomes central to American policy, and it’s tempting to read the book with that date, and the last 18 years, in mind.

That’d be a mistake. Raghavan makes an argument that the last couple of decades of American involvement in Afghanistan, and by extension also American relations with Pakistan and India, can’t be understood as purely about the current moment. These situations are defined by America’s history in the region, perhaps more than most American policymakers understand. Raghavan’s writing about the long term.

The 18th and early-19th centuries saw a surprising amount of trade between the new United States of America and British-controlled India. It also saw Americans telling each other tales about exotic wonders in a part of the world they knew little about. As time went on, American relations with the region were increasingly shaped by the American relationship with South Asia’s colonial occupier Britain. World War Two saw a period of unusual tensions; Britain was a necessary ally against the Axis powers, but many Americans, including the Roosevelt administration, were to some extent sympathetic to Indian desires for independence.

America’s own history as British colonies was relevant, particularly in the minds of the Americans. But South Asia was not vital to American interest, and American racial hierarchies encouraged paternalism and condescension as well as outright racism. America as a country was more concerned with its relationship with Britain, still a world power.

That sense of South Asia as almost an afterthought to American foreign policy is a major theme in the book. India won its independence as the United States was taking a more prominent role in establishing the post-war global order, but that meant that America’s focus was increasingly on Russia and then China. Individual Americans often recognized the importance and potential of India, with its vast population, but the Cold War found American foreign policy aligning with Pakistan—which was less leery than India of the American brand of free-market capitalism, and practiced a religion American Christians could understand more easily than Indian Hinduism.

Raghavan’s adept at explaining the tensions of the time, and getting at the complexities of the five-way tensions between America, India, Pakistan, China, and the Soviet Union. If Afghanistan’s something of an afterthought, he does describe how the conflicts and diplomacy among the South Asian nations affected their relationship with the United States. Notably, while their interaction with the United States is the point of the book, he writes largely from the perspective of India and South Asia more broadly.

The story Raghavan tells is one of an area that can’t help but be important due to the size of its population, and of a young empire that has no idea what to do with it. Therefore it’s a story of the limits of empire; a story about what American foreign policy can’t do. Shaped by prejudices and economic ideology, American diplomats and politicians were (and are) continually frustrated by the subcontinent’s stubborn insistence on being itself and doing things that were (and are) not always in accord with what’s best or normal for the United States.

The prose is solid, and though not sparkling Raghavan’s got a good eye for telling quotes that bring character alive. That’s important, as Raghavan has to fit a lot of history and leaders into his book. He does it clearly, an accomplishment in itself. And he makes the point that in looking at the way the United States dealt with a region it considered peripheral, one can learn about America’s own situation in that moment—its self-identity, its role in the world, the growth of its power and ambitions.

Still, Raghavan doesn’t quite cover everything. His introduction promises to deal with culture as a “major dimension of US involvement in South Asia… in particular religion, race, and notions of hierarchy.” These are mentioned but not explored in any depth. That’s understandable—the subject demands a book in itself. But along with a very cursory treatment of the interchange of popular culture, it feels like a void.

This is more a question of Raghavan overpromising than a lack in the argument of the book. If he hadn’t mentioned culture and popular culture in the introduction, it wouldn’t be an issue. The book succeeds at making its point: areas of the supposed periphery can reflect on empires that ignore them. Preconceptions are inevitable, but even an empire can only afford them up to a point.

And sometimes those areas abruptly gain in importance, militarily or economically, as South Asia has since the start of the current century. What happens then will still be determined by what has gone before. So Raghavan’s history of two very different parts of the world dealing with each other becomes more argumentative when it talks about times close to the present, but the heart of it is in the years before that. To understand the present requires understanding the past: one of the classic arguments for the study of history is illustrated here, and illustrated thoroughly.