Tomorrow Is So Last Week

Nobody really knows the answer why. 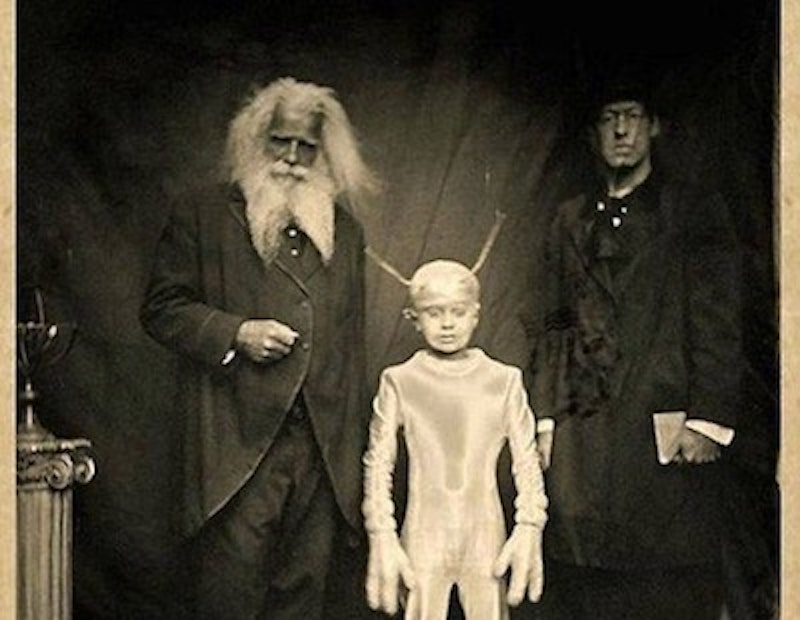 No time like today to spare the indignity of running out of time and valuable resources while taking up prime outer space. The entire cosmos inside your head is but a fraction of the whole story. A construct of half-baked ideas. Put yourself into the oblivion of choice. Adventures in space without leaving the comfort of your bed. In total respite for today and probably tomorrow. Relax. Yesterday was so last year. It's the age of the ageless. Time forgot to tell us.

To be or not to become just another extraterrestrial fashion casualty. A relic from another time yet to happen. An alien leftover from wholesale planets and lost civilizations somewhere in the backyard. Wearing last season’s spacesuit. An intergalactic nomad wandering aimless around the house. Bumping into walls with your helmet on. Enter a portal to a new closet dimension. Write your own ticket. Get your own UFO agent. No one’s getting out of here, dead or alive. Maybe switch universes and turn up missing in the next one only to reappear in some other place centuries ago or later.

Call it a day after long goodbyes of yesterday’s calendars. Such a long dry spell. Many ions pass in a few ticks. Time for this one to go home. Hello again. The freshness date has an unknown expiration and a best if used by clearly marked. Years are meaningless. The eternal battle of fresh new worlds to dwell in. Looking good between coffee breaks with inter dimensional beings. Punching the clock. Take a break. Emotional timeouts. This is the umpteenth time you’ve been late today. What to do about it and nothing to show for the effort. A paltry paycheck and floating weightless in your cheap imitation knock-off atomic uniform. So high up there everybody down below looks like insects.

A continuum  of never-ending endings. Over, in, round and out of orbital revolving doors. Enter to exit, exit to enter. The repeating journey of time wondering clock-watchers. The thrill of moving at light speed or floating perfectly still, screaming in a silent dark void of space. You know no one can hear you. Afraid to move forward and too scared to turn back. Stuck in random moments like a bug trapped in amber resin. Just another frozen ghost in time on display. Inching along the way, jettisoned a bit closer to mass extinction. Dinosaurs of infinite demise transcend primates. Beasts walk the planet. Monsters rule the earth.

Scavengers must hunt for survival. Search for sustenance. Dog-eat-dog, cat-eat-rat. Humans eat everything. Seeking life from the roadkill of indifference. Doing a timeless two-step dance to the next moon diner. Laser beams cut the sky open. Stars bleed. Electric air burns. Showdown at high noon. Shoot those ray gun hunters out of the Milky Way or fly that spaceship to crash and burn. Crawling from the lunar crash site intact but worse for wear. Adapt and mutate. Just another crater. Protecting a life of unfinished business. Hope to get out of the airlock chamber. Take a meteor shower. A drag-out, knockdown this spin round the ozone. Ricochet slingshot into a black hole. Like a pool shark shill playing eight-ball. The control panel is smoking hot sparks everywhere. The solution to the problem creates exciting new catastrophes in the solar system.

It's in the question mark at the end of a cosmic mystery sentence. No viable answers available to sustain life without oxygen. All suffering’s an extent of educated guesswork. Nosy busybodies in hope of some relief from the tortured prison of being. So damn happy to be free from mental confinement. Locked in a starry firmament paradise. Free to roam across the fenced-in universe. Reaping the rewards of well-lived lives as super astronauts. A ceremony for the spacemen who gave their lives discovering brave new worlds. Place a metallic wreath on the space capsule and put the fun back in funerals. Arrive late, in love and drunk. That’s the way to go. It sounds so alien. Buried in space. Nothing human is alien to me. Shot into orbit to float in a circle forever.

Fall into a wormhole zipping into and out of existence. Here, then suddenly disappeared. A prototype for a fresh reality not yet tasted. The known is renowned to the unknown. A blinking dot of light on the horizon. Where life and death are one in the same breath. When the gods’ laughter is longer than the millennia spent adrift. Rudderless wandering around inside the darkness of a skull. Just one less life living the life yet lived. Tattered sails flapping.

Add it all up to subtract the total amount of no time spent catching up to the empty hourglass sans sand. A quantum tinkerer with the mechanical flaws of gravitational physics. Breaking all the rules of relativity, the theory of everything, and the myriad equations of thermodynamics. Traveling faster than the speed of light and sound. Decoding the songs of the spheres in your Rocket Command Center. Arriving before leaving on a journey along new vistas. On a quest for true meaning in a meaningless void with no time to spare. Walking around without a clue. Nobody really knows the answer why.

Beam me up baby. You can pontificate later with overeducated speculation. Each dimension unwraps another entire lifetime at various stages from birth to rebirth. Before inception and after dying. Unraveling the fabric of endless wrinkled dimensional realities. Second-guessing the game. Hidden deeper than spiraling DNA. Beyond dust and dirt. Beyond news and weather reports. Layers of distorted truth stacked like bricks without mortar. It all falls down. Sand castles tumbled in solar wind. Zero gravity is so heavy.

A solitary witness as it all crumbles into sea space. Blown away in the present tense of underwater subterranean loneliness. An out-of-body molecular experience reckoning with the forces of nature and loss of common sense. All is visible through the telescopic eye. Alien intelligence drunk on automatic pilot. Strange beings from the future fumble beyond the stars with clunky robots. Twinkling lights above the horizon. See the constellations on display at the edge of humanity. Floating out of whack. Where heart and soul join diode and microchip. Our own little green men.

Storefronts boarded up at the edge of the docking station. They sold out of time. Radioactivity looks pretty good on you. That emerald-green glow around the gills. A bold statement. Remember to forget the fact of having been there before. Already here after leaving again, arriving simulcast on a multi-schedule timetable. Catching up with the future.

Been there. Stepping in tomorrow. Done that. Scrape your boot. Repeating yesterday's promise. Stepped in it again. It isn't what it used to be. Space is funny that way. Blast off. To have all the room to roam around the universe. There's no past like the present. May all your tomorrows be today. What's the hurry? I'm there already, always just arriving. I'll leave behind a talisman, some trinket of a glorious history not yet lived. So you’ll know of my existence. Space is crazy. Lost in my own skin.