Those of us on the Left need to do a better job talking about Israel. 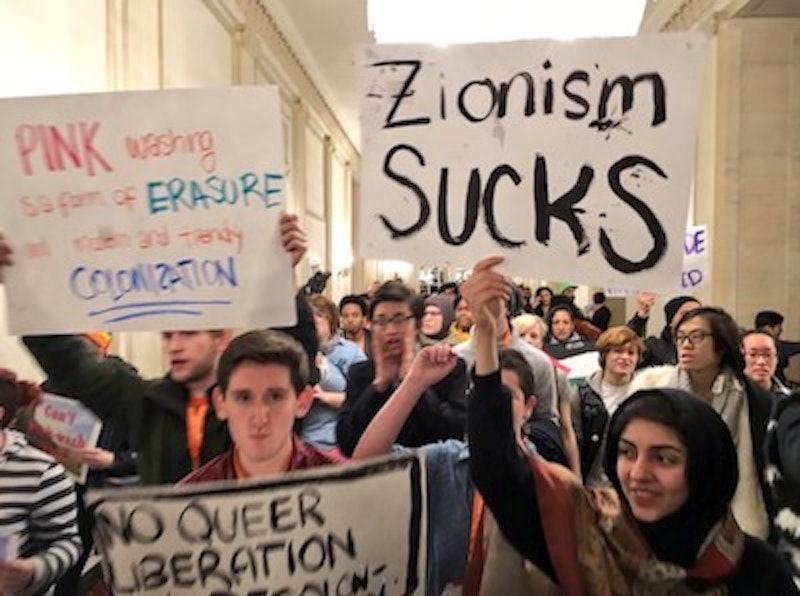 I’m co-presenting a workshop on humanist LGBTQ activism with my friends Diane and Ashton at this year’s Creating Change conference. This will be my second time attending and presenting at the conference, and I’m looking forward to seeing all my LGBTQ activist friends again. Creating Change was the first conference I ever attended without having to explain either my sexual orientation or gender identity to anyone; the only question about my gender was, “What are your pronouns?” Unfortunately, going back to Creating Change also means revisiting the #CancelPinkwashing controversy.

During the 2016 Creating Change conference in Chicago, a protest erupted in response to the conference’s inclusion of the pro-Zionist LGBTQ rights group A Wider Bridge. According to the Electronic Infada, Alex Shams and several other Palestine solidarity activists “attempted to gain access to the room where a reception for... A Wider Bridge was being held.” The reception was shut down, and many activists marched through the hotels where the conference was being held to protest pinkwashing, which, according to Palestine solidarity activists, is when Israel uses “LGBTQ issues to distract from Israel’s occupation and abuses of Palestinians.” Many activists documented the protest by posting pictures and videos from the protest on social media using the hashtag #CancelPinkwashing.

Despite the overwhelmingly peaceful protest, several saw the protest as anti-Semitic, and last year Creating Change rejected all workshop proposals about the Israel-Palestine conflict. This created a lot of tension during last year’s conference. Two “guerrilla sessions” about pinkwashing were held, which I didn’t attend. All I know is a pro-Zionist trans woman wearing an Israeli flag like a cape plopped down on the floor in the middle of these two sessions, tweeted that criticizing Israel’s politics is inherently anti-Semitic, and allegedly threatened to call the police on a black trans man.

Despite what The New York Times’ Bari Weiss and Bret Stephens might write, saying that Palestine has a right to self-determination doesn’t mean Israel doesn’t have the same right. Being against both Israel’s political policies and Hamas is not a contradiction. Even the pro-Israel organization J Street is vocally against the West Bank Occupation, and calls on the US government to denounce the illegal settlements.

I do agree with Weiss and Stephens that some criticisms of Israel are full of anti-semitic dog whistles. For example, there was the 2017 Chicago Dyke March where a gay pride flag with a Star of David on it was considered explicitly anti-Palestinian. Then there’s the recently elected Ilhan Omar who once tweeted, “Israel has hypnotized the world,” which makes me think of the Happy Merchant figure plotting for world domination. Roger Waters of Pink Floyd once compared the actions of the Israeli government to those of Nazi Germany.

This is why those of us on the Left need to do a better job talking about Israel in the aftermath of the Pittsburgh synagogue shooting. While there’s currently debate about whiteness and Ashkenazi Jews (I’ll let Rebecca Pierce and Chanda Prescod-Weinstein speak on that topic), the Alt-Right doesn’t care. They want to murder all Jews, regardless of whether they’re white or of color, so we gentile Leftists need to make it clear we stand in solidarity with Jewish people.

Sam Kriss of Vice UK wrote an article in 2016 that has some great suggestions. Don’t be like Waters and compare Israel’s political policies to Nazi Germany. Other suggestions include not saying, “Palestinians are Semites, too” whenever someone calls you out on anti-Semitism, and avoid the terms “The Jews” and “Zionist Media.”

It’s also important to note that Jewish people have a wide variety of opinions on Israel. Some say criticizing Israel’s political policies is inherently anti-Semitic, some are pro-Israel but anti-Occupation, and some are anti-Zionist. Holding all Jewish people accountable for Israel’s actions is just as bigoted as holding all black people accountable for Louis Farrakahn.

Such dialogues are possible. One day during last year’s conference, I was eating lunch in a hospitality suit with fellow bisexual activists, and the topic of the 2016 Chicago protest came up. Two activists at my table, Lorraine, and Lynette, started talking about how peaceful the protest was, and they were just against Zionism, not Jews. A young woman at the table named Sarah said, “I kind of consider myself a Zionist.” Tension fell upon the table. When asked for clarification, Sarah said she believes Israel has a right to exist because of the history of anti-Semitism throughout the world, but also made it clear she was against the West Bank Occupation. Lynette, Lorraine, and I agreed. Even though that conversation started out uneasy, we were able to talk about anti-Semitism and Israel in a productive way, and had a better understanding of each other in the end.