A Short Trip to Morris Park 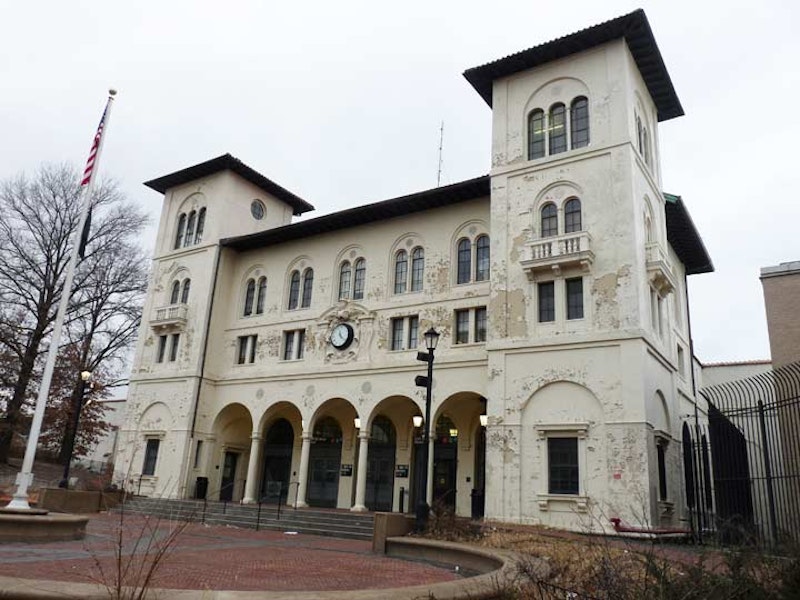 Morris Park, located in about the exact center of the Bronx, appears to be one of the borough’s most stable and long-standing neighborhoods, but it’s only a few decades old and occupies what used to be a vast racetrack. Many of NYC’s more “stable” neighborhoods, such as Sheepshead Bay, Brooklyn, are located where the ponies used to run and automotive pioneers raced.

The name Morris turns up a number of times in the Bronx, primarily from two different families: the Revolution-era Morrises: Richard, who arrived in the 1660s and first settled the South Bronx; Declaration signer Lewis, US Sen. Gouverneur, and Robert, who was a three-term NYC mayor in the 1850s.

The Morris of Morris Park was John A. Morris, whose Westchester Racing Association acquired 152 acres in 1888 on the outskirts of the old Bear Swamp and built a racetrack and clubhouse there. As opulent as the racetrack was, though, it was in operation from only 1890 to 1904 (though a vestige of horse racing in the area, the Track Restaurant and Tavern, held down a corner at Eastchester and Williamsbridge Rds. some distance from the old track until 1957). The track itself burned to the ground in 1910.

In 1908, the abandoned racetrack became the world’s first formal airfield and the American Eagle, the largest dirigible in history to that time at a full 105 feet in length, was built there, and one of the first gliders, piloted by 17-year-old Lawrence Lesh, was launched from the former track that year. And, in the early-1900s, the old racetrack was also used for speed and endurance races for the newfangled automobile, and a young Swiss driver named Louis once won a gold watch for driving a Fiat a the-record 52.8 MPH there. The driver, along with his brother Gaston, competed in many road races at the Morris Park track and Gaston won at Indianapolis in 1920. Of course, it was Louis Chevrolet (1878-1941), who ironically sold his share in the Chevrolet Motor Car Company he founded in 1911 to original partner William Durant in 1915, and returned to the racing business, as well as aeronautics. (The gold watch he won had been donated by Walter Chrysler.)

It wasn’t until the 1920s that streets were cut through and houses constructed; the neighborhood was not “completed” until the 1970s!

The building above at E. 180th St. and Morris Park Ave., which exhibits an air of faded magnificence, was constructed in 1912 as a grand Italian villa station for the New York, Westchester and Boston Railroad that operated between the Bronx and Westchester from 1912 to 1937 (it never made it to Boston) and was subsequently sold to NYC and became the Dyre Avenue Line.

It currently serves as a simple portal for the E. 180th St. station, serving the #2 and #5 trains. Though it was renovated in the last five years, receiving a new gleaming white paint job, the lowest bidder strikes again, and the paint job is already peeling off. 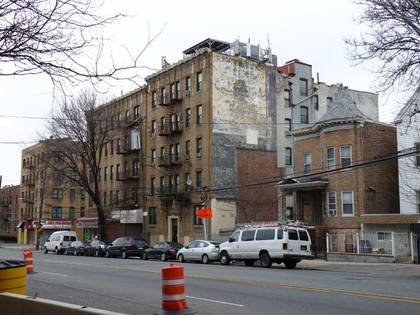 US Representative Paul Fino (1913-2009) was elected to the State Senate from 1946-1950 and elected to Congress in 1952, where he served eight terms, and then the State Supreme Court in 1968. He was known for his staunch opposition to Mayor John Lindsay, who he considered too moderate. In 1972, he sentenced a 17-year-old to 30 years in prison, who’d been convicted of selling one-seventy-third of an ounce of heroin.

This painted sign on Morris Park Ave. and Adams St., one of two surviving campaign ads for Fino, was likely made in the 1960s for one of his State Senate campaigns. 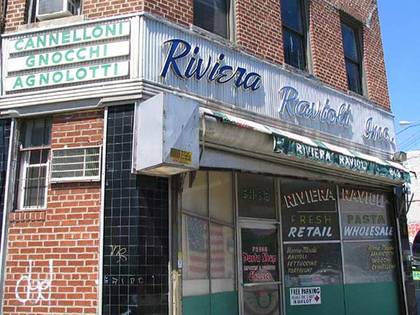 Unionport Rd., connecting Bronx Park and the old Bronx town of the same name (now a part of Castle Hill), runs past Morris Park Ave. and officially divides the neighborhoods of Morris Park and Van Nest. (Unionport was originally a sheep pasture and the road has been called Sheep Pasture Road in the past.)

Lost to history now, on the southwest corner of Unionport Rd. and Morris Park Ave., was this long-standing pasta wholesaler. 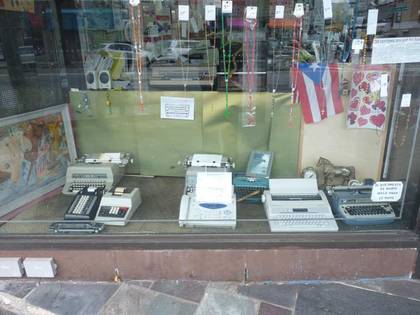 The wheels of technological change grind slowly in Morris Park. E.S. Business Machines, 707 Morris Park Ave., east of White Plains Rd., still promotes its typewriter repair service prominently in its display window, and the awning (which appears as if it was constructed recently) touts fax service and cash registers, as well. According to Baruch College, owner Sam Vasquez, born in 1937, has owned and operated the store in Morris Park since the 1980s, and before that in lower Manhattan. While praising the new computer technology that largely eliminated typewriters, Vasquez claims he still gets adequate business from young writers who wish to compose the old-fashioned way. I still have my 1940s Remington, and keep it around in case the grid fails. I need a new ribbon, but now I know where to find one. 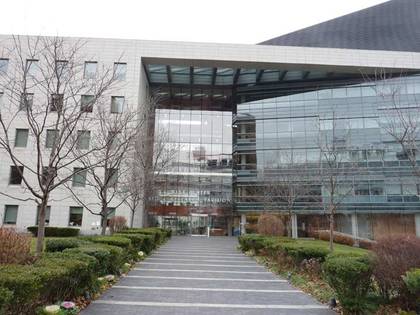 Eastern Morris Park is the borough’s Hospital Row, as Jacobi Medical Center, on a vast plant between Pelham Parkway, Eastchester Rd., Morris Park and Seminole Aves., is the Bronx’ largest public hospital. Also in this stretch are the Belfer Institute, the brooding Albert Einstein College of Medicine, the airier Michael F. Price center for Genetic and Translational Medicine (shown above), Bronx Psychiatric Center, Montefiore Medical Center on Eastchester Rd. and Calvary Hospital, where my father rested comfortably in his final days. 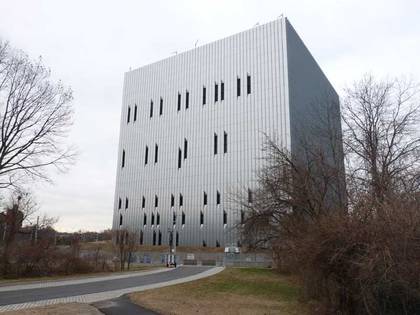 On the outskirts of Morris Park, at Stillwell Ave. and Pelham Parkway, you find this stolid structure, opened in 2016, that resembles Star Trek’s Borg Cube, or perhaps the Ministry of Truth from 1984. In fact, vital business is carried on here. You may be aware of the TV show 911, which follows the lives of emergency service workers in Los Angeles. This building, PSAC II in the Bronx is where over 11 million 911 calls for the NYPD and FDNY have been fielded, joining PSAC I at MetroTech Center in Brooklyn. It’s one of the most heavily protected and secured buildings in New York City, constructed of concrete clad with silvery aluminum panels. The building is nearly windowless, but workers inside—who have a stressful task—enjoy the benefits of walls in the lobby and cafeteria lined with plants that partially serve as an air filtration system. 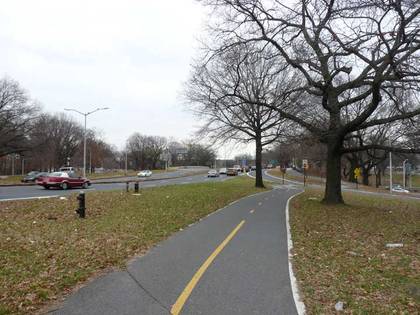 First conceived as part of a greenbelt with Mosholu Parkway in the 19th Century, Pelham Parkway now connects with the Hutchinson River Parkway and New England Thruway as a motor conduit to the northeast. But something amazing has happened in recent years, as NYC has added miles of walking and bicycling paths along the parkway that stretch northeast to Pelham Bay Park and Co-Op City.