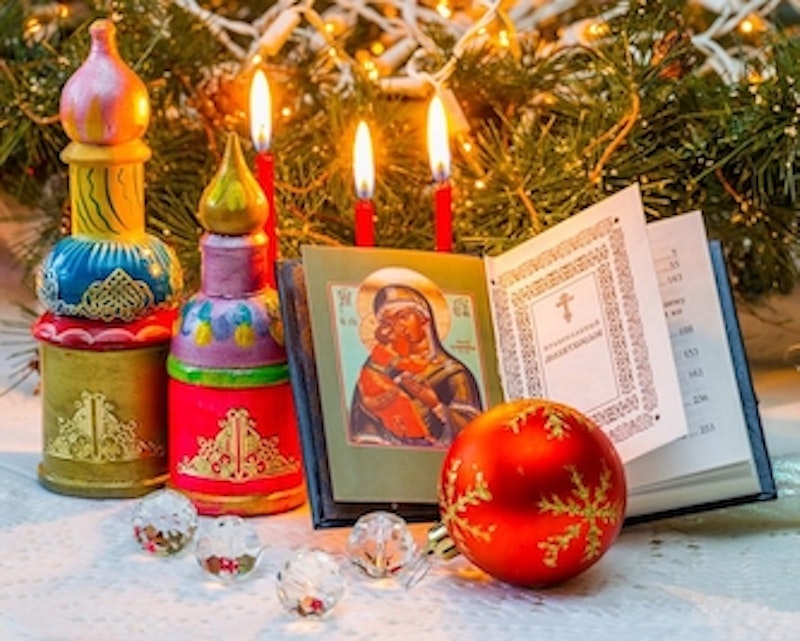 So resounded the antiphonal chant in our little Russian Orthodox mission church here in Indiana as, starting late on Christmas Eve and stretching into the spiritually charged early hours of Christmas morning, we celebrated the component liturgical services of the Nativity of Our Lord, incarnated through the vessel of Mary, the Theotokos.

These services are, of course, the Hours, the Vespers, and the Divine Liturgy of Saint Basil the great. The untrained but passionate voices of our mixed group of native Russian-immigrant and American-convert parishioners strained with joy as we intoned the prayers that call forth Christ’s Coming.

Quivering with veneration, tears slicking down through the wonderfully matted tangle of his plaited beard, Father Nicodemus at service’s end gathered our little congregation about him in the center of the holy premises as he slobbered out the troparion and the kontakion. We then all chanted the traditional Laudatory Prayer for the Pro-Kremlin Chekists, plus the wonderful Anathema for the Fascisto-Homosexualist Liberals and Zionist-Cosmopolite Wreckers. (For which, I believe, Rimsky-Korsakov once wrote a lovely musical setting.)

Then came the final jubilant antiphons:

The Lord will send you the scepter of power from Zion:

Rule among Your enemies.

Raising myself from my knees and brushing the dust off my Christmas sandals, I joined my fellow parishioners in sobbing:

For with You is dominion on the day Your birth

In the light of holiness.

Then the service was done and we dispersed into the Indiana dawn, to gain several hours of sleep before the Christmas feasting.

I was heartened that Daughter came home for Orthodox Christmas this year, her first year away from home, now that she’s attending boarding school in the northern part of our state. I wonder whether her return doesn’t signal on her part a desire to mend fences. This is a desire that I honestly wouldn’t much have expected, so alienated had she become upon sailing into the spiritually perilous waters of adolescence.

But there she was, at the feast table, sitting between Brother Gavin and our honored guest Father Nicodemus. Maybe I’m reading too much into it, but it seems to me that the typically charming “table talk” of our bluff Russian priest (I’ve long thought it would be a good idea to record and publish Father’s “table talk,” as the Nazis once collected and published Hitler’s) was subtly directed at her, and was meant to encourage her to “keep to the straight and narrow.” Readers will remember that she’s at times been a fractious child.

“Today is Christmas Day,” Nicodemus slyly remarked, picking the traditional Christmas wheat-berry porridge out of his teeth with his tobacco-stained finger. “But tomorrow we commemorate not Our Lord himself, but rather the Holy Virgin, when we celebrate the Synaxis of the Theotokos. For it is Mary who is the virgin vessel out of whom the sublimity of the Christ child poured forth. He received His body, His human life, from Mary of course.”

Now he wiggled a sly finger at Daughter. “The veneration of Mary is a most ancient and salubrious Christian tradition. The veneration of her body. Her body. Does the word titillate you? Do you ever grow titillated? Do your fingers wander by night, my little swallow?”

Irrepressible Nicodemus! At that point he launched into a fit of violent coughing, through which he forced some rather tart comments on the recent Russian-hating wickedness of the Ukrainians. This is a topic of the gravest concern—of great geopolitical concern—and one that I will have to write about soon, just as Rod Dreher writes about it with appropriate misery and rage this week.

It was after dinner, meanwhile, that Daughter indicated to me why she had made the surprising trip home for this Russian Orthodox Christmas. The reason had to do with money...