So many people and too many places that’ll be sorely missed. 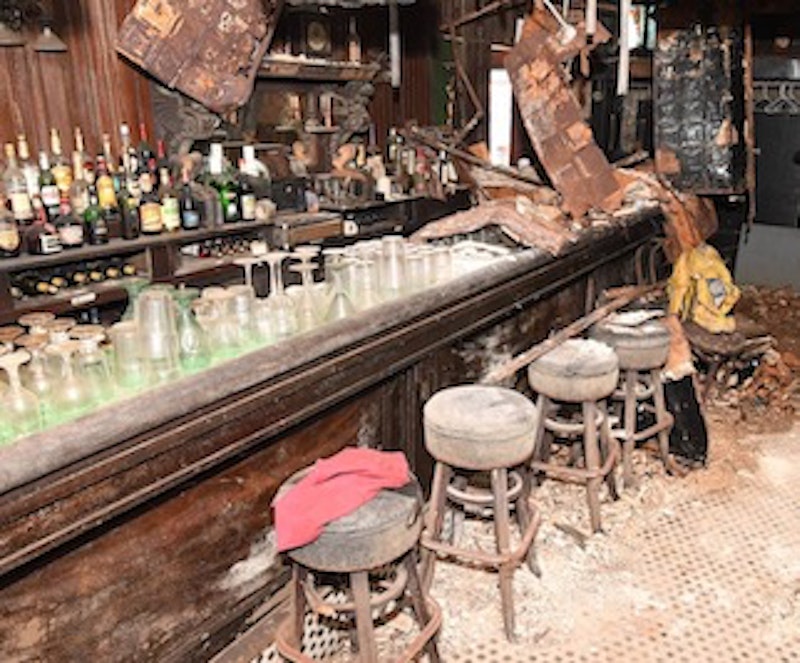 I sat on the last barstool to the left more nights than I can recall at Martick’s in Baltimore. I wasn’t hanging out. It was the usual evening ritual of trying to finagle a beer from Morris Martick after working the dinner shift in the upstairs kitchen. You can’t tell by the above photo but Martick’s had a beautiful old hand-carved wood bar. In the restaurant years it was seldom used and stood like a museum relic. A testament to an era mostly forgotten when writers, artists and the bohemian ilk rubbed elbows with newspaper men, doctors, lawyers, tramps, bums, musicians and poets. Not in any particular pecking order.

Martick’s Restaurant Francais. It had a strange timeless charm with among the best cuisine in the city during its heyday. The photo was snapped after the premises sat uninhabited, rotting for years displaying the state of its eerily glorious decay. Sometimes diners would sit at this bar waiting for seats at a table. New Year’s Eve was one of the few nights the bar actually functioned as one. During the 1950s it was the hot spot for the intellectual set. An art gallery/music lounge. The history of Martick’s goes back even farther than this.

It was one of the few integrated public places before civil rights. Where beatniks got way out with jazz men. Reefer and amphetamine be-bop. Abstract art. Everybody wore black and snapped their fingers instead of applauding at poetry readings. In the 1970s, Morris quit drinking. He frowned on keeping a bar running for a crowd of uncouth besotted regulars after his new restaurant opened. Maybe he thought it was disruptive to the dinner crowd. Who knows?

Mostly, Morris was just done with drinking and all that a proper neighborhood bar is, always the main attraction for drunks. That’s old news. Now there are rumors yet again that the landmark on Mulberry St. at Tyson Alley that was Martick’s is slated for demolition. This time it's probable the walls will fall, seeing the sorry state of the property as it barely stands now. The two-level parking lot next door is gone. A chain link fence surrounds the area where the empty shell sits like a squat modern sculpture in a prison of graffiti, large areas of the walls dotted like quilt work with blurry squares and patches of faded colors mish-moshing the brick face, as surreal as all the real time anyone who was ever there could dream.

The past ravages the present. The building was never much to look at from the outside with its wooden shutters and dingy paint. The inside was where all the magic happened. Behind those walls time froze. There was romance to be had, some comedy, a little tragedy, lots of music, laughter, sadness and tears. The full gamut of culinary delights and endless nights of wonder. The bones of that building may be broken. The roof full of holes. Walls may collapse. It could be condemned and demolished. Yet it’s always a perfect vision in my mind’s eye.

Many of the originals from that era, including Morris, are long gone. Chance meetings and clandestine affairs. Celebrations and wakes. Successful business deals. Shady political lunches. The dance of life. A rough sketch of a crooked smile. Old black and white grainy snapshots of pure joy. A jumbled still life painting. Happy people enjoying better days. They stand like monuments.

Recently another long-running institution from what’s left of Baltimore permanently shuttered its doors. Nick’s Inner Harbor Raw Bar, real authentic fresh seafood. It put the Cross Street Market on the map of faithful patrons and on the radar of out-of-towners looking for the best oysters to slurp and beer to swill. Take a moment to witness the likes and love of people like us. Those eccentric characters you’ll only find there, for example, Donald the Singing Bush. He sang songs on request for a beer or a buck and loved to sing all day into the evening. Anything from Frank Sinatra to the National Anthem. Like too many other local establishments and public houses that have fallen by the wayside, the beer flowed as freely as the laughter and the people that arrive and leave. Places that live in the heart. A seed planted in the minds of people that form a line from a different time in a once proud city by the bay named Baltimore. Always Tinytown to me.

So many people and too many places that’ll be sorely missed. Then again I’d wager most don’t even know or care to learn about a history of a place that’s close to resembling anything beyond deep contemplation of their own navels. Never divert your eyes from the screen. It’s the blinding bright movie of life. All our lives in a blended remix. Bright lights, little town. The mash-up of rich and poor, young or old, all could be your neighbor next door. Living the high life. The trip takes us tumbling through waves in the happy hour of lost and found last calls. Sweet harmony mingles with our collective dust and the detritus of good times in a big bad world. A slow fade out to the future. Listen to the sounds in your head. Try to remember. Stand perfectly still as the pictures flicker, moving quicker than yesterday’s promise.